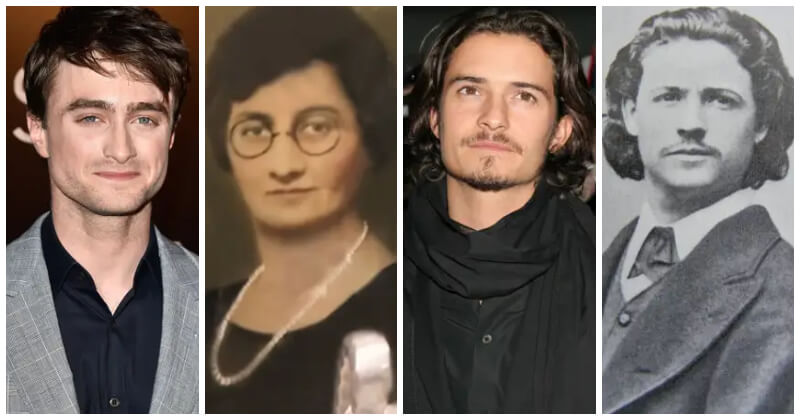 Time travel does not happen, there is no proof, and it’s all based on science fiction novels. No one has ever been able to travel across time or live an eternal existence.

Then an actual Civil War photo surfaced last year, the soldier’s similarity to actor Nicolas Cage caused quite a stir. Some people joke that this isn’t simply a humorous coincidence but that it poses some interesting considerations, like: Is Nicolas Cage a time traveler? And had he been warring for centuries?

But Cage isn’t the only celeb that has a historical look-alike. People have found plenty of other celebrities with their doppelgängers from the past. From John Travolta impersonating a man from the 1860s to Jay Z hanging out in Harlem in 1939. And some believe celebrities are vampires, others believe they are clones or progeny of past leaders, artists, philosophers, and even criminals.

We’ll find out who they are in this post. Remember to vote for the best celebrity look-alike, and “time traveler”!

#1 Keanu Reeves looks a lot like an actor from 150 years ago. Keanu Reeves is 52 years old, although he hasn’t changed much since his twenties. He also has a strong likeness to the 19th-century French actor Paul Mounet, leading some to believe they are the same person.

#2 Did Andrew Garfield engineer the Soviet takeover during the October Revolution and found a Marxist school of thought? Andrew Garfield has a striking resemblance to Leon Trotsky, right down to the swooped-up hair. His origins, however, cannot be traced back to Russia.

#3 Dan Radcliffe looks like a lot of stern-looking old ladies. In ancient photographs, Radcliffe resembles several individuals. In 2016, when Radcliffe attended Jimmy Fallon’s late-night program, Fallon showed up the images and had him respond to — and imitate — some of the characters in the photos.

The image above of a serious woman dressed in black, pearls, and what appears to be “Harry Potter” glasses is our fave.

#4 Oscar Isaac looks suspiciously like one of Raphael’s friends. #5 Bruce Willis may or may not have been the Supreme Commander for the Allied Powers. He looks just like Douglas MacArthur, the five-star general who commanded the United States and its allies throughout WWII.

Movie companies know who to cast in a future MacArthur biography.

#6 Nicolas Cage famously looks like this Confederate prisoner of war. In 2011, a Seattle man attempted to sell an image of Lt. Robert M. Smith, a Confederate prisoner of a war photographer who looked just like Nicolas Cage.
The eBay listing was titled “Nicolas Cage is a Vampire.”

According to The Hollywood Reporter, “Personally, I believe it’s him and that he is some sort of walking zombie/vampire, et cetera, who quickens/reinvents himself once every 75 years or so.” “In 150 years, he may be a politician, a cult leader, or a talk show presenter.”

In several of his films, Cage may have hinted at his existence as an eternal vampire. In the 1988 cult film “Vampire’s Kiss,” he portrayed a guy who believes he is a vampire, and in the 2010 film “The Magician’s Apprentice,” he played Balthazar, a 3,000-year-old magician.

Cage appeared on David Letterman’s talk program a few months after the photo was released to deny being an eternal vampire.

“Now, see, I don’t drink blood, and the last time I looked in the mirror, I saw myself,” Cage explained.

The assertion is rated “uncertain” by Snopes.

#7 Cage is allegedly in a centuries-long battle with John Travolta. A similar auction for a 150-year-old photo of a man who looked a lot like John Travolta appeared on eBay shortly after the Cage incident. Their eyes, hairline, facial shape, and preference for longish sideburns are all similar.

Both Cage and Travolta featured in the 1997 film “Face/Off,” in which they portrayed characters that tried to kill one other and changed faces, according to the AV Club. Perhaps it was a metaphor for their dissatisfaction with eternity and the monotony of living after a long life.

#8 Just how long has Jay Z been in Brooklyn? The photo “Harlem Loiters,” by Sid Grossman, was placed on the New York Public Library’s Schomburg Center for Research in Black Culture’s Facebook page, sparking a fury in the comments area. The unnamed individual in the center, according to fans, looks a lot like Jay Z.

The New York Times covered the entire incident in detail. In the meanwhile, Wikipedia maintains that Jay Z was born in 1969.

#9 Just when exactly did “Game of Thrones” take place? Peter Dinklage looks a lot like the figure in Diego Velázquez’s 1645 artwork “Dwarf Sitting on the Floor.” The facial hair, in particular, contributes to the likeness.

Dinklage likewise has a similar appearance to Velázquez.

#10 Mark Zuckerberg looks like a former king of Spain and Portugal. Velázquez had an uncanny ability to portray people that resembled prior celebrities. His image of a youngish Philip IV of Spain, who ruled from 1621 to 1640 and was also Velázquez’s patron, resembled Mark Zuckerberg in appearance.

They appear particularly similar in the photo above, which was shot while Zuckerberg was in Spain. The tennis champion resembles Shabazz, Malcolm X’s ex-wife, an educator, and a fierce civil rights activist in her own right.

Williams would be ideal in any historical drama about Shabazz, from his powerful jaw to his prominent cheekbones.

#12 Queen Latifah and Zora Neale Hurston had the same taste in hats. Coincidence? According to the Atlanta Black Star, Latifah’s preference for wide-brimmed hats is reminiscent of this photograph of Hurston, the author best known for “Their Eyes Were Watching God.” Could they be the same person?

#13 Conan O’Brien may have been making jokes since the Civil War. During the American Civil War and Reconstruction, he resembles Marshall Harvey Twitchell, a Union soldier, carpetbagger, and Louisiana politician.

#14 Rupert Grint resembles a fellow British artist — from 200 years ago. David Wilkie, a Scottish painter, had the same flaming red hair. His self-portrait from the early 1800s, when he was approximately 20 years old, demonstrates how much he resembles the “Harry Potter” actor. Berry made history in 2002 when she won the Academy Award for Best Woman for her role in “Monster’s Ball,” becoming her the first black actress to do so.

For her performance in “Carmen Jones,” Dorothy Dandridge became the first black actress to be nominated in that category over half a century before. During their Oscar appearances, both women had the same haircut style.

#16 Orlando Bloom looks a lot like one of the founders of modern Romanian painting. Orlando Bloom, around 2005, has long wavy hair, a confident brow, and a thin mustache that resembles Nicolae Grigorescu, a famous Romanian painter, writer, and soldier from the 1800s.

Bloom is also a passionate art collector. Perhaps it’s because he has some firsthand knowledge of the art form.

#17 Did Jack Black coordinate American militia forces before the outbreak of the Revolutionary War? Black, the humorous actor and voice of a kung-fu-knowing panda in the “Kung Fu Panda” film trilogy, looks strikingly like Paul Revere.

We don’t have any images of Revere because he lived during the Revolutionary War. The most renowned portrait is of him as a silversmith in Boston, painted by John Singleton Copley in 1768. Jack Black has a fascination with metals and collects antique coins as a pastime.

#18 The abolitionist movement had a lot of celebrity lookalikes. Ellen DeGeneres looks like Henry David Thoreau. Their beautiful eyes and swept-aside hair are identical. All Ellen needs now is a scruffy beard to play the author of “Civil Disobedience.”

#19 Donald Trump is not the only president Alec Baldwin can play. He sure does look like Millard Filmore, the 13th president of the United States, who was also from New York.

#20 Brad Pitt resembles the guy who made Rorschach inkblots. The actor resembles Hermann Rorschach, the Swiss psychologist who created the Rorschach test in the nineteenth century. They even have similar neckwear preferences. Brown resembles the notorious “Two and a Half Men” actor, who helped organize multiple slave revolts in the 1850s, most memorably with the movie-ready account of the attack on Harpers Ferry.

#22 Albert Einstein is usually associated with his unruly hair and a big mustache. But when he was younger, he looked quite a bit like Shia Labeouf. They both had naturally curled hair, a tiny chin, an intense stare, and a similar face shape.

In addition to acting, Labeouf has recently dabbled in high-concept performance art projects. Perhaps he’ll address the remaining flaws in the Standard Model soon enough. Who can say?

#23 Danny Pudi resembles some guy in a Berlin Wall documentary from 1962. The “Community” actor’s mother noticed the resemblance, and Pudi agrees. Is Pudi making a joke about his invincibility? Did he truly forget about his time manning the Brandenburg Gate during the Cold War?. Both have a powerful chin and persistent stubble. When comparing De Niro in 1993 to Rousseau in 1753, the likeness becomes even more apparent. Is it true that the actor who played “Taxi Driver” also wrote “Discourse on Inequality”?