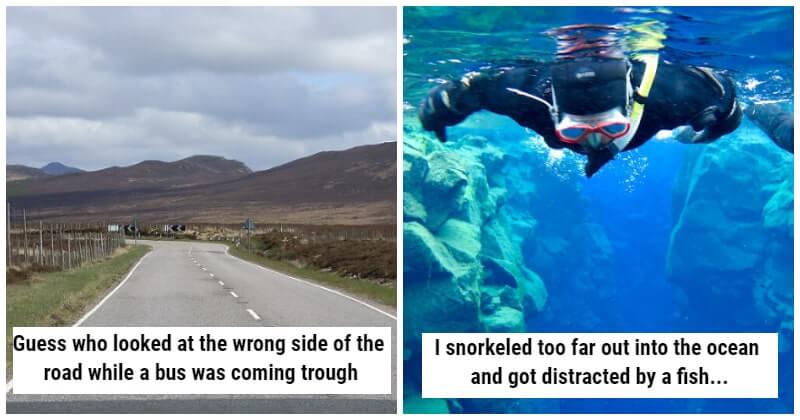 Death is inevitable, that is what Thanos said in The Avengers. And that holds true. We all die at some point in our  lives. Well, dying with style is a completely different thing. There are ways which people (almost) died, such as having a heart attack, or sniffing chemicals, that will surely make you appreciate life just a bit more and more careful with every move you take.

Here are 20 strangest, most WTF ways that people almost died that will shock you with just how strange some deaths could have gotten. Given the right time and place, anything could happen in this strange world.

#1 I snorkeled too far out into the ocean, and it wasn’t because it was a riptide, I just got distracted by pretty fish #2 Went to go visit a friend in Gloucester Mass in winter back in high school far from my home. I was planning on staying overnight at their house but their mother who I now know has mental health problems wouldn’t even let me in the house because the father “wasn’t home” working a night shift. Friend said sorry bro and closed the door. Almost froze to death waiting outside in 10 degree F at night. A cab driver saw me slumped on a bench and woke me up. Let me get warm and drive around in the passenger seat while he picked up drunk people out on the town all night. When he finished his shift he dropped me off at the train station and handed me 7 bucks for the fare. Dude probably saved my life and I can’t even remember his name #3 I walked into a back room freezer of a grocery store. The huge door was designed to close automatically. I knew this and went in and did what I was there to do. After 30 seconds, I couldn’t catch my breath. I thought maybe I was just working to hard so I stopped and took several huge breaths, nothing. I felt like I was drowning out of water. I had to move as quickly as I could back outside of the freezer and feel to my knees gasping when I got out. It was only afterwards I realized for some dumb reason someone kept open dry ice in a cart inside of the freezer. Dry ice removes oxygen out of the air in enclosed spaces. I almost died from lack of oxygen and would have been an icicle when they found me. Don’t f**k with dry ice #4 Being sleepy on the road. Don’t. Find a spot and sleep a bit. Seriously, it happened to me twice. You think you won’t fall asleep, but you will #5 Went to Grand Canyon and tried to be funny and acted like I was gonna slip,[it was snowing], and ended up almost really slipping and falling. Some random guy scolded me like a little kid because he got more scared than me #6 Stuck my head out the car window bc I wanted to see why dogs loved it. My grandpa didnt notice, rolled up the window, and I choked. He freaked out when he heard the cat like noises (ironic) I was making while my neck was trying to squeeze through the small opening of the window, but kept raising the window in his panic. Eventually he got it and I was left with a red mark on my neck and no closer to understanding dogs. My grandpa passed earlier this year so its a nice way to remember him and I know he’ get a chuckle to know people found it funny. it was meant to be funny so dont feel bad for laughing. My lil sis was in the seat next to me when this happened and she was laughing too, funny then, funny now #7 I was in 2nd or 3rd grade, I was getting off the school bus and was walking around to the other side to my driveway. Suddenly the bus driver hits the horn, scared the hell out of me and I stopped at the edge of the front of a bus and a dump truck good speeding around. I dunno if the dump truck driver didn’t see the lights of the bus or whatever but that driver made a dumb mistake that could have cost me my life. Thinking about it my older sister was up at our driveway waiting for me, probably would have messed her up for life. After that the school district changed bus routes to avoid students having to cross the road to get on or off the bus #8 Waited too long to go to the hospital (pre-Covid) I thought I just had a cold. Husband said, go to the doctor. I said no. Three days later, still not great. Husband said, go to urgent care. I said I will if I don’t feel better tomorrow. Next day, I tell husband, I need to go to the ER. A collapsed lung due to pneumonia.Three days in hospital plus breathing issues for the next year. Moral: Listen to your spouse. And yeah, got a whole lot of “I told you so”s. Deserved every one of them #9 While drunk, I sat down outside…to rest for a moment…on a freezing cold Winter’s night. Fortunately, a passerby noticed me and encouraged me to get inside. I figure I was probably there dozing for several minutes #11 Taking apart a dryer completely to clean it out and get it running smoothly again, dropped a screwdriver onto an exposed wire… huge arc and zap sound. I had left it plugged in (up until I realized the incredibly smooth-brained move I had pulled) #13 I almost drowned in the sea as a kid. A current pushed me away from the shore. Lifeguards saved me and were slapping my face. I thought it was a punishment but they were resuscitating me #14 Started hiccuping with peanut butter in my mouth. Peanut butter went down the wrong tube, I started choking, but couldn’t cough bc these hiccups wouldn’t f**king stop. Finally leaned over and managed to cough it out, but it was a close call #15 I’m Italian but have been living in the UK for two years. Guess who looked at the wrong side of the road while a Bus was coming trough? Everytime I went back to Italy I risked my life for the same reason by getting used to drive to the left and vice versa #16 Swam under a shipyard pier at night (solid concrete above me) and lost my sense of direction. Got lucky and found my way out. To add more detail – A friend and I were “assault swimmers” attacking a ship for a training exercise at night. We would swim from pier pylon to pylon underwater. Take a breath, go under, push off, and swim ~20′ to the next pylon, surface and repeat. My mask broke and I was doing it with my eyes closed due to having contacts at the time. One time I just kept swimming and felt like I missed the pylon. When I went to slowly broach the surface I found myself under the concrete above. I had no idea the pier was even built like that. Put my hands up and oriented myself. It looked dark in all directions but my gut told me to the right is where I came from. After that, I stayed on the surface! Cheers! #18 I stuck my head in a random beaker to sniff something in chem lab, I have been very good about wafting since #19 Yelling at someone in the hood, they tried to run me over with their car and then got out and chased me #20 Grown adult and choked on mozzarella cheese. Was only alone for 20 minutes. Can’t imagine the obituary Behold, The Best Roleplay Flirting Texts That Can Make You Cringe Constantly

Incredible Makeup Transformations That Prove “Every Woman Is A Hollywood Star”

There Is Always A Hidden Boy In Every Man, And These 22 Funny Pics Can Prove That

25 Hilarious ID Pics That Deserve To Be Stamped In History

21 Elderly People Who Are Incredibly Strong And Cool

Being Parents Has Never Been An Easy Journey, But Who Knows It Gonna Be This Hilarious