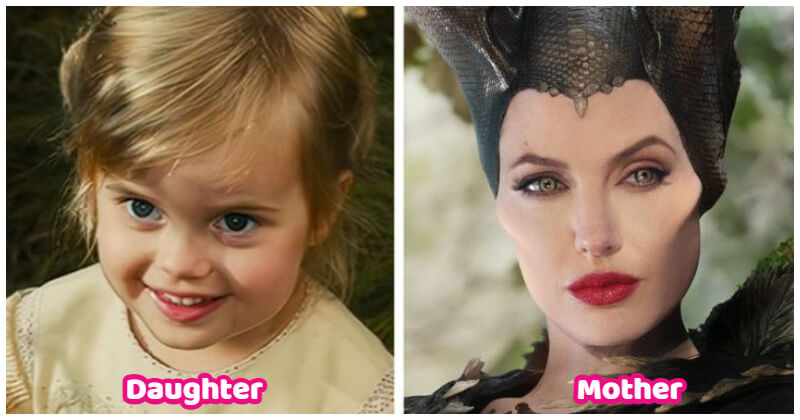 For some of us, working with our parents sounds like a weird idea. But what if you come from a famous acting family? Many actors have starred with their children in some projects and these kids often make cameo roles. The kid may also appear as either a younger version of the parent or as the parent’s child in the movies. There is a strong resemblance between them so the movie is more fantastic.

There are some Hollywood stars that shared screen time with their children. For instance, Demi Moore made the controversial decision to go for her real-life kid, Rumer Willis to play her daughter in the drama Striptease or, Eugene Levy teamed up with his son, Dan Levy, to star in the popular Canadian sitcom Schitt’s Creek.

Here are 10 actors and actresses who played with their kids in the same movie that we even didn’t notice it. Vivienne Jolie-Pitt, Angelina Jolie’s daughter, played young Princess Aurora. In an interview, Jolie explained that the five-year-old only got the part and Vivienne was the only child who wasn’t terrified of Jolie in her getup. She said “But the other three- and four-year-old [performers] wouldn’t come near me. It had to be a child that liked me and wasn’t afraid of my horns and my eyes and my claws. So it had to be Viv.” The 12-year-old version of Lydia is played by Vivian Falcone, the daughter of McCarthy and Falcone. In an interview for the Thunder Force press, Falcone shared: “McCarthy and I kept Vivian out of acting but she’s very good at it. We needed a person to play a twelve-year-old Lydia and Vivian is a dead ringer for Melissa at that age. She’s like her mom in that she can stay in the scene.” Alice Richmond, the 7-year-old daughter of Tina Fey made a surprise appearance on the hit show, playing a young version of Liz Lemon. The flashback scene showed Alice wearing a blue dress and matching headpiece. Alice certainly inherited plenty of gestures from her mom like rolling the eyes. In Evening (2007), Mamie was given her first starring role as young Lila Wittenborn with her mother, Meryl Streep playing the present-day version. They are considered to have the same smile and gesture.

#5 Mark Sheppard and William Morgan Sheppard in Doctor Who William Morgan Sheppard played the older version of Canton Everett Delaware III in the eleventh Doctor episode of Doctor Who titled The Impossible Astronaut. His son, Mark Sheppard, played the younger version of the character. #7 Annie Starke and Glenn Close in The Wife In The Wife, Annie Starke, Glenn Close’s daughter, played a younger version of Close. It’s the 30-year-old’s first major movie role, and the two collaborated closely on developing the part. Close told to her daughter: “You’re the one who has to lay down the character. You play the young Joan. So whatever you do in the flashbacks has everything to do with how I am later”. In Dead Man Walking, the nun was portrayed by Sarandon and Amurri, Sarandon’s daughter had a small role in the film, playing her mother’s character in the youth.

#9 Domhnall and Brendan Gleeson in the Harry Potter series Domhnall is probably better known for being savaged by a werewolf as a Weasley brother in the Harry Potter film. However, no one notices that he is Brenda’s son. Brenda played Alstor in the series. Johnny Depp appeared alongside his 15-year-old daughter, Lily-Rose Melody Depp, in the comic-book film Yoga Hosers. Lily-Rose played a 15-year-old yoga nut who had an after-school job at a Manitoba convenience store. Jonny Depp embodied a legendary man-hunter from Montreal named Lapointe to fight for his life and a grade 12 party.

Everything About ‘Falling For Christmas’ – The Return Of An Icon: Lindsay Lohan

What If The Legendary Grumpy Cat Stepped Into Disney Movies And Got In The Way Of Those Happy Endings?