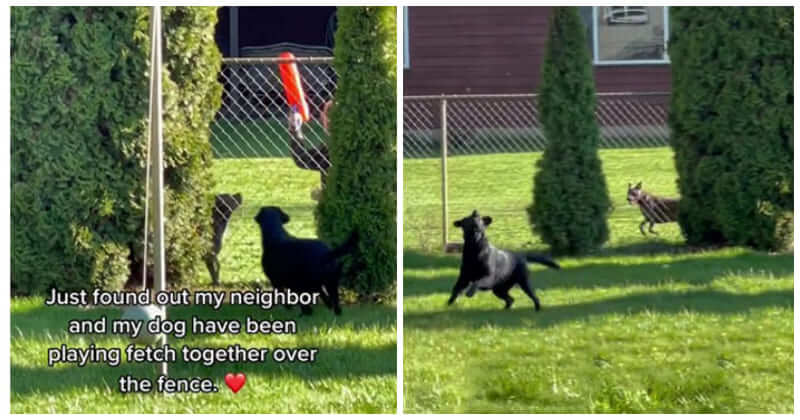 There are a lot of factors to consider when we are going to move to another place, one of them is the neighbors, who can pretty much affect the way we enjoy the new home. It’s important to know the neighbors you’re going to live with because you know better than anyone else you get along with one (or some) particular types of people, not others. Unfortunately, if you can’t get on with your neighbors, you’d better avoid any quarrels you two may have. But if you and your neighbors do match up, it can be true bliss.

Today, let us tell you an example of a good friendship between neighbors, more specifically, between a dog named Bounder and a man who lives next door.

Bounder is a 5-year-old black Labrador. He is living with a tender mom, Brittney Reynolds, and enjoying fun activities with his family. One of his favorite pastimes is playing fetch, according to Reynolds. “He’s obsessed. He will play fetch until I make him stop.” With his playful personality, there’s no surprise that Bounder is very easy to make friends. He adores everyone he meets and likes spending time with anyone who plays fetch with him.

One day, Reynolds heard the dog barking at something and decided to investigate what it was. However, when she went to the garden, she was totally melted.

It turned out that Bounder was barking at a neighbor “sitting on his back patio with a ball gun on the table”. It seemed that he’d been playing with his own dog, and therefore, caught Bounder’s interest through the see-through fence. He picked up Bounder’s love of fetch and indulged it. “I tried to tell him to stop barking, but the neighbor got up and started shooting the ball gun for him. It was just so cute. I went and thanked him for playing with my boy and found out that they had been doing this for a while,” the woman recalled the moment. Certainly, the scene Reynolds caught that day is the sweetest thing some of you have ever seen. Watch it now.

@brittneygoes He brings it back to the edge of the fence. #blacklab #doglover #SeeHerGreatness ♬ Home – Edith Whiskers

The video shows that humans are not the only ones that make friends. Dogs are able to form bonds with animals of other species. The friendship between Bounder and the neighbor and his dog has become solid. Now, they often play fetch together whenever they have a chance. Recently, Bounder has spent a playdate with Lila the neighbor dog. @brittneygoes The moment TikTok’s been waiting for. Bounder and Lyla had a play date. #doglover #OscarsAtHome #blacklab #staffordshire ♬ Just a Cloud Away – Pharrell Williams

“I’ve seen him outside looking for the neighbor since then,” Reynolds said. “He’s a sucker for a game of fetch.” Don’t forget to share this sweet story with your family and friends.

Meet Wiley, The Adorable Dalmatian With A Heart-Shaped Nose And People Are In Love