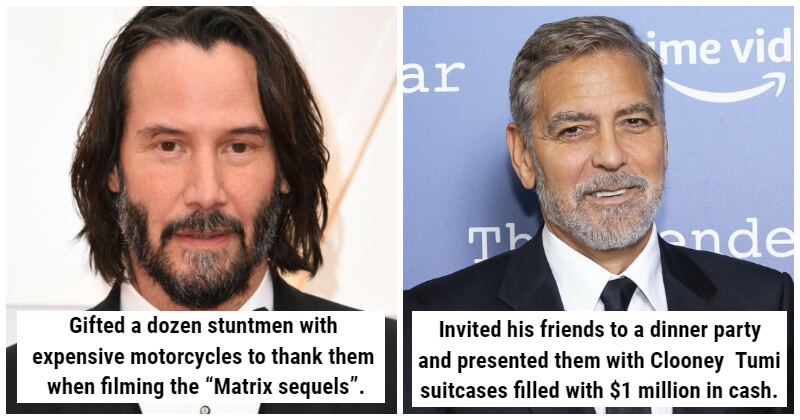 Meeting a famous celebrity may be a dream of many people but working with them is even more fascinating. However, not all celeb bosses are good bosses. Some famous people make headlines for mistreating their employees or refusing to pay extra hours. Luckily, there are still celeb bosses who are great bosses. They are willing to give their staff bonuses or give them a house! Can you believe that? Let’s find out who they are and comment on the celeb bosses that you would like to work with in the comment section! Angelina Jolie is one of the most powerful women in the American entertainment industry, and she is also a good boss. Her former personal assistant, Holly Goline, said she couldn’t complain about her boss. In 2004, Angelina Jolie attended Holly Goline’s wedding. They got pregnant during the same period, and they often looked like best friends when they were out. In addition,  her ex-husband, Brad Pitt insisted that Angelina Jolie was a good director when they worked on “By the Sea” together. It is obvious that Angelina Jolie is an outstanding representative of a modern woman who is not only a good mother but also a good boss and a good actress. Oprah was known as the greatest black philanthropist in U.S history and the ultimate self-made business leader. Srini Pillay, a professor of psychiatry at Harvard University said she was a remarkable businesswoman. She is uniquely able to inspire her team and she knows how to motivate people. Before people start talking about equal pay in the 80s, Oprah even went on a strike to get her producers higher payments. I’m sure that if we had a chance to work with her, we would learn many from her. Kate Moss is a British supermodel and a great businesswoman. She is also a good boss that every employee would love to work with. When her assistant, Fiona Young, got pregnant and wanted to resign to take care of her baby, Kate Moss was very supportive. According to Rihanna’s crew, she is the greatest boss in the world. In honor of Boss Appreciation Day, her employees put balloons in her office to give her surprises. Rihanna makes her team better in the workplace and even hangs out with them after the workday is done. At her assistant’s wedding in April 2015, Rihanna was a bridesmaid and supported her assistant throughout the big day. Hudson is definitely a generous boss. On Christmas, she gave her assistant, Walter Williams, a house. According to New York Daily News, they met as classmates at Chicago’s Yale Elementary School. “Walter and I have been friends since sixth grade”, Hudson told the Advocate, “He’s by far my closest friend”. Keanu Reeves is not only a great actor, but he is also a generous boss that everyone would like to work with. When filming the “Matrix sequels”, the contract included a significant pay cut for the actor so that more money would be available for costumes and special effects in the films, but Reeves had no problems with that. He even gifted a dozen stuntmen with expensive motorcycles to thank them. When it comes to being a leader, Parton has spoken about her desire to “live an example” for others. She said instead of telling other people what to do, she prefers to lead by example: “I’d rather be an example rather than just try to tell somebody to do this, do that because I don’t think that’s right. Everybody’s different. You’ve got your own journey.” In addition, she is also a friendly boss. She hopes her employee feel comfortable approaching her. Kenny Chesney has a healthy lifestyle and he is focused on his tasks, so he is looking for employees who have the same characteristics as him. He said his employees should be solid people who aren’t on drugs. Likewise, he also treats his employees very well. At the end of each year, he takes his crew, merch, catering, and management staff to the Virgin Islands for a week. Moreover, he appreciated all the employees who work with him and said that his crew is such a close-knit family. George Clooney is not only a great actor but he also has good characteristics. When his movies became a big hit, he decided to express his gratitude to his friends and his business partners, who helped him in those hard days. Clooney purchased 14 Tumi suitcases and filled each one with $1 million in cash. He invited his friends to a dinner party and presented them with the suitcases. Contrary to the evil boss role Sandra Bullock acted in the film: The Proposal, she is a good boss in real life. She never forgets to give her staff some bonuses and even remembers the birthdays and giving gifts to her employees.