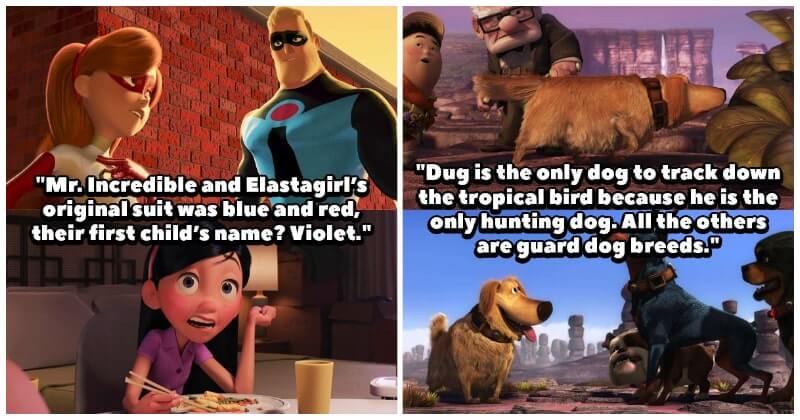 Who doesn’t know Pixar films? For many years, Pixar has captivated the audience with its amusing and easy-to-understand animated films. However, the animation company is recognized for more than just colorful characters and captivating tales, it’s also known for hiding Easter eggs in its movies.

On the Internet, Pixar fans have shared a lot of references that hint at the studio or past and future Pixar films. And most of them are familiar with the obvious details that feature in every Pixar film. For example, The Luxo ball, which has become a symbol of Pixar; the Pizza Planet truck, which appears in their first feature-length film “Toy Story,” and “A113” – the classroom of many a Pixar graduate,…

But only eagle-eyed fans might have discovered the Easter Eggs and references in these movies. Scroll down to find out what they are. And if you have found other Easter eggs, share them with us in the comment section below!

#1 After Luxo Jr.’s “round” lightbulb goes out, Wall-E replaces it with an environmentally friendly bulb. #3 Dug is the only dog that can successfully track down the tropical bird (Golden Retriever) because he is the only hunting dog. All of the others are breeds of guard dogs. #4 Ellie’s things are rounded, whereas Carl’s are square, and that goes well with their respective character designs. This is due to the fact that he is a Skunk Cleaner Shrimp, which means he consumes dead tissue and other organisms. This species is known for not being able to handle captivity well, so it makes sense that he is the one who constantly comes up with escape plans. Because in the wild, male sharks mate with the female and then leave, baby sharks never know their father.

#9 In “Ratatouille”, the dog barking at Remy maybe Doug from “Up” In Mandarin Chinese, 包 (pronounced “Bao”) means dumpling. However, this pronunciation is made by 宝, meaning “treasure” or “baby”, and 保, meaning “protect” Or “defend”.

#11 While Wall-E was organizing his findings in his home, we can see Rex

#14 Elastagirl’s Original suit was red, and Mr. Incredible’s suit was blue. Why the name of their first child is Violet? #15 In “The Incredibles 2”, Helen’s hotel room painting is an illustration of her separation from the family #16 Director Brad Bird wanted to give Dash a realistic out-of-breath voice in some scenes in “The Incredibles” (2004), so he made actor Spencer Fox run four laps around the Pixar studio until he was exhausted.

#17 One of the toys featured in Pixar’s 2010 film “Toy Story 3” is a stuffed Totoro doll from Studio Ghibli’s “My Neighbor Totoro.” #19 This glue in “Toy Story 4” is written that it was made in Emeryville, California, which is home to Pixar Studios #21 The carpet of Sid’s house in “Toy Story” (1995) was designed to appear exactly like the carpet at the Overlook Hotel in “The Shining”(1980)- the horror film across the Pixar franchise. #22 In “Toy Story 3”, Sid makes an appearance, revealing that he has gotten a job as a garbage collector. #23 Andy measured the height of his various toys against the door jamb in one close-up shot. #24 The recording process for the character Boo was very difficult In “Monsters, Inc.” (2001) It was difficult to get Boo’s voice actor Mary Gibbs to stay in the recording booth because she was so young. So they decided to follow her about with a microphone and splice her lines together using the random noises she makes while playing.

#25 Screams, which appear as a gaseous state in the Scream Tanks, give Monsters U their power. Because power here is gas, light switches are valves, and pipes replace wires. #26 In Riley’s imagination, the playing cards feature her father’s face as King, her mother’s face as Queen, and her own face as Jack

#27 After “Cars” (2006) lost the Oscar for Best Animated Film to “Happy Feet” (2006), Pixar included a “Quality Assurance Guarantee” at the end of “Ratatouille” (2007) to remind the Academy that they manually animate every frame of their films. #29 A collection of Pixar characters’ pietas may be seen hanging from a building in “Coco” (2017).