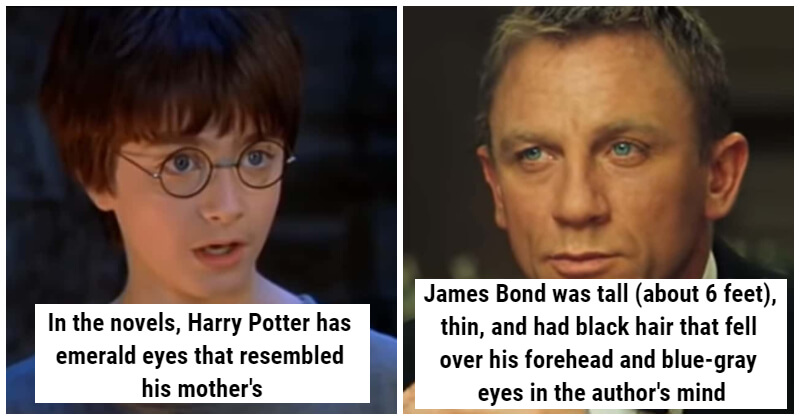 Sometimes, adapting a beloved book into a movie is much more difficult than making an original piece. It’s because the adaptation has to stay true to the source. For the novel’s fans, the most common mistake in an adaptation is that some actors don’t fit the physical description of their characters in the books.

So, we’ve compiled a list of actors and actresses who do not look or act like the characters fans expect to see. We’ve included characters like Tom Cruise as Jack Reacher from “Jack Reacher”, Dakota Fanning as Jane in “The Twilight Saga: New Moon”, Daniel Radcliffe as Harry Potter in “Harry Potter” and more! Daniel Radcliffe has many of the physical characteristics of the Harry Potter character created by J.K. Rowling. However, there is one significant difference. In the novels, Harry’s emerald eyes are much important. Rowling had indicated the color of his eyes, and the fact that they resembled his mother’s. However, Radcliffe has vivid blue eyes, and the color contacts that the previous film’s makers tried to persuade him to wear didn’t work – his eyes reportedly reacted quite badly.

#2 Shailene Woodley as Beatrice ‘Tris’ Prior in “The Divergent Series”

The Divergent Series (including “Divergent”, “Insurgent”, and “Allegiant”) is a science fiction action film based on Veronica Roth’s novels of the same name. Tris is described as having blonde hair, a long, thin face, and big blue eyes throughout the novels. But Shailene Woodley, the actress who plays her in the movie, has brown hair, hazel eyes, and an oval face. And in the novel Insurgent, Tris cuts her hair to chin length, but her hair is a pixie cut in the film of the same name. Daniel Craig is widely considered one of the best actors to play James Bond, and for which he won a BAFTA nomination for Best Actor. However, he hardly resembles the way the author Ian Fleming envisioned the character. Bond was tall (about 6 feet), thin, and had black hair that fell over his forehead and blue-gray eyes in the author’s mind. On his right cheek, he also had a lengthy scar. However, Craig has dark blond hair that does not fall over his brow and is shorter and more muscular than Fleming imagined the character to be.

#4 Tom Hanks as Robert Langdon in “The Da Vinci Code”

Robert Langdon is described as 6 feet tall, with the slender, toned figure of a swimmer, thick, long black hair with some gray, piercing blue eyes, a careless smile, and an arrestingly rich baritone voice in Dan Brown’s best-selling novel The Da Vinci Code. And Tom Hanks does fit part of that description. He stands 6 feet tall and had graying black hair when the film adaptation of “The Da Vinci Code” was published. But he didn’t have the physique of a swimmer, and while his speaking voice is low, it isn’t very deep.

However, the author has said he was very lucky to have Hanks play Langdon, calling him one of the “great living American actors.” In her classic novel, “Frankenstein”, author Mary Shelley described the monster he has created: “His limbs were in proportion, and I had selected his features as beautiful. Beautiful! Great god! His yellow skin scarcely covered the work of muscles and arteries beneath; his hair was of a lustrous black and flowing; his teeth of a pearly whiteness; but these luxuriances only formed a more horrid contrast with his watery eyes, that seemed almost of the same color as the dun white sockets in which they were set, his shrivelled complexion and straight black lips”.

However, the 1931 film was based on Peggy Webling’s 1927 theatrical version of Shelley’s book. Boris Karloff’s skin also covers the muscles and arteries more completely, his eyes are plainly a different color than the sockets, his lips aren’t black, and his face is scarred but not shriveled.

#6 Jack Nicholson as Randle Patrick ‘R.P.’ McMurphy in “One Flew Over the Cuckoo’s Nest” Source: One Flew Over the Cuckoo’s Nest

According to author Ken Kesey, Randle Patrick McMurphy is an iconoclast and nonconformist. He is a 35-year-old redhead from Ireland with a wild side.

Jack Nicholson, who earned an Academy Award for his performance as McMurphy in the film adaptation of “One Flew Over the Cuckoo’s Nest”, was not the first choice for the role. The dark-haired Nicholson does not physically like the red-haired Irish American depicted in Kesey’s novel, and the author was not pleased with the casting, believing Nicholson was unfit for the part. Elizabeth Bennet is characterized as an intellectual 20-year-old lady with “a lively, playful disposition, which delighted in anything ridiculous” in Jane Austen’s novel “Pride and Prejudice.”
Keira Knightley did an excellent job conveying the spirit of Elizabeth Bennet in the 2005 film adaptation and she won an Academy Award nod for her performance. However, Knightley is a stunning lady who would never be described as merely “tolerable.” In fact, the film’s director, Joe Wright, refused to cast her in the role because he thought she was too attractive.

#8 Humphrey Bogart as Philip Marlowe in “The Big Sleep” Philip Marlowe, a private detective, appears in numerous of Raymond Chandler’s short tales and books. Marlowe is depicted as a man in his late 30s who stands “slightly over six feet tall” and weighs around 190 pounds. He is a strong drinker who appears to be a rugged, world-weary, intellectual loner on the surface.

In the film adaptation of “The Big Sleep,” Humphrey Bogart plays Marlowe, who looked every bit his 45 years and, at 5 feet 8 inches tall, was far from tall or lanky. Despite this, the actor received positive feedback for his performance, and the film was a box office triumph. Skeeter is the protagonist in Kathryn Stockett’s novel “The Help”, but she isn’t the only one. The book is broken into three portions, each with a different character telling the story. In the novel, Skeeter is a tall, lanky girl with a crooked nose and frizzy red hair. Emma Stone, aside from having red hair that isn’t frizzy, doesn’t fit this description of Skeeter in any way. Lee Child has published 20 novels centered on the character of former US Army MP Jack Reacher. These books were made into two feature films, “Jack Reacher” (2012) and “Jack Reacher: Never Go Back “(2016), both starring Tom Cruise as the main action hero.

In the novels, Reacher is portrayed as a big guy who stands 6 feet 5 inches tall, has a 50-inch chest, and weighs between 220 and 250 pounds. Meanwhile, his face “looked like it had been chipped out of rock by a sculptor who had ability but not much time.” Obviously, this isn’t a description that suits Cruise, who measures approximately 5 feet 7 inches tall and is still thin and boyishly attractive in his 50s. Reacher is characterized as having dirty blond hair and blue eyes, whereas Cruise has dark brown hair and green eyes.

#11 Dakota Fanning as Jane in “The Twilight Saga: New Moon”

In “New Moon”, one of the books in Stephenie Meyer’s Twilight series, Bella described Jane: “The newcomer was as tiny as Alice, with lank, pale brown hair trimmed short. The body under the cloak – which was darker, almost black – was slim and androgynous. But the face was too pretty for a boy. The wide-eyed, full-lipped face would make a Botticelli angel look like a gargoyle. Even allowing for the dull crimson irises. Her size was so insignificant that the reaction to her appearance confused me.”

But in the films, Dakota Fanning who played Jane did not look androgynous, had blonde hair, and, while she isn’t tall (5 feet 4 inches) and is slim. Edward Rochester is one of the most memorable figures in 19th-century English literature. He is the dark and gloomy employer and love interest in Charlotte Bront’s Jane Eyre. In the novel, he is compared to a wild beast or bird, and is characterized as an unsightly, pigeon-chested guy of around 35 with a dark, stern, and craggy countenance, a heavy brow, and shaggy black hair. He loses a hand and is momentarily blinded as a result of the fire at his manor.

“Jane Eyre” has been adapted into dozens of feature films and the most recent feature film adaption was released in 2011, starring Michael Fassbender as Rochester and Mia Wasikowska as Jane. Cary Fukunaga, the film’s director, admitted that there were actors considered for the role of Rochester who looked more like the character than the light-haired, German-Irish actor with the decidedly non-craggy facial features, but he ultimately cast Fassbender because he had “the spirit” of the character. The film “The Running Man” (1987) is based on Stephen King’s novel of the same name. Several cinematic versions of his book have been panned by the author, including “The Shining”, “The Lawnmower Man”, and “Firestarter”. The author has disliked them because the film preserves virtually little of the novel and he believes Arnold Schwarzenegger is not the ideal actor to play protagonist Ben Richards.

In the novel, Richards is a regular guy who enters the game show in a desperate bid to lift his family out of poverty. He’s regarded as skinny, nearly pre-tubercular in appearance. This is the polar opposite of Arnold Schwarzenegger’s muscular appearance in the film. In the film, the character’s motivation is likewise very different. After being falsely accused of a slaughter during a food riot, Schwarzenegger’s Richards seeks vengeance on the authorities.