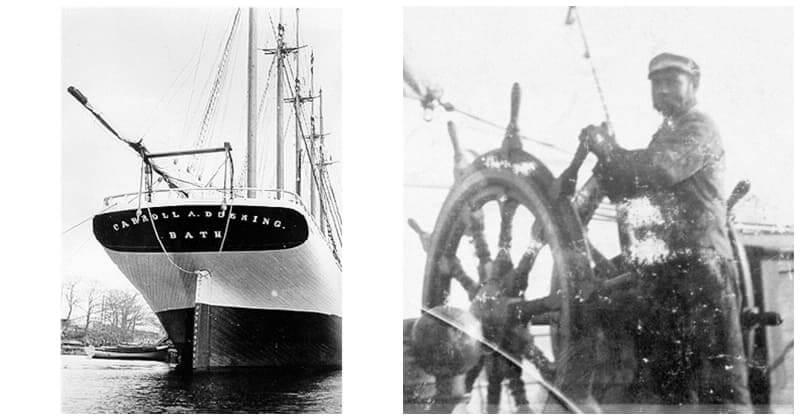 The most fascinating mysteries are the ones that remain mysterious forever. Upon its first discovery in 1921, the Carroll A. Deering had its crew vanished and its hull run aground on the treacherous rocks of Diamond Shoals, while speculation ran wild. That speculation continues to this day, and no satisfactory explanation for the crew’s disappearance has ever been proven. In August 1920, five months before the five-masted schooner was discovered abandoned off the coast of present-day Cape Hatteras National Seashore, the Carroll A. Deering set sail from Norfolk, Virginia, in tip-top shape, with an experienced captain and a crew of 10 men bound for Rio de Janeiro with a cargo of coal. The ship departed on August 22, and although Captain William H. Merritt fell ill a few days later and had to be replaced by the hastily-recruited Captain W. B. Wormell, the ship delivered its cargo on schedule and set sail to return in December.

A lightship keeper named Captain Jacobson aboard the Cape Lookout Lightship in North Carolina sighted the vessel bound for its home port on January 29, 1921. The Carrol A. Deering hailed the lightship, and an unidentified crewman reported that the ship had lost its anchors. Captain Jacobson took note of this, but was unable to report it due to his radio being out. He would later describe the crew of the Carroll A. Deering “milling around” suspiciously on the fore deck of the ship. Two days later, on the morning of January 31, C.P. Brady of the Cape Hatteras Coast Guard Station spied the schooner aground and helpless on Diamond Shoals, its sails still set and its lifeboats missing. Rough waters kept surf boats from reaching the wreck until February 4, when C.P. Brady’s initial suspicion proved correct: The Carroll A. Deering was abandoned.

The crew had vanished like ghosts. Gone with them were personal belongings, key navigational equipment, some papers, and the ship’s anchors. Despite an exhaustive investigation by the FBI, no trace of the crew or the ship’s logs has ever been uncovered.

To this day, the Carroll A. Deering is one of the most discussed and written-about maritime mysteries of the 20th century, its enduring popularity no doubt fueled by the complete uncertainty as to how the ship arrived at its fate. Often called the “Ghost Ship of the Outer Banks,” the Carroll A. Deering remains an unsolved mystery. Accounts of the crew’s alleged dissatisfaction with new captain W. B. Wormell have led to speculation that a mutiny may have occurred, while the FBI’s investigation turned up leads ranging from Bolshevik-sympathizing pirates to rum-running gangsters, all of which turned out to be dead ends. Some people have even suggested that the notorious Bermuda Triangle was to blame.

The wreck of the Carroll A. Deering was dynamited and scuttled in March 1921 to keep it from becoming a hazard to other vessels, and whatever answers may have once existed are likely long gone.

What Is A Kept In The Peripheral? Fully Explained