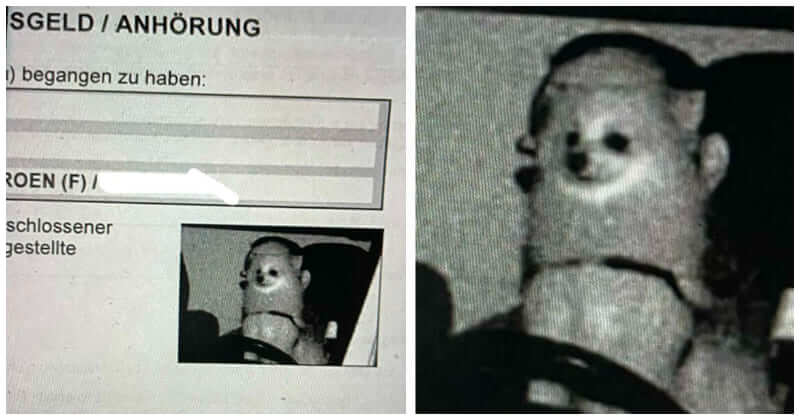 If you received a picture of your dog on a car wheel, how would you react to it? Perhaps, you’d be extremely confused saying “it can’t be real” asking “how”, and “why”… But, those are just normal reactions when people see something unbelievable.

A German motorist has recently received a speeding ticket by mail with a picture that completely blew his mind.

A traffic camera captured a scene when his car was driven not by a normal someone but a white dog. The perplexing picture was sent with a document provided to him showing that his vehicle exceeded the posted limit, but what caught his attention was certainly the dog. The picture showed the dog on the wheel with no one in the passenger seat. It was strange, wasn’t it? The fact that the lovely white dog appeared to drive the man’s car made him confused but a little excited. He shared the picture on Twitter.

It turned out, the dog belong to the Twitter user’s uncle, who was as confused as anyone else to see his pet caught for speeding. “My first reaction was: ‘That can’t be real,’” said the Twitter user. “I think my uncle was just as surprised.”

But, are you wondering how the dog got to the wheel, and how it could drive the car while it apparently couldn’t. Well, the fact was a bit different from what you think.

The uncle was actually the one who drove the car while his dog sat alongside him. It jumped on the uncle’s lap at the exact moment they passed the traffic camera, and that was how we got a hilarious picture to laugh at.

“Normally, the dog wears a special car belt for safety. That day, my uncle forgot to put it on him, and the dog came to cuddle him [as he was driving]. The funny part is, he was in his lap for just three seconds,” told the nephew.

In the end, the uncle decided to pay the fine although he could have contested the ticket. We are sure he was happy with his choice.

Share this interesting moment with your family and friends.