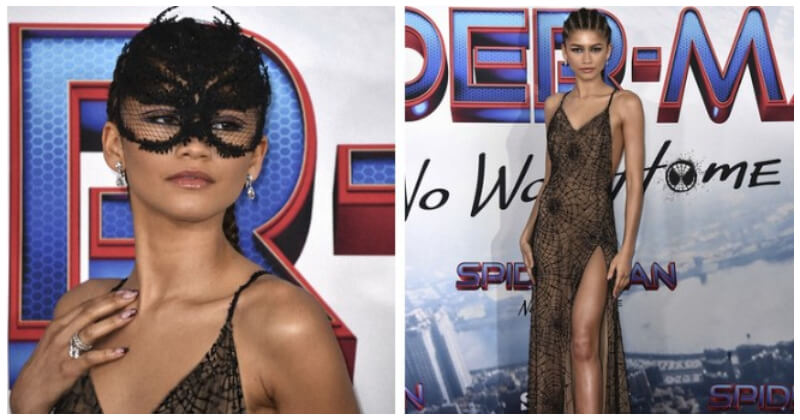 For many celebrities, especially actors and actresses, the red carpet is a great place to promote their popularity. When a red-carpet event comes, celebs often wear unique and eye-catching outfits to make themselves to be the center of attention. Apart from the luxurious outfits of brand-name stores, some celebs step out in customs which can remind people of the movie they are playing.

For example, Cinderella’s Lily James wears Christian Louboutin glass slippers or Brie Larson who played Carol Danvers in “Captain Marvel 2” puts on a custom Valentino gown emblazoned with the superhero’s star logo. Clearly, these celebrities whose red-carpet looks have been inspired by their movies.

Scroll through to see 12 celebrities whose red-carpet looks have been inspired by their movies. At the premiere of Spider-Man: No Way Home, Zendaya dazzled everyone in a Valentino dress. She wore a delicately embroidered grown covered every which way with cobwebs, paired with a superhero mask. As the cameras flash, all eyes are on her. Keira Knightley is a fashionista and her appearance at the premiere of the Nutcracker and the Four Realms was proof of that. She turned up at the event in a beautiful white gown. Her stylist depicted it as “candy floss and cake-like”. Emma Watson wore a simple outfit on the red carpet. It referenced Beauty and the Beast’s iconic through accessories instead, with a gold rose pin and its leaves at the hip. The actress’s hairstyle was complemented with hairpins in the shape of leaves. Lily James, the famous British actress, embodied the Disney princess she played on screen for the “Cinderella” movie’s premiere. She put on Christian Louboutin glass slippers and a Charlotte Olympia clock bag. She gave her princess shoes a shout-out on the red carpet and after the premiere, the Cinderella-style shoes appeared on the shelves of brand-name stores. Angelina Jolie channeled her evil character’s style at the premiere of Maleficent: Mistress of Evil. She appeared in a Versace black dress with a 50-carat diamond and sliver scorpion brooch sitting on her hip. She really stood out on the red carpet. Elle Fanning’s Gucci moment at the Maleficent: Mistress of Evil premiere was a reference to “Sleeping Beauty”. She gave tribute to her character Aurora with the help of a Gucci dress. Her gloves were designed with drops that was hinting at Aurora’s fateful trauma. At the premiere of “Mary Queen of Scots”, Margot Robbie wore a polka-dotted dress with beaded red roses on her waistline. Fans can recognize it as a reference to the Tudor rose, the emblem of Elizabeth I’s family, the famous royal she portrayed in the movie. For Aquaman, Amber Heard transformed herself into an ocean queen. At the London premiere of Aquaman, she put on a striking green brocade Valentino dress, complete with a matching swimming cap. Her outfit was a great way to have fun with the red-carpet style. Timothée Chalamet wore an outfit with two Cartier brooches to the Venice Film Festival. The design of the jewelry was matched to the world of Dune. The first brooch looked like a sword from 1913 while the second resembled the flying devices of planet Arrakis. At the premiere of Captain Marvel in March 2019, Brie Larson stepped out in a custom Rodarte gown. Her dress was white and it was covered in embroidery featuring Captain Marvel’s eight-pointed star. her earrings also resembled the stars. Neil Patrick Harris’s suit impressed everyone at the premiere of The Matrix Resurrections. He wore an ombre suit and paired it with a matching turtleneck underneath, straying away from traditional black-tie attire. The colors of the suit resembled the “calling card” of the flick – the constantly changing digit combinations in the Matrix. Daisy Ridley hit the red carpet for the World Premiere of Star Wars: The Last Jedi in a sequined Monse dress. The dark blue dress resembled the night sky and it was glittering and covered in stars. It was suitably intergalactic in theme with the sci-fi blockbuster.