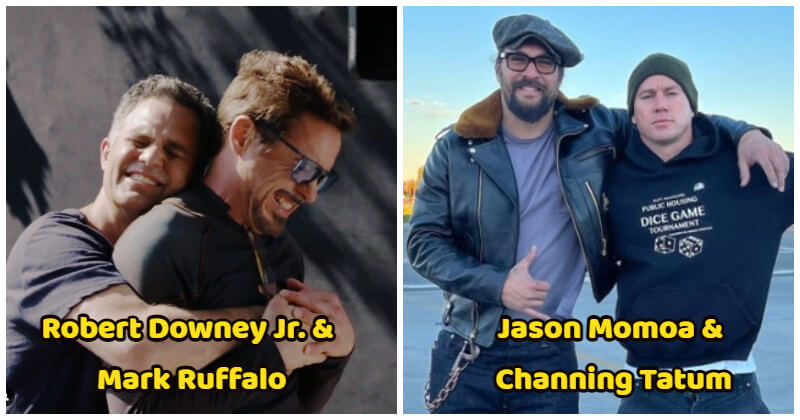 Some studies show that men often feel more comfortable being themselves around bros than they do with their partners. For some, girlfriends or even wives can come and go, nothing beats the reliability of a bro.

In Hollywood, there are many bromances that have got us astonished at how tight they are. For example, James Franco and Seth Rogen have been friends for around 2 decades, and Patrick Stewart and Ian McKellen have known each other for more than 4 decades. Apart from them, a lot of male celebrities are in bromance. It’s more adorable when they don hesitate to praise each other in interviews or on social media.

Check out now our list of 15 male celebrities whose bromances stand the test of time! Jason Momoa and Channing Tatum have had such a beautiful friendship. The People revealed, “Channing and Jason have known each other through mutual friends for years. They run in similar circles and are both friends with a lot of stunt guys in the industry”. Recently, Momoa has shared photos of him and Taum preparing to board a flight .rityrit Lenny Kravitz and Momoa have both been in a relationship with Lisa Bonet. Two months after Jason Momoa and Lisa Bonet announced their breakup, Lenny Kravitz proved his friendship with the Aquaman star is still going strong. Lenny shared “People can’t believe how tight Jason and I are, or how tight I still am with Zoe’s mom, how we all relate.” Chris Evans and Chris Hemsworth grew so close during their Avengers tenure. Chris Hemsworth said about his relationship with Evans “With Chris Evans, I have a real brotherly bond. We just spend the whole time screwing around and none if it is on topic.” Mark Ruffalo and Taika Waititi never shy away from showing their hilarious side on social media. They often share a true bromance and express it. Taika Waititi wrote a Twitter caption “Love you, bubba X”. Tom Holland and Jake Gyllenhaal leaned on each other when assimilating into the Marvel Cinematic Universe. Tom shared “I’ve been so lucky that I’ve had friends like Zendaya. Now a friend like jake Gyllenhaal, where I can really kind of confide in him”. John Stamos and Josh Peck both starred in the popular sitcom “Grandfathered”. John Stamos has struggled with alcohol and now he is in recovery. He admitted “I think I was meant to meet Josh Peck, he is a big inspiration in my recovery” Dwayne and Kevin have in recent years built something of a “bromance”. The pair have worked together in some movies such as Central Intelligence, Fast and Furious, and Jumanji. Dwayne Johnson admitted, “It’s a real friendship, it was one that I didn’t anticipate.” Jimmy Fallon and Justin Timberlake have been best friends for years. During a segment of The Tonight Show, Jimmy Fallon has a video call with Justin Timberlake to reminisce about their friendship. Jimmy said to Justin “Not knowing after all these years of friendships that you could do hand farts, I feel like I don’t even know you anymore.” John Mayer and Andy Cohen have a sweet friendship. Recently, Andy Cohen wrote a post on Instagram to celebrate John Mayer’s 43rd birthday. Cohen shared a photo of the two of them and captioned it “Happy birthday, Electric Cowboy!” Although Blake Shelton and Adam Levine used to quarrel with each other on The Voice, they are close friends in real life. Adam Levine said, “We’re always keeping tabs on each other, texting or however we can do”. Machine Gun Kelly and Pete Davidson have been friends for years. In an appearance on Jimmy Kimmel Live, Kelly said about their friendship. Davidson admitted that he was one of Kelly’s biggest fans, he often rapped along to the lyrics of Kelly’s songs. Hugh Jackman and Ryan Reynolds are great friends. Their social media posts reveal that they love to pull each other’s legs. On his birthday, Hugh Jackman poked fun at his friend with the caption on Ryan’s photo “I have the most amazing friends. Gorgeous flowers and heartfelt well-wishes. I am blessed” Bryan Cranston and Aaron Paul have shared how their friendship formed while working together on Breaking Bad. Aaron Paul said “I instantly fell in love with this man. He’s impossible not to love. He became one of my closest friends.” Robert Downey Jr. and Mark Ruffalo played friends in the “Avengers” film and they’re even closer in real life. During a Reddit AMA, Ruffalo wrote “We have a really good friendship. We’ve known each other since before Zodiac. And he’s kind of like an older brother that I wish I had”. Jamie Dornan and Andrew Garfield have an admirable friendship. In an interview with media outlet E, Jamie Dornan said “We’ve known each other 17 years and there were times when we weren’t working that much and it wasn’t happening for us.”