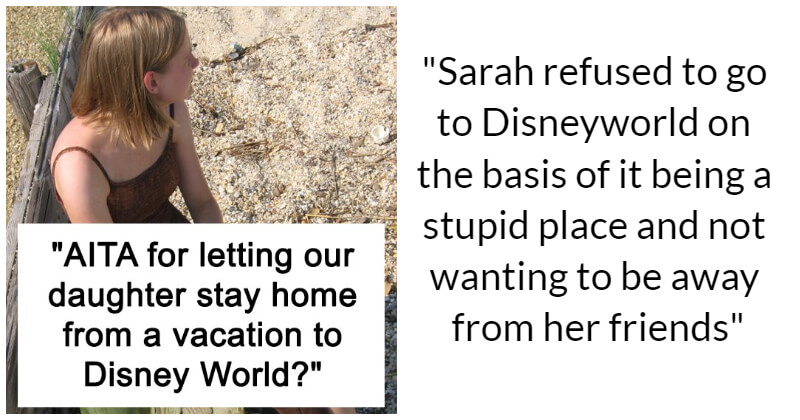 Teenagers are the hardest to understand. At the age when humans undergo a drastic change both mentally and physically, it’s normal to see teens act irrationally. We have been through this. For sure, but that doesn’t make understanding adolescent kids any easier. All those temper tantrums, heated arguments, and regular misinterpretations give parents a constant headache.

In the story below, a father shared that his daughter felt betrayed and angry as she was left at home while the family was going to Disney World. But hold on a minute, this father and his wife did that as the wish of their daughter. She said that it was the waste of time to go to Disney World. She would like to spend that time with her friends if she could. However, after the trip, when her younger sister showed her the pictures she took during the trip, she was incredibly angry. #3 He emphasized that they had tried to make her go with the family, but she refused anyway #4 Well, teens should learn how to live with their decisions. And this is a very good example The Ugliest And Most Questionable Designs Ever Made

18 Tattoos That Undoubtedly Made These People Regret Their Decisions

22 Of The Weirdest Book Titles You May Have Never Seen

Company Gets Roasted For The Email Explaining Why They Rejected A Candidate, Justice’s Served

“Never Come Back To My Restaurant”: Chef Returns $1,350 Bill Of Rich Patrons Who ‘Disrespected’ His Employee, Bans Them From Restaurant

If Your Children Are Too Quiet, They May Be In Trouble