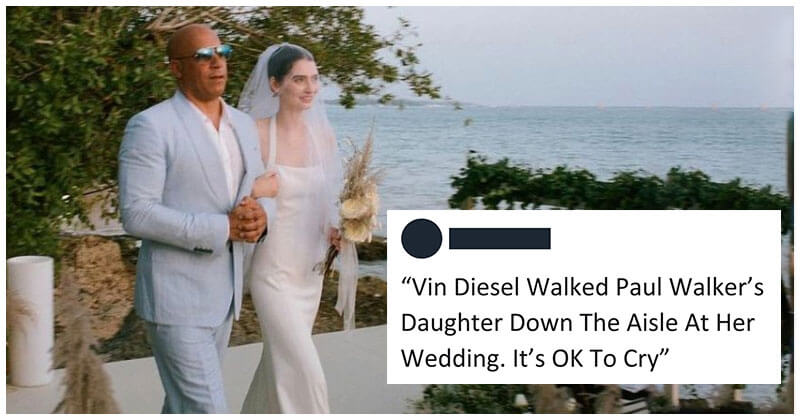 A wedding is a wonderful celebration of love and joy. It’s a moment when all of your friends and family get together to congratulate the newlyweds. The late Paul Walker’s daughter Meadow Rain Walker recently got married and one of her dad’s friends Vin Diesel walked her down the aisle at her wedding, which has made ‘Fast & Furious’ fans be in tears.

After a two-month engagement, Meadow Walker, the 22-year-old daughter of the late Paul Walker, walked down the aisle and said I do to Louis Thornton-Allan. Meadow lost her father Paul in 2013, which is one of the numerous reasons a bride does not walk down the aisle with her father. She shared tear-jerking pics on Instagram and stated that her godfather, Paul’s friend, and Fast & Furious co-star Vin Diesel, walked her down the aisle. “We’re married!!!!” she captioned a black and white photo of the wedding ceremony, which took place in the Dominican Republic. Traditionally, the father of the bride gets the privilege of walking their daughter down the aisle and giving them off to their soon-to-be spouse. However, her godfather, Paul’s friend, and Fast & Furious co-star Vin Diesel walked her down. Diesel and his god-daughter have a strong relationship. “She’s the first person on Father’s Day to wish me Happy Father’s Day,” Diesel told Extra in June. “To see her with my children is one of the most beautiful things. There are moments when I see her playing with [his 6-year-old daughter] Pauline, and it hits me so deep ’cause I can only imagine what my brother sees when he sees that.” “I feel very protective,” he added. During the filming of the movies, Walker became close friends with Vin Diesel. Walker wanted Diesel to be his daughter’s godfather since the two were best friends on and off work. Meadow and her fiancé, Louis Thornton Allen, just married. On the wedding day, Vin Diesel was there, walking Meadow down the aisle for his best buddy Paul Walker. Pictures of the ceremony shared on social media look like it was a small but private gathering of friends and family.

Many fans believed that the picture was the ‘best thing they saw on the internet’. ”Vin Diesel walking Paul Walker’s daughter, Meadow Walker down the aisle at her wedding ceremony is the best thing I saw today, so far,” one user wrote. Several users expressed their emotions and one user believed that ‘Paul was smiling so big from above’.