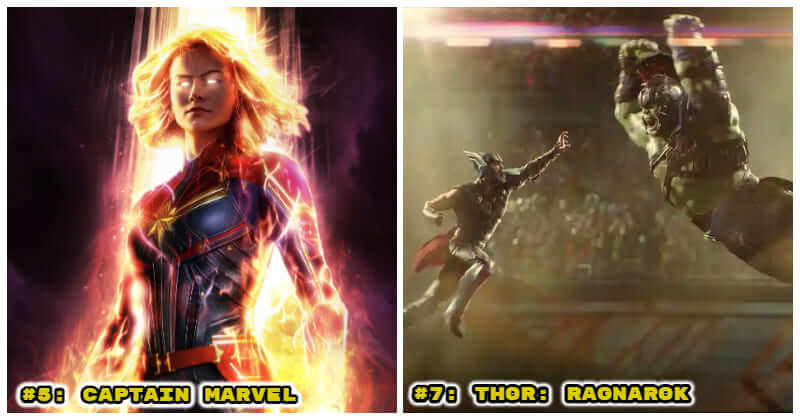 Thanks to neatly 30 movies so far, Marvel has affirmed their position in the cinematic industry. They have gained various awards and praise from not only the audience but also critics. And there are multiple reasons for that success: Characters, cinematic effects, and storylines blended vividly and impeccably. Each movie has a link in the storyline with others, which requires viewers to have a comprehensive understanding of the series, and there is no room for an omission.

But there are still several MCU standing out, deserving claps and implicit praise and leaving people with an indelible impression. These movies make people want to watch one more or even two more times due to their particularity. Below are the ten MCU movies that are indeed rewatchable. Iron Man, starring Robert Downey Jr. as Tony Stark, was the first film in the Marvel Cinematic Universe (MCU) to be released in 2008. For the first time, the movie brought the armored Avenger to life, surprising viewers with an upgraded perspective on the character that boosted his popularity among a new generation of fans. In 2016, Benedict Cumberbatch debuted as a talented surgeon turned master of the mystic arts in Doctor Strange, a film that explored a new side of the Marvel Cinematic Universe by introducing the mostly untouched world of magic. Captain America: The Winter Soldier, released in 2014, is the second installment of one of the MCU’s best and most rewatchable trilogies. In comparison to the other Captain America films, the film stands out for a number of factors that make it incredibly easy to watch. The afro-futuristic nation of Wakanda is a visual marvel that is both culturally inspired and technologically advanced, and the film not only contains spectacular action scenes and one of the MCU’s strongest villains, Killmonger. These components never fail to impress audiences on repeat viewings. When Captain Marvel initially debuted in theaters in 2019, audiences were still grieving from Avengers: Infinity War’s climactic ending, which left the MCU in ruins. As a result, the lighthearted adventure that introduced fans to Captain Marvel was an excellent palate cleanser that can easily be rewatched. In a universe-hopping adventure that brought the intergalactic Guardians together for the first time, Chris Pratt appeared as Star-Lord. The team’s synergy creates a relaxed and humorous rapport that makes it easy to watch again, especially when paired with 2017’s Guardians of the Galaxy, Vol. 2. The film not only contained some of the best humor in the character’s whole franchise, which worked brilliantly for protagonist Chris Hemsworth, but it also featured Hulk and an adaption of the fan-favorite Planet Hulk tale, which delivers something fresh to fans with each watch. Infinity War is chock-full of spectacular fight scenes and humorous character crossovers, making it a terrific rewatch. Despite more than a few fan-pleasing scenes, 2019’s Avengers: Endgame included even more fantastic fight scenes, yet it’s a bit heavier and not as easy to appreciate as Infinity War. The possibility to watch all three cinematic versions of Spider-Man fighting against a combined menace of multiversal adversaries as Doctor Strange brings his patented visual extravaganza to the field will undoubtedly make Spider-Man: No Way Home one of the MCU’s most rewatchable films. In 2012’s The Avengers, the wicked Loki led an extraterrestrial war to Earth in the Battle of New York, the MCU’s first phase presented the primary characters before they were unavoidably drawn together as Earth’s mightiest heroes.

The founding of the Avengers remains one of the MCU’s most memorable moments, and the final fight scene between the team and the different alien attacks continues to thrill and impress viewers, whether they’re watching for the first time or the hundredth.