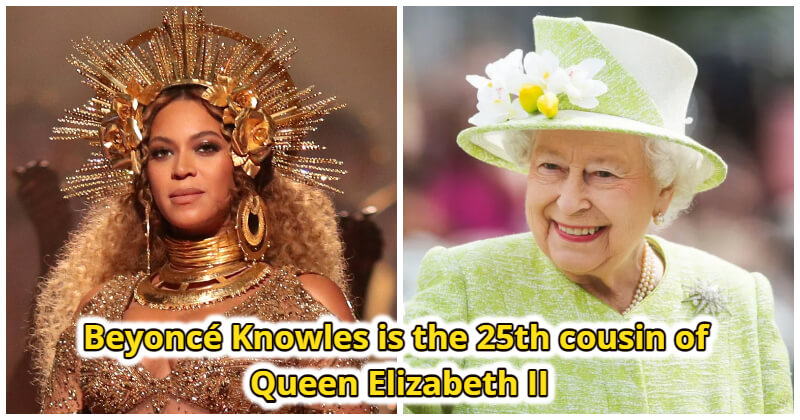 Everyone has ancestors. Let’s imagine that one day, after spending a bit of time examining your family tree, you find a surprise hidden in all those branches: you have a famous historical relative. After all, it’s just our imagination. But that makes us wonder what it’s like to be related to someone who altered the world. It must be incredibly weird to learn about your great-great-granddad in history class or watch a documentary about your great-great-grandmom. Have you ever been curious about the offspring of well-known (or notorious) figures? Thanks to the development of gene technology, some companies can now trace your ancestors back to many generations. Interestingly, they found that many celebrities are the descendants of renowned figures.

Their stories are so interesting that we want to share them with you. Let’s scroll down and find out more.

#1 The famous singer Beyoncé Knowles is the 25th cousin of Queen Elizabeth. They both share King Henry II as a common ancestor. #2 One of the most famous roles for Anna Chancellor is Caroline Bingley in a miniseries which was based on the novel “Pride and Prejudice”. But not everyone knows that Anna Chancellor’s great-aunt is Jane Austen, the author of this novel. #3 Benedict Cumberbatch is the 16th cousin of King Richard III, who was the last English king to have died during a battle, and there was a whole investigation into finding his remains. #5 Jake Gyllenhaal has antecedents back to King Edward III, who ruled the English from 1312 to 1377. This king is known as a rather conventional king, who pursued warfare but could also show great clemency. #6 Ozzy Osbourne is not just a descendant of the Neanderthal man, but also a relative of outlaw Jesse James. But his claim to royal fame is with the last Russian Tsar, Nicholas II, whose entire family was wiped out in the revolution. #8 Zooey and Emily Deschanel are related to King Louis IV of France, who ruled from 936 to 954. #9 Angelina Jolie has lineage from King Phillip II of France, who ruled from 1180 to 1223. He was known to have brought financial stability to his country. #10 Robert Pattinson is a descendant of Vlad the Impaler, who was known as the inspiration for the novel “Dracula”. This is a famous novel by Bram Stoker. #11 Actress Sigourney Weaver is a descendant of Henry I, who ruled from 1100 until he died in 1135. He may have died without a male heir, but his bloodlines spread far and wide. #12 Helena Bonham Carter’s paternal great-grandfather is Herbert Henry Asquith, who was Prime Minister of the UK from 1908 to 1916. She is also related to Jane Austen, and subsequently to Anna Chancellor. #13 Actor Cary Elwes is related to John Elwes, who was Charles Dickens’s inspiration behind the miserly character Ebenezer Scrooge in the classic “A Christmas Carol”. #14 Meghan Markle is considered to be cousins with William Shakespeare, the great playwright. #15 Anchor and host Anderson Cooper’s mom was the granddaughter of Cornelius Vanderbilt. He is known as the shipping and railroad magnate whose familial wealth was once more than the US treasury. So it turns out that Anderson is the great-grandson of this great historical figure.