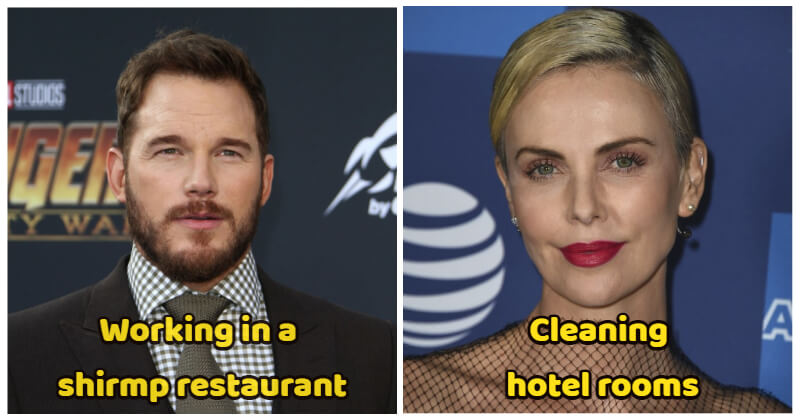 Hollywood is known as the film capital of the world and is the “promised land” for actors who are passionate about acting to fulfill their dreams. However, this road has continuous challenges and difficulties and requires actors to be persistent, determined, and hard-working. Some gave up, some went through the toughest times to achieve their dreams.

Seeing famous actors on the screen, we can’t stop wondering how challenging their roads to stardom could be. And, the more we understand their hardship, the more we admire their efforts. Below are 10 actors who shared considerable challenges when they first started out their careers in Hollywood. They’re all extraordinary! Christ Pratt is one of the biggest stars in Hollywood. But did you know that he rose from fretty humble beginnings to reach the top of the movie industry? He used to live in his van in Hawaii, technically homeless while working in a shrimp restaurant. Before that, he was driving the west coast of the United States selling coupons. Ryan Reynolds had to go through a hard time before being famous. He decided to move to LA after graduating from high school. He had not been in LA for one hour yet when getting his car got stolen. He shared: “My Jeep was stolen but then it was just rolled down a hill around the corner. They removed the doors, took the stereo and I was left with this shell that was my car.” It wasn’t a rosy childhood for Jim Carrey as his family struggled financially. His mother has suffered from depression and he has undiagnosed dyslexia which made him struggle at school. As a teenager, he worked as a security guard at his father’s workplace, a tire factory. Carrey was always fascinated by comedy, therefore he dropped out of school at the age of 16 to pursue his dream. Brad Pitt had done “odd jobs” before hitting Hollywood fame. He worked as a limousine driver, sometimes for strippers. In addition, he also reportedly worked as a “furniture mover”, which often involved “lugging refrigerators.” Among all his jobs, the oddest of them was his time working as a mascot for EL Pollo Loco. As noted, the actor’s humble upbringing provided him with an effective and strong work ethic. Matthew David McConaughey is a very well-known American actor and producer. when first arriving in Hollywood, he had no place to live. At that time, Don Philips sheltered him and helped him get his first auditions. At 16, Theron moved to Milan for two years to pursue a modeling career. At 18, she landed in New York City, where she continued to model and study ballet until injuring her knee. That prompted her to go after a career in acting rather than dancing.

The first years of her career were tough. She shared: “When I got off the plane, I asked the cab driver to take me to the cheapest hotel in Hollywood. Back then, the hotel could be rented by the hour. But I’d lived in worse model apartments.” Clint Eastwood dropped out of the LA City College and went on to train to be an actor. He told to his father that he was dropping out. He shared: “ I think it’s worth a try. But I always remember it could have gone the other way.” Emma Stone has become one of Hollywood’s brightest young stars in recent years, but part of her process was born out of challenges she encountered as a child with anxiety.
In an interview for her cover of “Rolling Stone”, the “La La Land” star shared that she suffered from panic attacks and crippling bouts of anxiety as a kid. Her parent realized that and got her a therapist. After winning the first season of “American Idol” in 2002, Kelly Clarkson put out a No.1 singer and got a record deal that was just the beginning. However, no one noticed that as a young adult, she was broken. She shared: “I had nothing to my name. Literally, I had to make that top to go to this audition. I had like no clothes, no thing.” Johnny Depp is one of the most famous stars in Hollywood but at the beginning of his career, he went through a hard time. He was a part of a band the first time he came to LA. The competition in the music industry was no less than it was in the film industry. He said: “There were so many bands, it was impossible to make any money. So we all got side jobs. We used to sell ads over the telephone. Telemarketing.”