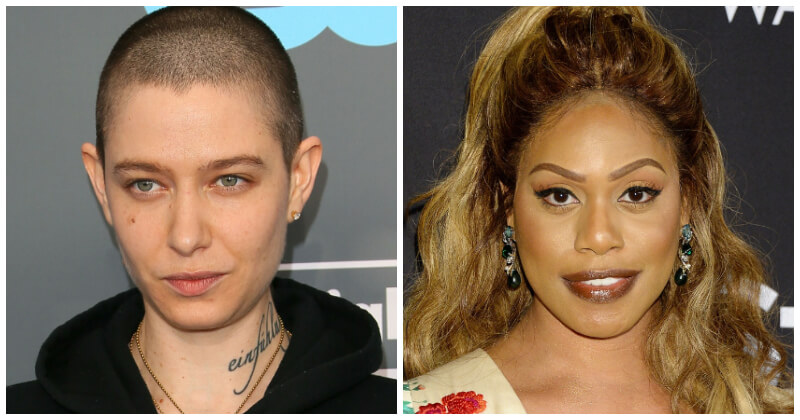 In recent years, there have been more and more transgender people in leading and supporting roles. You can find talented trans actors and actresses who are changing the movie industry. As cinema and television are becoming more inclusive and diverse, they are more open about their genders and transitioning journeys. Their talents and efforts are recognized, which encourages them to devote more. Live with their true identities and work with passion.

In this post, we’re glad to introduce 8 transgender actors and actresses who have made it big in Hollywood with their talents. Elliot Page is a prime example. He has received 74 award nominations for roles across Canadian and American film and television, winning 31 of them. Assigned female at birth, Elliot officially announced his transition in December of 2020. This immediately became a talking point on social media but doesn’t stop the brilliant actor from achieving more in his acting career. Laverne Cox rose to prominence with her role as Sophia Burset on the Netflix series, Orange Is the New Black. She is now one of the most successful transgender people in the entertainment industry. In 2014, Laverne became the first transgender person to be nominated for a Primetime Emmy Award. She was named among the “100 Most Influential People” by Time magazine the following year. The talented actress also appeared on the covers of Time, British Vogue, Cosmopolitan, and Essence magazines. Unlike many other trans celebs, Asia Kate Dillon is non-binary and prefers singular they/them pronouns. The actor is best known for their roles in the TV series, Orange Is the New Black (2013), and Billions (2016), John Wick: Chapter 3 — Parabellum (2019) and The Outside Story (2020). Elliot Page is a famous Canadian actor and producer. Born as Ellen Page and was assigned female at birth, Elliot decided to announce his transition in his Twitter post in December of 2020. He wrote: “Hi friends, I want to share with you that I am trans, my pronouns are he/they, and my name is Elliot. I feel lucky to be writing this. To be here. To have arrived at this place in my life,”. Josie Totah is best known for her role in the Disney Channel series, Jessie. In 2018, she came out as a trans woman and opened up about her transitioning journey in Time magazine. “This is not something that just happened. This is not a choice that I made. When I was 5, long before I understood what the word gender meant, I would always tell my mother that I wished I were a girl,” wrote Josie. Mj Rodriguez has a successful start in 2022. She won a Golden Globe for “best actress” for her work in Pose (2018). The actress has had a strong passion for acting since she was very young, and started out with theatrical performances and episodes in TV shows. She came out in 2016. At the age of 19, Jamie Clayton decided to move to New York City to pursue a makeup career. However, opportunities came, and the actress soon started appearing in TV series. She got recognition for her role in a Netflix series, Sense8 (2015), and Roswell, New Mexico (2019). Trace Lysette is famous for her portrayal of Shea in the TV series, Transparent, from 2014. The point is Trace played a non-transgender role after she came out as a transgender person. Such amazing work! Indya Moore started gaining recognition for her role in Pose and pursuing acting and modeling careers. She was admirably included in the “100 Most Influential People” list in 2019. She came out as transgender and non-binary and prefers they/them and she/her pronouns.