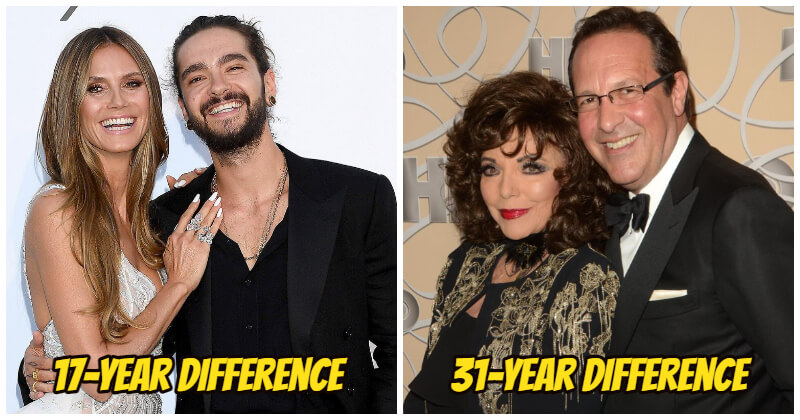 Women are said to mature faster than males, hence it’s normal for women to marry someone a few years older than them. But let us debunk this stereotype. Many dating experts said that you only find true love when you have compatibility with him/her and we always feel happy every moment with that person. As a result, age is only a number and it cannot prevent us from living happily with our partners.

In the world, a number of celebrity couples have proved this. They demonstrate that a relationship can be fruitful regardless of big age gaps. From new relationships to marriages that have lasted over a decade, all of these celebrities have partners who are several years younger than them.

We’ve made a list of 15 lovebird couples that have successfully shattered age-related stereotypes. Scroll on to read their love story. What do you think about a relationship with an older female partner? Tell us your opinions in the comment below! Julianne Moore and Barth Freundlich first met in 1996 on the set of “The Myth of Fingerprints.” It’s worth noting that the movie was directed by Freundlich, who was ten years Moore’s junior. The actress acknowledged that it was “a little unexpected,” but said that what people say about love blossoming is true and that things actually do get “way better” over time. Moore and Freundlich have two children: Caleb, a son, and Liv, a girl. When an NBA player marries an A-list actress, you have one of Hollywood’s most recognizable power couples. Dwyane Wade and Gabrielle Union are one of these couples. They met at a Super Bowl party in 2007, but it took them another two years to go public with their relationship.

Dwyane proposed to Gabrielle with a dazzling 8.5-carat cushion-cut diamond on December 12, 2013, with the support of his kids. The pair married on August 30, 2014, in Miami, after eight months of dating. Dwyane’s son Zaire, and daughter Zaya, is Gabrielle’s stepchildren, and the two of them have a two-year-old daughter Kaavia James. Shakira created a song about her soccer player spouse, Gerard Piqué, in which she mentions their age difference. The lyrics are included in the single “23.” “Hey, do you believe?/Do you believe in destiny?/’Cause I do as I did then/When you were only 23.” The pair, who met when he was 23, is ten years apart in age—exactly ten years apart since they share the same birthday. On February 2, she celebrated her 45th birthday, while he celebrated his 35th. Turner met Bach in Germany after she divorced Ike Turner. He was 30 at the time, and she was 46. Turner claimed she fell in love with the former music executive right away. Meeting Bach was “like crazy.” On July 4, 2013, Tina Turner married Erwin Bach. The couple had been dating for for three decades before tying the wedding. Heidi Klum has been married to Tom Kaulitz, 16 years her junior. Heidi Klum is a model and TV host. She and Tokio Hotel guitarist, Tom Kaulitz, first started dating in 2018. “He’s an amazing person. I couldn’t be happier,” Klum told USA Today. Hugh Jackman, 53, and Deborra Lee-Furness, 66, met on the set of Correlli in 1995 which served as Jackman’s first break out of drama school. After they married in 1996, they adopted two children together, Oscar and Ava. Despite their age gap, Jackman maintains that he is the adult: “I’m literally the adult in the relationship. She’s just like a little kid. I’m the [one saying], ‘Babe, this is not a legal parking spot.'” Susan Sarandon and Tim Robbins have never married despite being together for 23 years, and the former’s (failed) marriage may explain why. It appears that the star of “Thelma & Louise” was put off by the thought of marriage even before she married actor Chris Sarandon in 1967. She wouldn’t have married Sarandon if she had the option. She rapidly recognized that she wasn’t cut out for a typical marriage. — “I wasn’t interested in it,” she said of marriage — because “maybe it was a fear, you know, of losing your identity. When you become a couple [it’s] so easy to have happen,” she conceded. Tilda Swinton and Sandro Kopp have been dating since 2004, and their first encounter was beautiful. The White Queen met him, a centaur, on the set of The Chronicles of Narnia.
Tilda Swinton is famous for having two children, twins born to her and her ex-husband, John Byrne. They were born long before Sandro Kopp, but that hasn’t stopped Kopp from assisting in their upbringing. Allison Janney and Philip Joncas didn’t realise their love story but people think that they had first meet in 2012, when they collaborated on “The Way Way Back”. He worked as a production coordinator behind the scenes while she was an actor in the film, portraying Betty. And Joncas must have made a good impression on the set of The Way Way Back, for he and Janney were dating just a few years later. In June 2015, they made their first public appearance on the Minions red carpet. The 66-year-old star of “Keeping Up with the Kardashians” is dating a 41-year-old man. This means that Gamble is younger than Jenner’s daughter Kourtney Kardashian. Gamble and Jenner, on the other hand, have been dating since 2014. The pair met in a theater play in 2000 where Collins was appearing in a play for a company that Gibson controlled. And they married in 2002.

“The fact that I was older didn’t matter to us,” she says. “It was giddy, it was fantastic and Percy and I fell madly in love.
“I’ve finally found my true soulmate. And my husband forever.” Sam Taylor-Johnson announced her engagement to Aaron Taylor-Johnson, her 23-year-younger brother, in 2009. The two met on the set of Nowhere Boy, where Sam was the director, according to The Daily Mail. In a 2014 interview with Men’s Health, Aaron allegedly said of the age disparity, “She’s such a young, beautiful soul that you wouldn’t even know.” Lisa Bonet and Jason Momoa are 12 years apart in age. They met in 2004 and married in 2017. They have a 13-year-old daughter, Lola, and a 12-year-old son, Nakoa-Wolf. From her former relationship with artist Lenny Kravitz, Bonet has a 32-year-old daughter, actress Zo Kravitz. Fans were surprised when actor Priyanka Chopra started dating singer Nick Jonas, but after about three years together, they’re still going strong. There is a decade-long age gap between this glamorous couple but it can’t stop them from getting married in 2018. “I didn’t expect the proposal at that point… It was two months!” she told Elle UK. “I thought it would happen, but it was still a complete shock.”