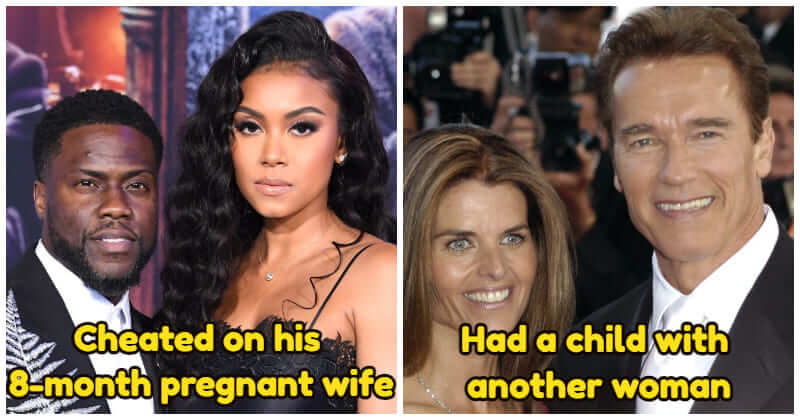 From the past until now, most celebrities have been attached to scandals for a variety of reasons. The majority of them are famous stars who have influence on entertainment and international film industries. All their affairs, especially love scandals attract the attention of the public and media.

Extramarital affairs were revealed, and these celebrities received waves of criticism from fans and media. Amid scandals, some chose to keep silent while some spoke up and admitted to having cheated on their partners. No matter what happened, these celeb’s love stories are in the past. Their partners overcome the pain and keep their happy on.

Below are some of the most shocking celebrity cheating. If you need a daily dose of drama, keep scrolling down!

1. Jessica Simpson admitted to having an “emotional affair” with Johnny Knoxville during her marriage to Nick Lachey. In her memoir, Open Book, Jessica admitted to having an emotional affair with Johnny while filming “The Dukes of Hazzard”. She said “I could share my deepest authentic thoughts with him and he didn’t roll his eyes at me”.

2. Kris Jenner had a feeling for another man, Ryan, that led to her and Robert Kardashian’s break-up. According to Mirror, Kris had an emotional affair with a man named “ Ryan” in 1980, two years before she decided to divorce Robert.

She said:” he made me feel young, sexy and alive. I actually wanted to throw up at the same time. Because it dawned on me that I had not felt that way with Robert”. Kris also confessed in her book: “ Robert was the greatest guy in the world”

3. Kevin Hart cheated on his wife when she was 8-month pregnant. Kevin Hart had another relationship with model Montia Sabbag, his wife was pregnant. An edited video of them posted on Instagram and other social media made her depressed at that time. She just didn’t know what to do.

4. Having a stepchild is the main reason resulting in the divorce of Arnold and Maria. According to the New York Post, Arnold and Maria ended their marriage because of their housekeeper, Baena. Arnold Schwarzegger and Joseph Baena had a child although Mildred Baena had claimed that her baby was her ex-husband.

5. Mario Lopez cheated on Ali Landry before their wedding day. Ali Landry suspected her husband of having a relationship with a young girl two weeks after their marriage. In an interview with Howard, Mario Lopez admitted that he never loved Ali. During Ali’s party, he got to know a young girl and had feelings for her.

6. Ryan and Quaid’s marriage ran to an end because of her affair. Meg Rya’s scandal is one of the biggest in Hollywood history. She cheated on Quaid – her husband and fell in love with Russell Crowe. She said: “ I felt the effect like I was the bad guy or whatever the story was. But I remember letting go of needing to correct anybody”. After the success of Twilight, Kristen Stewart and Robert Pattinson became a loving couple but eventually broke up due to Kristen’s fault. Kristen confessed to having feelings for Rupert.

8. Nick Young had an affair with another woman right in Iggy Azalea’s house Iggy sadly said: “ I broke up with Nick because I found out he brought another woman into our house while I was away and I caught them when watching security footage”.

Tiger faced the criticism: “ I cheated. I am deeply sorry. I understand people have questions. What I did was not acceptable”. When the photo of Katharine kissing Michael was released, she and Cokas broke up. She shared: “ I got married really young and then divorced. But I don’t have any regrets”.

10. Jude Law and Sienna Miller broke up because of Jude Law’s cheating. While filming a movie in New Orleans, Jude Law had a feeling for Daisy Wright. He admitted: “ There is no defense for my actions which I sincerely regret.” Branagh and Emma Thompson decided to end their marriage. Emma said: “ It’s under the bridge. You can’t hold on to anything like that. I haven’t got the energy for it”. David admitted to “People” that he cheated on Jaime Bergman after 9 years of their marriage. He fell in love with another woman but she did not love him back. “ Our marriage has been tainted with my infidelities. I just want to be open and honest” he said.

13. Dean McDermott cheated on Tori Spelling due to having adulterous relationship with a woman. Tori Spelling found out about her husband’s relationship with a woman named Emily. After that, he admitted it on the new podcast: “ Nothing is off-limits even extramarital affairs” After noticing that his husband had multiple relationships, Sandra Bullock resorted to making the biggest, toughest decision in her life so far. Getting divorce. She said: “ I have a level of defense that millions of mothers have that aren’t white. I let him process it.”

15. Huge Grant and Elizabeth broke up because of his mistake. In a conservation with the “People”, Hugh Grant told that the sex scandal made him embarrassed for many years and was the main reason that resulted in his divorce.

15 Celebrities Who Are Descendants of Renowned Historical Figures