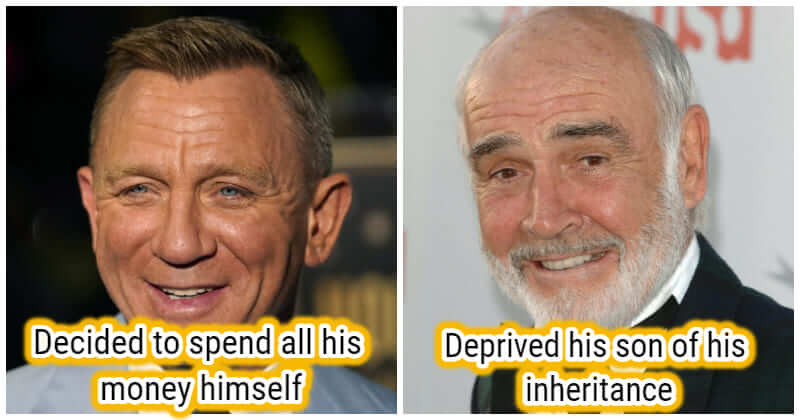 Sometimes, those who were born into wealthy and famous families may have a more difficult life than those who have ordinary parents. You create a will to make sure all your money, assets, and property end up in the right hands. The ultimate decision for parents is what they should leave to their kids. For most people, it’s an easy call to divide everything evenly among children. But these high-profile multi-millionaires and billionaires have pledged to leave little or none of their estates to their kids. Some of the world’s wealthiest people have already decided they’re not leaving their fortunes to their offspring. Many are donating their money to philanthropic causes, while others are just determined to make their kids learn the value of work and achieve success for themselves.

Here are 12 celebrities who don’t plan on leaving their millions to their kids. Marlon Brando had 11 children. However, his adopted daughter, Petra, whom he raised from the age of 14, and the son of his late daughter, Cheyenne, are excluded from his will. No one knows the true reason for his decision. Someone said that Petra’s mother sued Brando for money. Kirk devoted most of his time to helping those in need and gave almost all of his money to charity. He and his wife also have a foundation to help miserable people. Simon doesn’t plan on leaving any pennies for his children. He believes that time and the opportunity will teach them what they should know are the best things that a person can give to their kids. Cowell adds that he’d rather donate the money to charities that help kids and dogs. When Sean Connery passed away in 2020, people were shocked to know that his son got nothing from him. When the actor was alive, he said that he would deprive his son of his inheritance to teach him a lesson about making a living on his own. According to Steve Jobs’ demand, his wife, Laurene, doesn’t plan to leave an inheritance to her children. Instead, she invests millions in companies that can affect the world. This businesswoman launched a program that helps low-income students pay for college in 2015. Anderson Cooper won’t leave his money for his son. According to the journalist, a person should achieve everything themselves. His parents also just gave him the money to finish college, then he did everything by himself to be successful. The famous rapper 50 Cent and his son, Marquise, don’t have a good relationship. They regularly sort out their difficult relationship by posting their texts online. Their dispute is always the hot topic of the paparazzi. As a result, the rapper threatened publicly that his son would be excluded from his will. Hoffman’s fortune (which is about $35 million) was given to his girlfriend, Marianne O’Donnell. Although they had three children together, he decided not to leave a cent to them. The reason is that he didn’t want his heirs to feel like “trust fund” kids. The actor’s inheritance is estimated to be worth almost $160 million, most of which Craig got for playing James Bond. Daniel believes that a person needs to earn their living and thinks “inheritance” is quite distasteful. According to the actor, a person should spend all their money during their lifetime. That’s why he decides that his two daughters won’t get anything from his assets. David Cassidy showed that he loved his son more than his daughter, Katie Cassidy, because he didn’t raise her. When the actor passed away, he left all his inheritance to his son, and his daughter got nothing. During his career, Andrew Lloyd Webber has earned more than $1 billion with many other popular musicals. The famous composer said that he didn’t want his children to easily find a lot of money because then they wouldn’t have an incentive to work. That’s why his five children will never be given any of his enormous assets. Joan Crawford had four children who were all adopted. However, the Crawford fortune was all given to the younger twins. And her older children were left without a penny. This led to litigation, and as a result, the older adopted children got justice. Sadly, Heath Ledger made a will many years before his little daughter’s birth. That’s why all his property went to his three sisters and parents. However, his family gave it all to his 2-year-old daughter, Matilda.