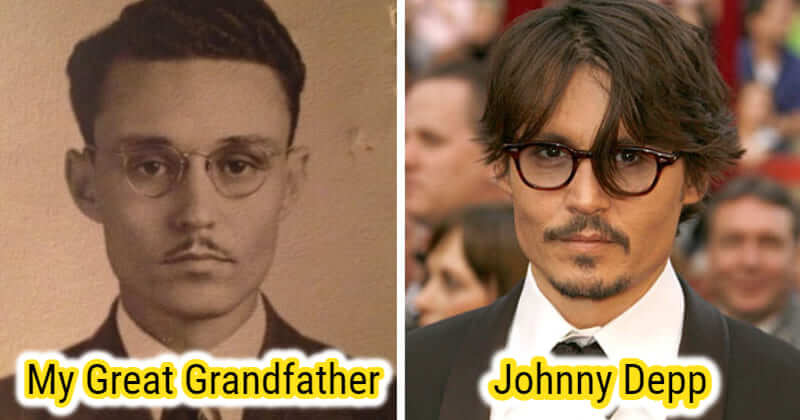 Have you ever heard or witnessed something that makes you wonder about the existence of time travel? This might be the uncanny resemblances of two people living in different decades (and centuries). Their ages, careers, social status, and even genders differ but these individuals look oddly like each other. Doppelganger. You might bump into your doppelganger in real life or somewhere on the Internet. Some teens shared that they found their doppelganger while scrolling through TikTok. Amazing!

This post, however, doesn’t introduce normal lookalikes. It focuses on celebrity doppelgangers. Specifically, 30 celebrities who resemble people who are dozens (hundreds) of years older than them. From Jennifer Lawrence distinguishing Egyptian Actress Zubaida Tharwat, John Travolta impersonating himself as a man from the 1860s, and Jay Z hanging out in Harlem in 1939 to Chuck Norris pretending to be Vincent van Gogh, this list certainly keeps your eyes wide-opened while scrolling down. If you are curious about how identical two people can be, keep reading and get your own answers. OMGoodness, They both wore glasses too! They are so much alike, even without the eye makeup, they’d still be twins! Omg, I thought Michael is on the left! #5. This Classy Man And Eddie Murphy Even the arch in the eyebrow! #7. A Man From The Painting Pope Gregory IX Approving The Vatical Decretals And Sylvester Stallone I see the similarity!

#9. Portrait Of Sebastián de Morra, Painted In 1645 And Peter Dinklage This is pretty crazy! Lots of similarities!

#11. My Friend’s Boyfriend Had A Great Great Grandmother Who Looked Exactly Like Steve Martin If He Were In A Victorian-Era Cross-Dressing Comedy Well, that explains a lot! I knew she exists somewhere. #15. This Is My Friend At Age 13. He Looked Exactly Like Natalie Portman He even has similarly located moles on his face