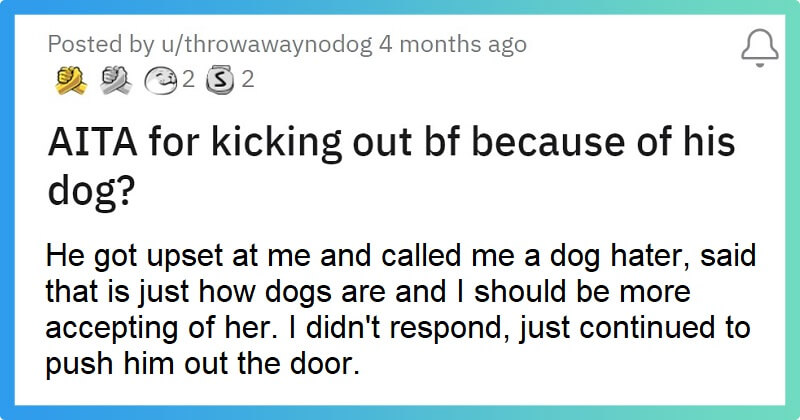 For dog lovers, you might not like the woman in this post as she is not a big fan of dogs. However, her story has nothing to do with the love for dogs, it mentions animal safety. The moral judges of Reddit are having a good day with it.

The woman who goes by u/throwawaynodog on Reddit shared her story and asked everyone for advice. She kicked out her boyfriend because he thought it was fine to bring his murderous dog around her small animals.

In the past, his dog killed her ex’s rabbits, so she doesn’t like it. She naturally doesn’t want this dog over around her small beloved pets. Her boyfriend knows about this issue but still brings his dog over without permission or warning.

She was pissed and told him he and his dog needed to leave immediately. He was not invited over anymore. He got upset at her and called her a dog hater.

After reading her post, Redditors sided with her. They said that she was definitely not an a-hole and that nothing good can come out of this relationship. Even dog lovers agreed that she was not wrong, and the boyfriend deserved to be kicked out. Scroll down to read their responses!

Cat Versus Dog Series: Dog Man Feels Offended Because His Furbaby Is Rejected Out Of A Friend’s Party