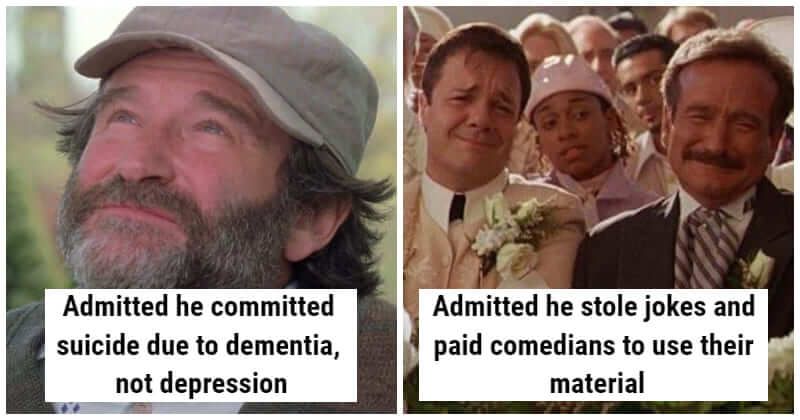 Robin Williams is no doubt one of the all-time most beloved comedians. Known for his rapid-fire jokes and animated body language in comedic roles, he can also give a heartfelt performance that stands the test of time as an actor in classics such as Good Will Hunting and Dead Poets Society.

Adored by fans and loved by friends and family, he was not without his flaws and personal battles. He was open about his struggles with addiction and depression, and the occasional borrowing of jokes. With that being said, here are a few things you may not have known about Robin Williams. Williams was one of the last people to see Belushi. They met up on March 4, 1982, at the Chateau Marmont, a Sunset Strip Hotel, at night, just one day before his death.

When Belushi became too inebriated, which he attributed to the quaaludes that he had taken, Williams decided it was time for him to leave. Before parting ways, he invited Belushi to visit him at his ranch in Topanga Canyon. But just a few hours later, Belushi suffered a fatal overdose in his sleep.

#2 Williams Committed Suicide Due To Dementia, Not Depression It’s well known that Williams struggled with depression. When he committed suicide in August 2014, many that depression was the cause.

However, Williams actually committed suicide because he had been suffering from a neurodegenerative disorder known as Lewy body dementia. According to his widow, Susan, the disease manifested just a year before Williams took his life, and rapidly declined his mental state. In many ways similar to Alzheimer’s, the symptoms are debilitating and include “fluctuations in mental status, hallucinations and impairment of motor function.” His friends recalled he was struggling to even memorize his dialogue.

It wasn’t until after his death that the autopsy revealed he had Lewy body dementia. Susan also wrote that he had lost 40% of his dopamine neurons.

If he had not taken his life, Williams would have only lived for three more years at most, according to predictions.

#3 While Steven Spielberg Was Filming ‘Schindler’s List,’ Williams Called Him Once A Week To Cheer Him Up In 2018, the director revealed that he and Williams had weekly phone calls to help him relax. Spielberg was suffering from stress due to filming Schindler’s List, a film about Jews in World War II, and listening to Williams giving him personal standup sets aided the production process tremendously.

That’s right. Your favorite comedian is a dirty joke stealer. Though accounts differ on how deliberate this was.

Williams himself admitted that this was due to him being too much “in the zone” while performing, accidentally dropping in bits he had seen from other comedians.

Using other people’s jokes for your set is bad, but he has admitted that he’d pay them back with cash whenever he could. Though by the time he was starring in The Birdcage with Williams, most people in the NY theatre scene knew he was gay, Lane still wasn’t comfortable with sharing that info with the whole world.

When they appeared on Oprah’s talk show, as Oprah tried to broach the subject, Lane recalls Robin Williams immediately changed the subject for Lane. Too bad, if he had been in the series, maybe it wouldn’t have been so dour in the later films.

#7 Disney Asked Robin Williams Not To Voice Batty In ‘Ferngully: The Last Rainforest’ Twenty-five years ago, a group of Australian animators finally got to make environmentally-focused kids flick that had been in gestation for a long time. That movie was Ferngully: The Last Rainforest, a flick now known for its lush setting and the inclusion of Robin Williams as a zany bat named Batty Koda. But Disney did not want him to do the role. According to Bill Kroyer, it all had to do with Aladdin and Ferngully both featuring Robin Williams.

The issue was that Ferngully: The Last Rainforest had signed on Robin Williams first, so there wasn’t much that Disney could do about Robin Williams doing two animated movies at once, except berate the popular actor.

#8 When Christopher Reeve Was In The Hospital, Williams Pranked Him By Pretending To Be His Proctologist In 1995, Williams was the first person to show up at his bedside When actor Christopher Reeve was paralyzed during a horse-riding accident. The two had been students at Juilliard in the 1970s and remained good friends since.

Williams snuck into the hospital and pretended to be Reeve’s proctologist, or for those who aren’t familiar with the term, a doctor who specializes in colon and rectal issues. Needless to say, Reeve laughed his ass off.

#9 Williams Didn’t Like How Disney Marketed ‘Aladdin,’ So They Gave Him A Million-Dollar Picasso To Make It Up To Him In the 1990s, Robin Williams was making about $8 million per film. However, the high-profile comedian and actor agreed to work for scale ($75,000) in Aladdin, on the condition that Disney not use him prominently in marketing.

But Disney did use Williams and his character in its advertising – and the film ultimately pulled in more than $500 million worldwide. Accounts differed. Williams gave several interviews badmouthing Disney and their deal. Disney claimed all their decisions were approved by Williams and his wife.

Disney eventually decided to settle things by extending an olive branch. An olive branch in the form of a Picasso painting worth 1 million dollars, that is. With this, Williams and Disney eventually patched things up, and he returned to voice Genie again in the sequel Aladdin and the King of Thieves.

In the interview above with Game News, Williams said he and his then-wife named their daughter, Zelda Rae Williams, after the titular Zelda in the Legend of Zelda series of video games.

Though people have speculated that the name was inspired by Zelda Fitzgerald, Robin says it was after the fictional videogame princess.

Bonus fact, Robin Williams is also a gamer. He recalls buying Legend of Zelda and playing it for hours and hours.