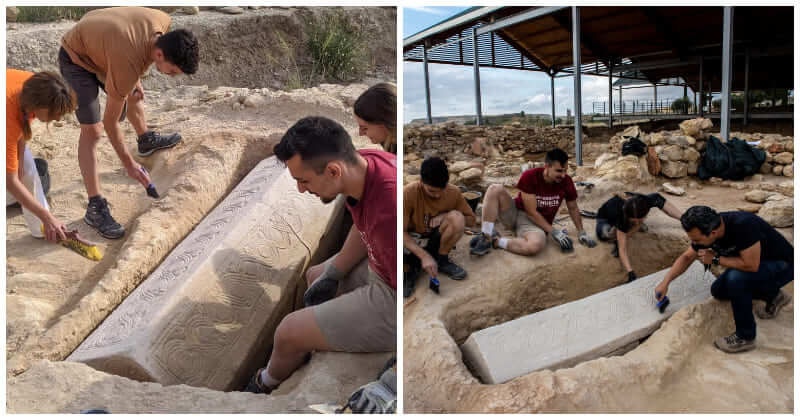 Recently, researchers from southeastern Spain have found a perfectly preserved Visigoth Sarcophagus at the location of what was previously a Roman villa. The stone coffin measures roughly 6 feet 7 inches long, with a swirling geometric ornament along its slanted lid interlaced with elaborate ivy leaves designs.

Scientists assume that the sarcophagus dates back to the 6th century AD, the time that the Iberian Peninsula was still part of the Visigoth kingdom, following the collapse of the Roman empire. It was found at Los Villaricos, a Roman villa built roughly during the 1st century, adjacent to the modern town of Mula, but forsaken by the 5th century. The sarcophagus was discovered by a research team led by Rafael González Fernández, a historian at the University of Murcia, during a summer archaeological campaign. “We weren’t expecting this spectacular discovery,” González said. In reality, the researchers first believed that they had discovered an ornate rectangular column, or pilaster.

However, after thorough cleaning, the team discovered a crismón, or Chi Rho, one of the initial forms of Christogram – a combination of letters forming the initials of Jesus Christ, often overlapping the Greek letters chi (X) and rho (P) – at the head of what turned out to be a sarcophagus. Despite the fact that the Visigoths were first pagan, most of them had converted to Christianity by the 6th century. The researchers discovered skeletal remnants inside the sarcophagus, indicating that they would need to complete more examinations to find out the identity of the deceased.

“This sarcophagus shows the archaeological power of [Los Villaricos] and confirms our commitment to the University of Murcia,” claimed Diego J. Boluda, the city councilor of Mula. “Undoubtedly, the piece will occupy a preferential place in the Museum of the City of Mula.” Los Villaricos was a prosperous Roman villa in its prime, having trace of an olive press, storage for olive oil and other agricultural practice. Its main reception room was restructured into a Christian basilica, while the adjoining patio became a necropolis.

González said that the 3-week dig concentrated on completing the excavation of the last 3 burials in the necropolis, and continuing with the excavation work of the complex situated north of the town.

Los Villaricos was a stopping point along the trade route from Carthage to Complutum, a settlement northeast of Madrid, during the Roman era. Later, it would have been strategic due to its proximity to the Visigoth city of Cehegín.