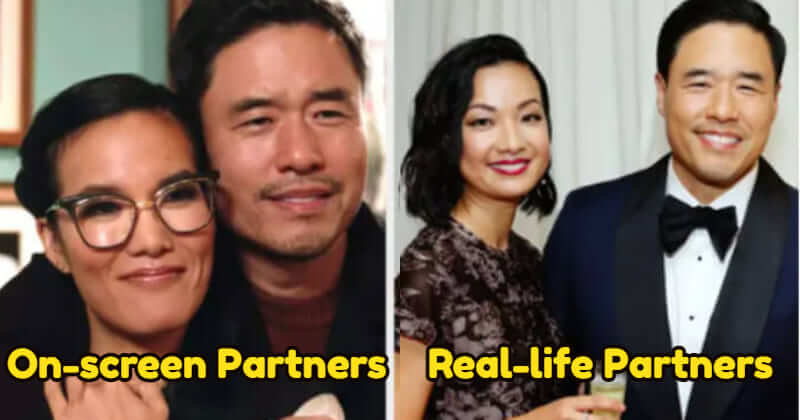 The romance scenes in movies can always grasp the eyes of the audience. They can’t keep their eyes off that love and watch it develop on the screen. They even wish the fictional relationship to continue to blossom behind the scene. Actually, some couples have gotten married or dated in real life, like Miley Cyrus and Liam Hemsworth, or Zendaya and Tom Holland. They are all amazing when they are together.

However, if your favorite on-screen couples do not fall in love with or marry their fictional partners, don’t be disappointed. We need to know that strong chemistry on screen is a requirement of their role. Because of their excellent performance and the strong chemistry between them and their on-screen partners, people somehow forget that fact. Moreover, many actors have tied the knot and have happy families in real life with someone else.

Are you curious about celebrities’ real partners? This post is for you. We have collected 15 actors’ fictional partners and their real-life partners. Scroll down to find out more! Randall Park is the actor who played Marcus. In “Always Be My Maybe”, he is Sasha’s love interest. Their on-screen couple has got a lot of fans. But not everyone knows that he has gotten married to fellow actor Jae Suh Park, whom he first met at a fundraiser and then at some auditions. Kate Hudson, who played Andie, Benjamin’s love interest in “How to Lose a Guy in 10 Days”, is married to Danny Fujikawa. Their first public appearance as a couple was in 2017, although they had known each other for a long time before that. Hudson had long been close with Fujikawa’s stepsisters, so she saw him regularly. He ultimately convinced her to accompany him on a hiking vacation, and they’ve been together ever since. Mark Ruffalo is a well-known actor who has many impressive characters. One of his most famous roles is Matt, Jenna’s love interest in “13 Going on 30”. In real life, Ruffalo has a 14-year-old happy family with Sunrise Coigney. They met before Ruffalo became famous. According to Mark, his wife believed in Ruffalo’s acting ability from the beginning.

Freida Pinto, who portrayed Jamal’s love interest, Latika, in “Slumdog Millionaire”, fell in love with a photographer named Cory Tran. The couple made their first public appearance together at the 2018 U.S. Open. In 2019, they announced their engagement. Pinto and Tran are expecting their first child. Amy Schumer is the actress who played Dr. Aaron’s love interest in “Trainwreck”. She met her husband, Fischer, on a trip to Martha’s Vineyard. They tied the knot only a few months later and had a child.

Steve Martin, who played Kate’s husband, Tom Baker, in “Cheaper by the Dozen”, is married to a writer. In the mid-2000s, he met his love, Anne Stringfield. She worked as a fact-checker for the New Yorker and was tasked with checking one of Martin’s comedic pieces. After a year of phone conversations, the pair finally met in real life. They settled down in 2007 and have a lovely daughter.

Billy Crysta made people impressed with the role of Harry in “When Harry Met Sally”. The chemistry between Harry and Sally was so strong that it made fans expect they would have a romantic relationship off-screen. But he has gotten married to his teenage sweetheart, Janice. They have been married for more than half a century. They met each other when they were just 18 and 19. Crystal said in an interview that the keys to his marriage are listening to each other and laughing a lot. Fans of the couple Brady and Mack in “Teen Beach Movie” may be upset to know that Ross Lynch is dating an actor named Jaz Sinclair. They met on the set of “Sabrina: The Chilling Adventures of Sabrina”, where their fictitious characters dated. Last year, they decided to make their relationship official and revealed it in a TikTok video. Amanda (Sarah Paulson played) and Jim in “Blue Jay” have strong chemistry, which helps them get a lot of viewers. But you may not know that Sarah Paulson has tied the knot with her long-term partner, Holland Taylor. This wonderful pair stated they met at a party a long time ago, but reunited in 2015 while working on a women’s rights campaign together. They began dating after Taylor entered Paulson’s Twitter DMs.

Annette Bening who portrayed Nic, Jules’ wife, in “The Kids Are All Right“ has settled down with actor Warren Beatty. Bening met Beatty for the first time in a restaurant after expressing interest in appearing in his picture, Bugsy. They had their first child during filming, and the couple married shortly after. Damon Wayans Jr. who played Nick, Susan’s love interest, in “Love, Guaranteed” chose to have a family with Samara Saraiva. They met each other during an unpleasant dinner, and then, at a party, she kneed him in the crotch. That move seems to have helped them stay together ever since.

The role of Gregory’s wife, Ingrid, was played by Carla Gugino in “Spy Kids”. Their on-screen love was adorable and memorable, which made fans expect they would have a romantic relationship in real life. It’s sad to say that she has gotten married to her longtime companion, Sebastian Gutierrez. She once stated in an interview that the pair do not feel compelled to marry since “There’s nothing holding us here other than our desire to be together.”

Kumail Nanjiani, who played himself in “The Big Sick”, is married to Emily V. Gordon. The duo met at a comedy concert where Nanjiani was performing, just as in the film. Gordon had to be induced into a coma because of complications with her Still’s Disease while they were dating. They married three months after her recuperation and eventually authored “The Big Sick” as a love letter to each other.

In “Crazy Rich Asians,” Henry Golding portrays Nick, Rachel’s love interest. He tied the knot with a fitness instructor called Liv Lo. On New Year’s Eve 2010, this charming pair met each other. After chatting, the couple began a long-distance relationship. They married in 2016, and Lo had their first child earlier this year. Quincy McCall (played by Omar Epps) in “Love & Basketball” had a strong love for Monica. But in real life, he settled down with a former R&B artist, Keisha. Epps has three children together with his wife of 16 years. One of them is the child Epps had in a previous relationship. The pair began dating in 1992, but separated for several years before reuniting. According to Epps, the secret to their marriage is understanding that “breaking up is off the table.”