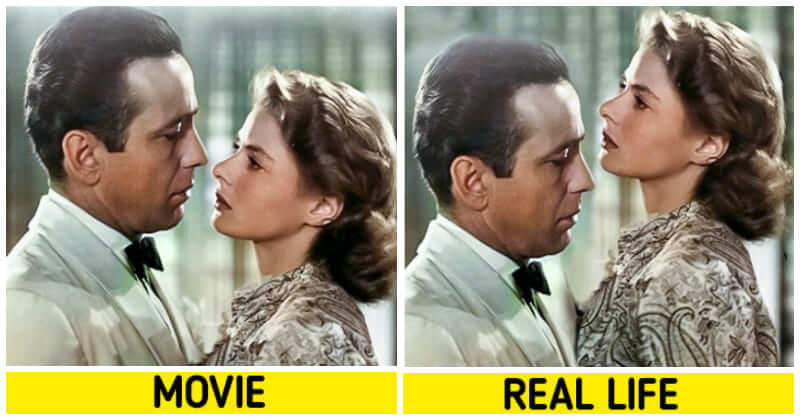 Is it possible to find a man who is ideal in every way? It seems like Hollywood would certainly have us believe so. Because most films made these days portray a male character who is attractive both in terms of looks and acting skills. And sometimes, the media also exaggerates the perfection of the actors, leaving fans shocked to discover that their favorite actor in real life is completely different from what they imagined. The height difference is what I mean.

We are sure you’ve wondered about the actual height of your favorite actor at least once. Are they as tall as they appear on the screen or is it just a good camera angle? Well, with just certain camera tricks and elevator shoes, characters can look significantly taller or shorter than they are. Robert Downey JR, for example, plays the character Iron man, who is 6 feet 1 inch. However, his actual height is 5 feet 7.5 inches, which is the average height of an American man. At any rate, height has nothing to do with the great acting of Hollywood stars. And they’ve proven it time and time again in many hit movies.

Here are 13 celebrities whose actual height differs significantly from our expectations. Scroll down for more details. Good camera work managed to hide the height difference between the main stars of Harry Potter. Daniel Radcliffe is shorter than Emma Watson and Rupert Grint in real life. However, the star of Harry Potter claims that it is not an issue for his profession. Tom Cruise and Dustin Hoffman, he remarked, are two successful actors who aren’t very tall. Hagrid is said to be double the size of a regular human in the Harry Potter books. Robbie Coltrane, on the other hand, is just 6’1′′ in real life. But this didn’t make it difficult for director Chris Columbus, as he stated that if he had the financial and technological resources at the time, he could have made Hagrid much taller. Another example when the use of a camera helped to conceal a significant height difference was in this scene. Josh Hutcherson is 5’5′′ and Jennifer Lawrence is 5’9′′ in real life. The actor is okay with his height and frequently jokes about it. David Duchovny is 5’11¾”. It’s reasonable that in order to get a good shot, Gillian Anderson needed to look higher than she was (5’3″). Gillian Anderson once shared that she had to jump onto something high to look taller. One time, she turned to the camera quickly and fell down because she had forgotten she was on a box. Tony Stark looks to be taller than Pepper Potts in Iron Man. In reality, Robert Downey Jr. is 5′ 8″ and Gwyneth Paltrow is 5′ 9″. As a result, the filmmakers needed to try really hard to make Robert Downey Jr. appear taller in the film. He was dressed in high heels, and there’s evidence that Guy Ritchie did the same on the set of Sherlock Holmes. If you watch Casablanca carefully, you’ll notice that Ingrid Bergman and Humphrey Bogart’s height gap is never consistent. The problem was that Bergman was taller than Bogart, and the director intended to hide that fact. To give the impression of the contrary, the director had Bogart sit on boxes and pillows, while Bergman had to slouch in some scenes. Some scenes in Fast & Furious look very strange. Diesel seems like a giant next to Johnson and it’s possibly a bad attempt at trying to make Vin look taller than he is. We were all fooled! When compared to his peers in The Green Mile, Michael Clarke Duncan appears to be a giant. He’s only 1 centimeter taller than David Morse. Duncan was 6’4″, Hanks was 6′, and Morse is 6’3½”. To create an optical illusion, the crew used very different tricks. Duncan’s bed, for example, was smaller than normal to make him appear even larger. The same could be said for all of the other pieces of furniture in his vicinity. Many characters in the Marvel Universe had to undergo significant transformations in terms of their appearances. Captain America, for example, was shown as being shorter and slimmer before his change. Scarlett Johansson also needed to be taller to match Evans. Her height is 5’3″ and Evans’ height is 6′. Christian Bale is three inches shorter than Tom Hardy, who plays Bane in The Dark Knight Rises. To obtain the same height, he had to wear shoes on a very high platform. Tom Hardy is 5’9″, and Bale is 6′. Amanda Seyfried (5’3″) and Justin Timberlake (6′ 112″) are another couple with a significant age gap. Even in fight scenes, the actress had to wear heels during her time on the set of In Tie. She even revealed how she could run fast with such shoes in one of the interviews. It turned out that the shoes are special with shorter heels. When it comes to celebrities who are short, tabloids nearly always cite Reese Witherspoon. Her height is just 5’1¾”. In Water For Elephants, filmmakers tried to mitigate the 11-inch height difference between Robert Pattinson and Reese Witherspoon.