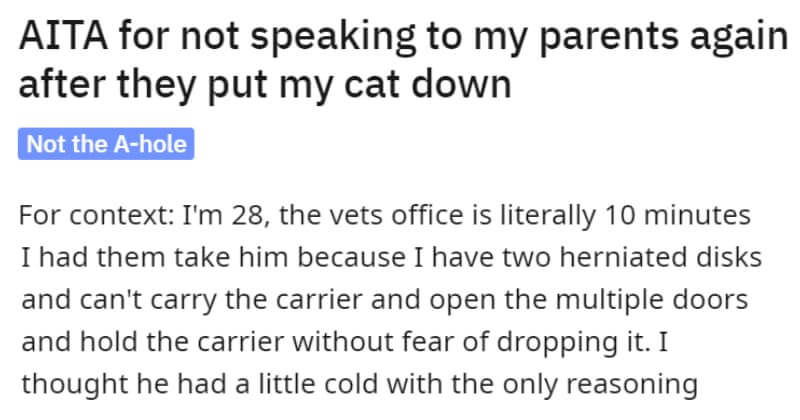 We all love our pets and don’t want to lose them forever. But, if for some reason, they can no longer stay with us, we have to accept the truth and say goodbye to these four-legged friends (although we don’t want to). Some owners really struggle to overcome the loss of their beloved pets, some admit they can not forget them until another friend comes and heals them inside.

But, what if you realize that your pets died without you there, and that they were intentionally put down by someone else? This is the situation that user @GxNihilum experienced. Sharing with Reddit, he told that his parents took his cat’s life without letting him know anything about it.

Why? Because they believed that it was a good idea to put the cat down without even letting him say last goodbyes, so he wouldn’t be sad or depressed. Exactly! They told him nothing, not even calling him to let him know. After OP learned the truth, he was angry and decided not to speak to his parents anymore. Readers, please give him some advice!

After the post was shared on Reddit, it quickly became the center of attention with 25.2K upvotes and more than 2K comments. Let’s see how people reacted to the story.

Many were even suspicious of the parents and the vet. Dog Shows Gratefulness To The Man Who Saved Him From Drowning In Canal, It’s So Sweet!

Kitten Miscalculates Jump Is Sure To Make Your Day

Smart Cat Knows ‘Give And Take’ Principle, Giving Affection To Owner And Taking His Chicken Away!