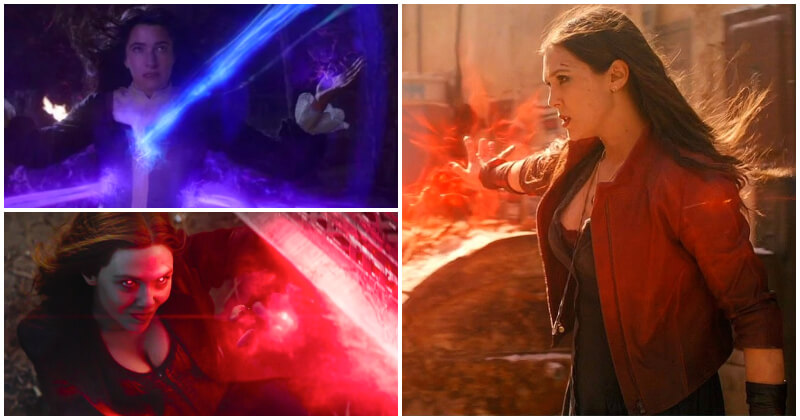 Starting as an antagonist, Scarlet Witch has made several mistakes like giving rise to the deaths or brainwashing of civilians (including Hulk). Still, she has gradually changed herself to be a protagonist and tried to do good things. Based on what we saw in Marvel movies, it is indisputable that Scarlet Witch is the most powerful superhero in the MCU so far.

There are few superheroes who can confront directly to Thanos as she did. Scarlet was even in the upper hand, specifically in the fight with Thanos in Avenger: Endgame. she did lift the God up and controlled his mind and his body with no resistance. Owning the power of mentality, There is no doubt this kind of power is both rare and irresistible. Moreover, this power becomes stronger and more unstoppable if she feels the loss and danger to her loved ones, which makes her become a real warrior. Below are four remarkable battles of hers so far in the MCU. During the battle between the Avengers in Captain America: Civil War, Scarlet Witch joined forces with those who refused to sign the Sokovia Accords. Wanda threw cars at Iron Man, giving Hawkeye and herself the opportunity to regroup with their comrades before ultimately being stopped by Vision.

How It Ends: Achieved Their Goal While several of the other heroes felt betrayed by each other, this battle only brought Vision and Scarlet Witch closer together. When Thanos tried to take it from him, Scarlet Witch defended T’Challa and fought the Mad Titan herself. She lifted debris from around the battlefield into the air and threw it at Thanos before directing her magic at him. Thanos blocked Scarlet Witch’s attacks with his blade and tried to kill her with it, but Wanda held onto it with one of her spells, taking control of the blade herself.

How It Ends: She Helped Her Comrades Defeat The Mad Titan Having few options, the Mad Titan ordered Corvus Glaive to use the Sanctuary II ship to fight back. As lasers shot down all around them, Maximoff and Thanos were separated. Captain Marvel took the Infinity Gauntlet from Spider-Man —who Black Panther had passed it to — and Scarlet Witch helped him fight Thanos’ army, specifically holding back his Leviathans. when Scarlet Witch knew her supposed friend Agatha was actually her enemy. Agatha hurt Wanda’s sons, prompting Scarlet Witch to attack her. Harkness released the children and Wanda demanded they go to their room. Once they were safely out of harm’s way, Wanda attempted to attack Agatha again, but Agatha absorbed her magic and shot it back at her. But Scarlet Witch regained her strength and defeated Agatha

How It Ends: She Turned Harkness Back Into The Friendly Neighbor Wanda won the fight by casting a spell on Agnes, altering her mind to think they were friendly neighbors again.

Hawkeye and Witch teamed up to fight the Ultron Sentries closest to them. As Clint shot arrows at them, Wanda used her magic to tear them apart. Once they defeated their opponents, Quicksilver arrived and grabbed his sister, bringing her to Ultron Sentries attacking a group of police officers and saving them.

How It Ends: Defeated Ultron But Felt Like She Lost At The Same Time She quickly eliminated a few of the Sentries got close. When Pietro died sacrificing himself to save Clint and a child, Wanda cried out — devastated at the loss of her twin brother. Her single outburst obliterated the Ultron Sentries closing in on the key in a single fatal attack. Wanda then tracked down Ultron and ripped out his core, telling him that with Pietro dead, she felt like she was dead as well.