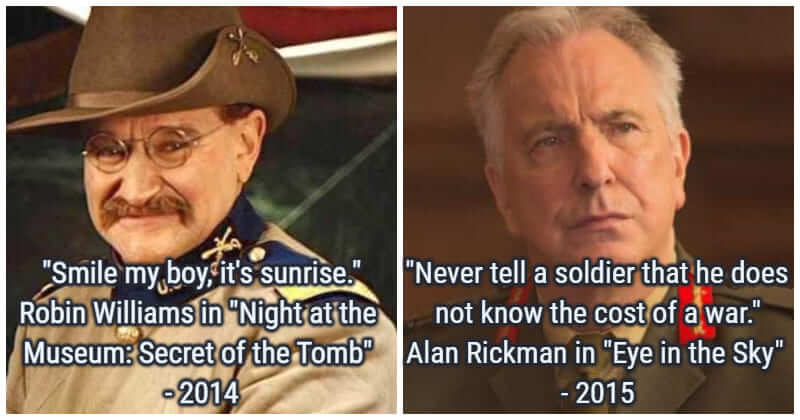 Here are the last lines of 10 Hollywood legends on the big screen. These lines may surprise you, make you laugh, or touch your heartstring. They are gone but not forgotten. We, normal people and movie fans appreciate what they dedicated throughout their careers. Their works will be admired by generations and their images will always be in our hearts.

#1 Robin Williams Reminded His Costar – And The Audience – To Smile The last appearance of Robin Williams was as Theodore Roosevelt in “the Night at the Museum 3” and voice Dennis in “Absolutely Anything”. But these films were released after his death. In “Absolutely Anything”, the last thing Williams, as Dennis, says is “Hey, nobody’s perfect!” It’s in response to his canine companion that he’s not a dog; he’s a man. In “Night at the Museum: Secret of the Tomb”, in the seconds before dawn, the former Rough Rider and US President meet with Larry Daley (Ben Stiller), opining on childrearing, saying farewell, and saying his final words: “Smile my boy, it’s sunrise.” Marlon Brando Jr. was considered as one of the 20 century’s most influential actors. Throughout his six-decade career, he won numerous awards, including 2 Academy Awards, 2 Golden Globe Awards, and 3 British Academy Film Awards.

Marlon Brando featured in “The Score” before his death in 2004. Brando portrayed Max, a mafia leader who persuades Nick Wells, played by Robert De Niro, to take one more item for him. Brando’s final scene was opposite De Niro. In an exchange with Nick, Max encourages his thieving companion to continue their crime, telling him, “I gotta have some slack.” Nick gives in, but as he walks away, Max cries out, “Nick. Hey Nick. Nicky!! Elizabeth Rosemond Taylor was one of the last stars to have come out of Hollywood’s old studio. She was famous all over the world for her beauty, particularly her violet eyes. For all of her life, she was a well-known public figure. She was designated the seventh-greatest female screen legend of Classic Hollywood cinema by the American Film Institute in 1999.

In the live-action movie “The Flintstones”, actress Elizabeth Taylor played Pearl Slaghoople, the mother of Wilma. Pearl Flintstone, as Fred Flintstone’s mother-in-law, constantly taunts him and bemoans her daughter’s choice of a spouse. Fred obtains a new job, they hold a party to celebrate his achievement. Pearl has made a 180-degree turn, cuddling up to Fred and asking if her big, handsome son-in-law has lost weight. Before the party ends, Pearl calls for a “Conga line!” Marilyn Monroe was an American actress, model, and singer. She was a prominent sex symbol in the 1950s and early 1960s, and she was symbolic of the sexual revolution of the time. And her last appearance on the big screen was along with The King of Hollywood”, William Clark Gable in “The Misfits” (1961). William Clark Gable appeared in more than 60 films in a variety of genres during a 37-year career.

Marilyn Monroe was cast opposite Clark Gable and Montgomery Cliff in the role of a divorced woman. Gable died before the movie was out.

Monroe and Gable (as Roslyn Taber and Gay Langland, respectively) drive out together in the film’s last scene, with Monroe wondering, “How do you find your way back in the dark?”
Gable: “Just head for that big star straight on. The highway’s under it. It’ll take us right home.”

Their interaction was the last time either of them appeared on the big screen. James Byron Dean was famous for his role as Jim Stark in the movie “Rebel Without a Cause” (1955) but the roles that defined his stardom were loner Cal Trask in “East of Eden” (1955) and surly ranch hand “Jett Rink in Giant” (1956). After his death, Dean won 2 posthumous Academy Award nominations for Best Actor. Newman played John Rooney, a mafia leader who hires Michael Sullivan, who is played by Tom Hanks. In the film, his last words are directed at Hanks: “I’m glad it’s you.”

#7 John Candy Had Two Movies Released After His Death John Candy’s last movie was “Canadian Bacon”, a satire about tension in the Canadian-US and Candy played Sheriff Bud B. Boomer. His last words in this film were, “Look, honey, home,” followed by laughs as he and on-screen wife Rhea Perlman return to the US. The last lines from “Wagons East”, a buddy comedy about leaving the frontier to go east, are those of wagon master James Harlow as he calls out, “Wagons, ho!” Before his death in 2016, Alan Rickman starred in the film “Eye in the Sky,” as Lt. Gen. Frank Benson – the Deputy Chief of the British Defense Staff. Rickman reveals his opinion before the credits roll, reminding a politician to “never tell a soldier that he does not know the cost of a war.” He heads home, thanking a fellow soldier for handing him a package on his way out.

John Wayne’s final film, “The Shootist,” was a suitable send-off for the actor and the film was released three years before Wayne’s death. J.B. Books, Wayne’s character, greets the bartender before taking part in a saloon shoot-out, Wayne says “Thank you, sir”. During the gunfight that ensues, he says nothing but desperate stares and a gasp before dying. Audrey Hepburn’s role in “Always” was Hap, the being Pete Sandich (played by Richard Dreyfuss) meets after his plane crashes. In the film, Audrey Hepburn’s remarks come to a close with the lines: “You’ve had your life, for better or for worse. Anything you do for yourself now is a waste of spirit. There’s your boy.” Audrey Hepburn passed away in 1993.