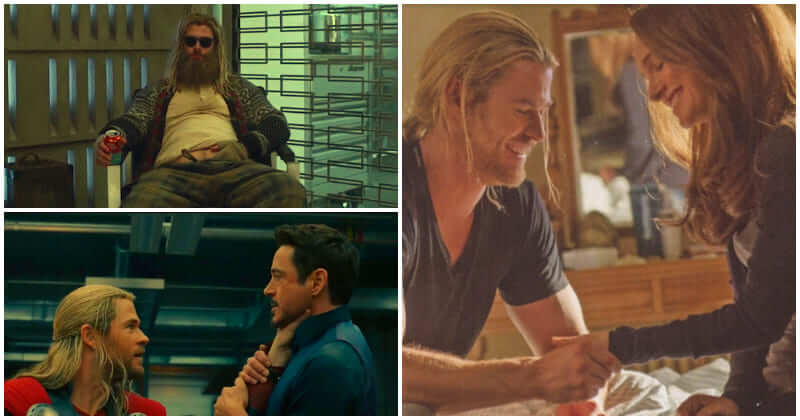 Every superhero in the MCU has different power and characteristics. It seems like they are all impeccable, but as the old saying goes: “No one is perfect”, and Thor is not an exception.

He appears as the king of Asgard with brightness and graciousness, drawing attention and respect from others. It is understandable that not only does he have royal blood, but he also has a fierce power that can destroy anything that hinders this path. By contrast, he still has flaws and weaknesses that sometimes make him like a fool, followed by terrible things that happened to him and his loved ones, such as the time when he was exiled to the earth, he was tech-illiterate and unaware of the Earth customs. To be more specific, below are the ten worst things about Thor so far in the MCU. Thor reacted with violence when the Frost Giants mocked him, and Thor refused to acknowledge his mistakes when his father Odin confronted him about it soon after. Thor kept up his pride on Earth until he finally started to learn some humility. Amusingly, Thor tried to buy a horse at a pet shop, only to realize that he was in the wrong place for a mount. He also smashed a coffee cup when demanding another drink, an Asgardian custom that didn’t translate well to Earth life. He also tends to miss pop culture references, such as in 2012’s The Avengers. Thor doesn’t know how cars and cell phones work, and at one point, the magical Doctor Strange brought up the topic of e-mails. Thor claimed he knew how to handle e-mails, but he was unaware that computers were involved, so he was probably just lying to avoid sounding ignorant. Granted, 2013’s Thor: The Dark World is only bad by MCU standards, and is far removed from cinema’s worst movies ever. Still, there is relatively little to like about Thor’s second solo movie in Phase 2, especially since its events only have limited bearing on the MCU’s overall plot.

5. Mocking Loki For Being Adopted In the scene when Black Widow reminded everyone that Thor’s brother, Loki, had already killed 80 people in two days. Thor then tried to distance himself from Loki by pointing out “He is adopted,” which is technically true, but a vicious observation to make all the same. There was no need for Thor to speak ill of foster family members. Thor had become over-reliant on Mjolnir, which held him back somewhat. He needed Odin’s spirit to visit him and remind him that Thor is the god of thunder, not the god of hammers, and Thor needed to get more creative with his fighting style. At last, Thor embraced his electric powers.

7. Thor Didn’t Go For The Head Thor wanted Thanos dead so he could avenge Loki, and sure enough, Thor dealt a serious blow to Thanos’ chest. However, this was too little, too late to prevent the Snap, and Thanos famously stated: “You should have gone for the head.” How right he was.

8. Thor Clashed With The Avengers About Loki Earlier in the MCU, Thor was conflicted when it came to his adopted brother Loki. He didn’t like the idea of Iron Man taking this matter into his own hands. Thor was unnecessarily belligerent during this sequence, and that prompted Iron Man to attack him. Things got messy until Captain America intervened, and even then, Thor tried to attack Cap. Thor needs better negotiation skills than these. In 2015’s The Avengers: Age of Ultron, Thor challenged his fellow superheroes to lift Mjolnir, but he was really just teasing them with it and said how they were not worthy.

10. Thor Is Often Too Late To Help He once tried to visit Odin on Earth, only to be far too late, since Odin’s treatment home had since been torn down. Thor was also a bit late joining his fellow Avengers to protect NYC, and most of all, he was far too late to defeat Thanos in Wakanda and prevent the mad titan from using all six Stones at once. If only Thor had been there five minutes earlier.