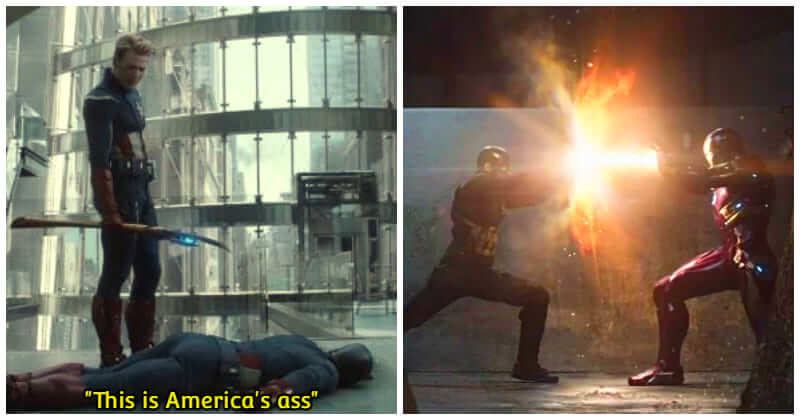 There are some doubts about the power of Captain America as some said he is not as good as other Avengers like Thor, or Iron Man. But it is indisputable that in the absence of him, The Avengers would have struggled with the mission of saving the world and the universe. He is a  person of integrity, exceeding rigidity sometimes, but he always sacrifices himself to help his comrades and achieve greater missions.

Throughout the movies, he has gotten involved in countless battles on the earth or the outer. From fighting HYDRA so as to save the world from terrorists to battling Thanos to a greater mission – saving the world, which are all amazing and pivotal battles. But there are ten outstanding battles of Captain we want to show you, scroll down and take a look.

1. He Fought His Past Self In Endgame, he encountered his past self. His past self believed that he was Loki, altering his appearance to manipulate those he came across. Steve tried to explain that he wasn’t looking for a fight but, knowing that he wouldn’t believe himself, he prepared to fight back. The two Captain Americas ran towards each other and smacked their shields together. The past version of Captain America kicked his future self down.

How It Ends: The Future One Won They tried to get on top of one another while the future version of Captain America tried to grab the Scepter, as it had fallen out of the case he put it in. The past Captain America let his future self go when future Captain America told him that Bucky is alive. The future Steve saw this as an opportunity to hit him one last time before grabbing the Scepter and knocking him out with it.

2. He Fought His Teammates How It Ends: He Escaped After Beating Spider-Man When Steve ran away and tried to grab the dropped Shield, Peter Parker pulled him back with his webs. However, Steve was able to fling Peter away by taking control of the webs. As Spider-Man tried to take away Captain America’s shield again, Steve smacked him with it. Spider-Man made one last attempt to attack him, but Steve knocked him away and dropped a loading truck on him. Steve and Bucky then regrouped and escaped the battle on a jet.

3. He Fought Winter Soldier And HYDRA In the fight against HYDRA, Winter Soldier shot at his old friend but Captain America blocked all of the bullets with his shield, which Bucky took from him in a fistfight.

How It Ends: Bucky Were Taken Away Once Steve got his shield back, he used it to fight Winter Soldier, removing his mask. Shocked to see his old friend, Captain America was nearly shot by him, but Falcon and Black Widow came to his rescue. Before the fight could continue, HYDRA surrounded and arrested the heroes, letting Bucky get away.

4. The Battle In Wakanda When the Outriders got through Wakanda’s barrier, Captain America ran towards them with his comrades. He started punching them and hitting them with his shield. As more came by, they easily managed to overpower him. Thor, luckily, came to his rescue and the two fought beside each other.

How It Ends: Thanos Defeated The Heroes After beating Corvus Glaive, Thanos came to Earth and Captain America tried to fight him, only to be knocked onto the ground. As his comrades fought back, Captain America stood up and was able to punch Thanos in the face. Unfortunately, Thanos hit him much harder, sending him back into the dirt.

After the Avengers saved the people who faded away, a past version of Thanos learned what they were up to and fought them, hoping to take the Infinity Stones from them. This time, he wanted to make a universe where its inhabitants wouldn’t try to stop his goal. Thor and Iron Man teamed up with Captain America to attack Thanos.

How It Ends: The Avengers Won As You Know Most of the heroes fought the Outriders and the Black Order. Meanwhile, Captain America, Thor, and Captain Marvel assisted Iron Man in an attempt to stop Thanos from taking the Infinity Gauntlet. While he was able to put it on, he was surprised to learn that Tony had actually removed the Infinity Stones from it and used them to defeat Thanos, turning him to dust. With Captain America’s help, the entire universe was saved.