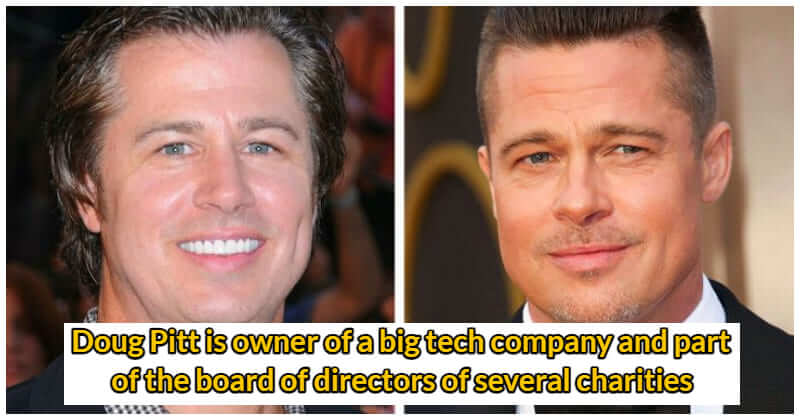 Some people enjoy the spotlight, standing in front of the cameras but some really don’t. They prefer working in a field that is not always at the center of public attention. This is actually what happens with the siblings of 11 celebrities in this article. While their brothers and sisters pursue art and become global stars, they follow their own paths. But they were not left behind. Their siblings make it big in the entertainment industry and they also earn great success in their careers.

Do you know that Doug Pitt, Brad Pitt’s brother is a businessman and philanthropist? His company, Pitt Development Group, specializes in medical offices and has properties in different US cities. Or Jennifer Lopez’s sister, Lynda Lopez is a well-known New York journalist who won an Emmy in 2001 for her journalistic work? These siblings of our favorite celebrities prove that they are also great at what they do behind the spotlight. We are all good at something, just make the right career choice and live with it. Brad Pitt’s brother, Doug Pitt, (his real name is Jack Mitchell Pitt) is a businessman and philanthropist. His company, Pitt Development Group, specializes in medical offices and has properties in different US cities.

Doug Pitt is part of the board of directors of Make a Wish, the Red Cross, Care to Learn (he found in 2008), and some other charities. He also participated in several projects in Africa and was named Goodwill Ambassador in the Republic of Tanzania for his work. Do you know that Antonia Kidman, Nicole Kidman’s sister used to be an actress? But she later focused on TV presenting and worked on an Australian TV series Antonia also publishes 2 books. Simon Cowell is globally known as a feared judge of programs like The X Factor and American Idol. His brother, Nicholas Cowell also had a successful career as a real estate agent. With over 50 years in the field, Nicholas Cowell is now the director of the Cowell Group, one of the most important property companies in the United Kingdom. Gemma Styles is famous for her own successful career, aside from the sister of her famous brother, Harry Styles. Gemma is an influencer with 7 million followers on Instagram, and she is currently managing a podcast and a website where she talks about mental health, feminism, and sustainability to raise awareness. She also owns a brand of sunglasses and has writing published in recognized media, such as Teen Vogue and Glamour. Jennifer Lopez and her sister, Lynda Lopez are both talented. Lynda is a well-known New York journalist who won an Emmy in 2001 for her journalistic work. She is also the co-founder of Nuyorican Productions specializing in audiovisual production. Savannah Miller is a successful designer and is currently owning a brand of wedding dresses that bears her own name. She and her famous sister, Sienna Miller, launched the Twenty8Twelve clothing brand in 2007. But they abandoned it in 2012. The Hayek siblings both have a passion for art. Salma Hayek is globally known as an actor and her younger brother, Sami Hayek, is a renowned furniture designer in Los Angeles. He also has his own studio. Kayleen McAdams not only has a celebrity sister, Rachel McAdams, but she also works with celebrities. She is currently one of the most recognized makeup artists in Hollywood. Kayleen works with well-known fashion magazines, such as Vogue, Vanity Fair, and InStyle. She also stands behind impressive red-carpet dresses of big stars like Sofia Vergara, Sadie Sink, and Kristen Stewart. In the Hadid family, a passion for modeling is found in all three siblings. Bella Hadid and Gigi Hadid have made it big with their modeling career and their younger brother, Anwar Hadid, is following their path. Anwar started out in 2016 alongside brands Moschino and Tommy Hilfiger and also worked for Hugo Boss.

Source: @Aliens of the Deep / Buena Vista Pictures and co-producers

Michael Cameron is an aerospace engineer. He supported his brother, James Cameron when he was shooting “Titanic”. The man built remote-controlled cameras that would withstand the high pressure. Michael also worked as a stunt diver of the underwater explorer in the 1994 documentary, “Aliens of the Deep”. Gesine Bullock proves she is right when following her passion for cooking. Sandra Bullock’s younger sister is a renowned pastry chef, a judge on food shows, and has her own show on the Discovery Plus channel. There is one thing that is more surprising. Gesine is a lawyer and vice president of Fortis Films, Sandra’s audiovisual production company.