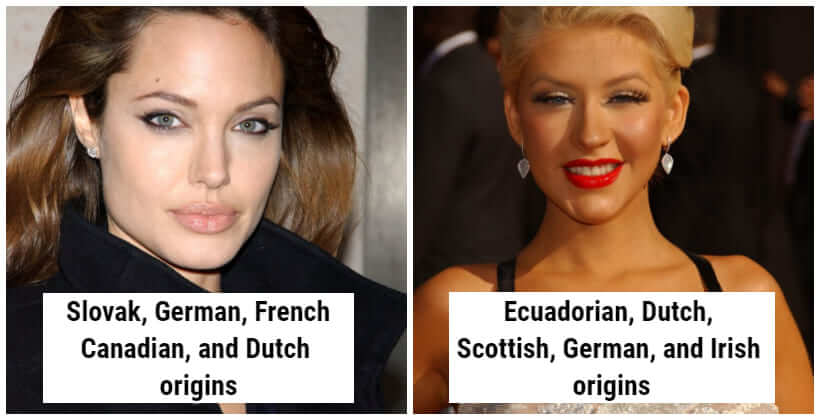 We’ve compilated a list of the 21 mixed race celebrities below! Today, the world is becoming a more colorful and diversified place following the increase in the number of multiethnic families. And in the entertainment industry, there are more and more biracial or even multiracial celebs who have gone on to make a name for themselves.

Who is the most well-known mixed-race celebrity now? Actress Angelina Jolie tops our list. This Hollywood star was born in 1975, in Los Angeles California. Her father is the famous actor, Jon Voight, and her mother, the late Marcheline Bertrand, was an actress and producer. Bertrand’s mother was of German and Dutch ancestry, while her father was of French Canadian ancestry. Angelina Jolie’s beauty is from a complex multi-ethnic mix for centuries.

In our list, there are other famous actors/ actresses who are multiracial including Nicki Minaj, Keanu Reeves, and Dwayne Johnson (The Rock) … These celebrities have all known as entertainment jewels due to their excellent looks and talent. Click through for more details! Do you know other multiracial celebs? Tells us in the comment below. Angelina’s father is of Slovak and German ancestry, while her mother is of French Canadian and Dutch ancestry. On his father’s side, The Rock is Black Nova Scotian, and on his mother’s side, he is Samoan. Her father is of Ecuadorian descent, while her mother is of Dutch, Scottish, German, and Irish descent. Niki has a mix of African, Indian, and Japanese ancestors. Keanu’s name means “cool breeze over the mountains”. According to his ancestors, he is Hawaiian, English, and Chinese. This is complicated. He is German, English, African-American, and Jamaican on his father’s side; and Swedish, Russian, Syrian, Dutch, and French on his mother’s side. Quite a mix. The famous actress has Chinese and Vietnamese roots on her mom’s side as well as German and English roots on her dad’s side. Shays’ father is of Irish and Scottish ancestry, and her mother is Filipino. Maya is moth famous for her role in The Good Place. She is African-American on her mom’s side and Jewish on her dad’s side. She is of indigenous, Swiss, Japanese, African, West Indian, and Portuguese descent. Mariah Carey has a mix of African-American, Venezuelan, and Irish genes. Vin has never met his real father, but he knows that his father is descended from German and English ancestors. Interestingly, he identifies as “a person of color” because his adoptive father is African-American. Jesse Williams is African-American and Swedish. She was born in Colombia, however, her father is Lebanese and her mother is Colombian. In Arabic, her name means “full of sunshine.” Jessica’s mother is Hungarian, while her father is African-American. The Dutchess of Sussex’s star is part African-American, Dutch, and Irish. Ne-Yo is of Chinese and African-American descent. She is descended from English, German, and Cuban ancestors. The famous model has Jamaican and Afro-Chinese origins.