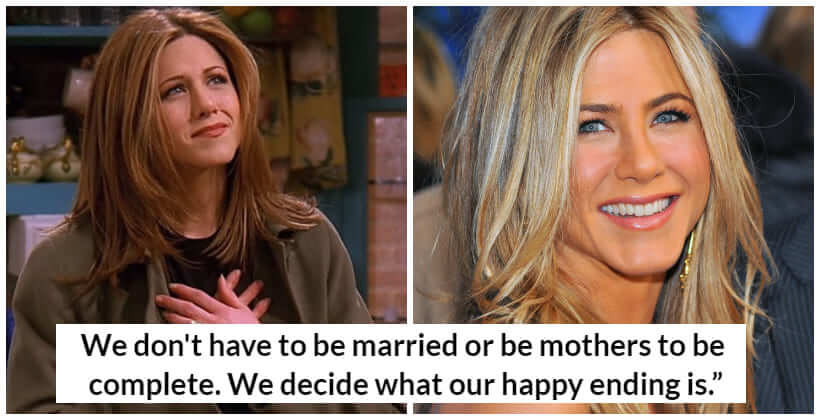 According to conventional belief, being a mother is the obvious and typical next step for women when they get married. Women who choose to deviate from this tendency are met with suspicion.

No one is safe from this judgment, not even A-list celebrities like Jennifer Aniston. The 47-year-old actress and producer, who came to fame as Rachel on the sitcom “Friends” in the 1990s, has now spent the better half of her life in the harsh Hollywood spotlight. She has become something of a spokeswoman for childless women. The tabloids have spent many years and considerable resources prying into her personal life, specifically her lack of children. But Aniston responded to the all-untrue rumor about her being pregnant with a powerful rebuttal to the idea that any woman is somehow incomplete without a child. Jennifer Aniston’s story inspires many women that “We don’t have to be married or be mothers to be complete. We decide what our happy ending is”. Born on February 11, 1969, Jennifer grew up in the LA town of Sherman Oaks. Her mother and father were also performers, so she was exposed to the art from a young age. She began acting at music, art, and performing arts high school in New York.

She couldn’t even get employment in commercials at first. For a couple of years, she worked at an ice cream shop and as a waitress. She borrowed money and spent her last few dollars to have photographs shot for her audition for “Friends”.

Friends’success and the iconic Rachel Green Aniston married Brad Pitt in 2000. The pair were favorites of the public and the media, who were always interested in what they were up to and, most importantly, when they were going to have children. However, the marriage collapsed in 2005, and shortly afterward, Brad Pitt made his connection with Angelina Jolie. Jennifer could have suffered from something that happens to many actors who play memorable characters: getting stuck in Rachel Green and never being able to be recognized for any other roles. “For the life of me, I could not get Rachel Green off of my back ” she said “I could not escape Rachel from Friends”

As an actor, she felt trapped and typecast, and she knew she had to branch out in order to grow into the layered entertainer she is today. “The Good Girl was the first time I got to really shed whatever the Rachel character was,” she continued. “And to be able to disappear into someone who wasn’t that was such a relief to me.” In 2015, Jennifer married Justin Theroux. In an interview, she said, “No one considers that it might be a sensitive subject for my partner and I. They don’t know what I’m going through emotionally or medically. There is pressure on women to be mothers, and if they are not, then they are damaged. Maybe my purpose on this planet is not to procreate. Maybe I’m meant to do other things. ” Jennifer thought she had reached her limit in 2016 and posted an open letter. For the first time, she faced people who spread pregnancy rumors years ago. She, on the other hand, did not take it personally and was not bitter in the least. Instead, she expressed empathy for others.

She said that, just as she was being humiliated, this is how all women are depicted, with a perverted idea of beauty. She expressed fear that girls would grow up feeling that they were only beautiful if they were slender. Her message inspired a lot of people. She thought that we were complete just by ourselves, and we had the right to decide what real beauty was. Jennifer also added, “Let’s make it for ourselves and for the young women who look up to us as an example to follow. We don’t have to be married or be mothers to be complete. We decide what our happy ending is. ” The Hollywood Reporter interviewed her at her home in 2021 to discuss the success of the second season of The Morning Show with Reese Witherspoon and the reunion of the “Friends” cast. Jennifer says that she no longer reads magazines. She used to take everything personally, even pregnancy rumors or the way people thought she put her career higher than having kids. Jennifer currently appreciates the achievements of her cosmetics company, continues to choose her projects, and wins career prizes, such as the Sherry Lansing Leadership Award in December 2021, when she remarked in her presentation that she feels her greatest work is yet to come.

She has been through ups and downs but is still brave enough to choose the life she wants no matter what public judgment says. Her story inspires people, especially women. And you? After reading this post, what is your opinion?

Toxic Traits That No Zodiac Sign Wants To Be Revealed, And They’re So Funny

Pisces – A Fantastic Dreamer And Poet

How A Sagittarius Respond To Love?