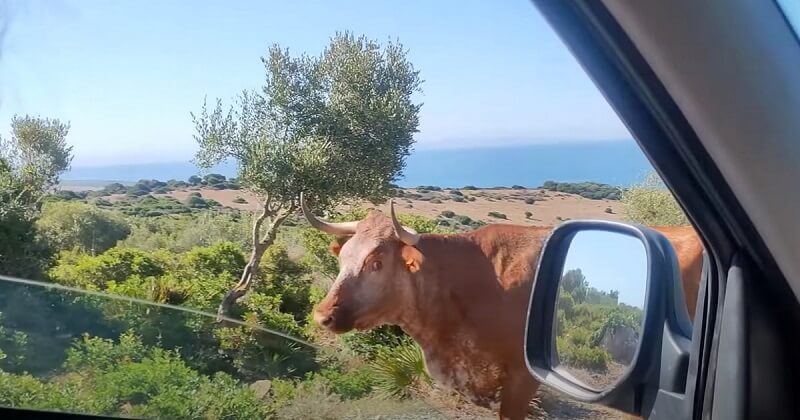 Nothing to see here, just a hilarious video of a cow giving passersby some directions to the beach. The video has taken the Internet by storm and put a smile on people’s faces.

The 15-second video captured on July 13, 2021, showed two people heading to Bolonia, Spain. They were on their way to a nearby beach when they saw a group of cows walking up the road. There weren’t any other humans around, so the drivers thought it would be funny to stop and ask the cows with jokes like they were people! It sounds crazy and silly to ask animals for direction, but the cow’s action shows that the men are not stupid. It tilted its head, showing them the correct direction. As soon as the cow pointed, the driver and recorder laughed and joked. They then thanked the cow and went on to enjoy their beach trip for the day! The user who shared the video says, “On July 13 we were driving to the beach without imagining that what I recorded would become a viral video. We asked a cow, who was walking along the Bolonia road that led to one of the most beautiful beaches in Cádiz – Spain. The question was the following: ‘Good afternoon, which way for Bologna?’ The cow indicates by turning its head towards where the Bolonia beach is. We did not believe what was happening at that time. When we saw the group of cows we said, ‘we’re going to ask the cow with jokes where the beach is,’ without imagining what was going to happen.” He ends by saying, “Thank goodness we recorded it because you try this and it never comes out. I recorded it and it was put together.” 
It doesn’t matter if it was chance or a miracle, what matters is the cow was right! Please share this video with your friends and family to make their day!

5 Amazing Animals With Their Habitat That Is The Coral Reef

The Blind Cat’s Steps In A Trip With His Man

“We Were All In Tears!” Emotional Moment Dog Is Back In Owner’s Arms After Being Missing For 5 Years

A Tiny Three-Inch Bird That Somehow Manages To Squeeze Seven Different Hues Onto Its Tiny Body Creating A Dazzling Rainbow Of Color!

Village Weaver Bird, A Bright Yellow Standout That Possesses The Skills Of A True Craftsman!