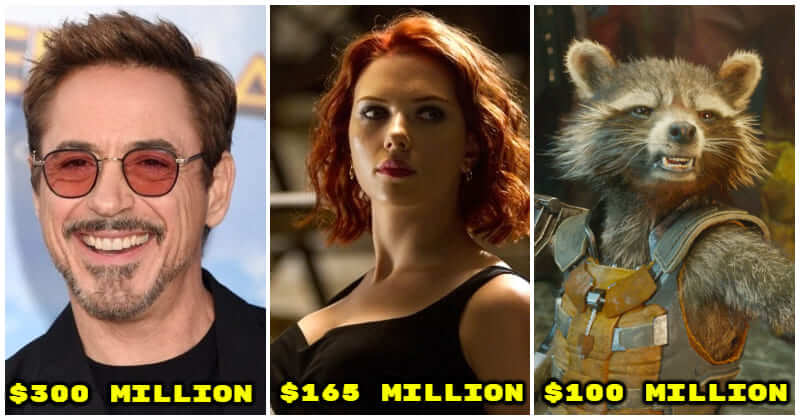 So far, it’s easy to see how successful MCU movies are, and it is understandable why they can do it. Firstly, they have used characters and storylines based on the original comics. As a result, they can take advantage of this amount of fans to build a community. Moreover, one big factor in a movie’s success is who gives life to the characters. Marvel did that so well as they chose perfectly appropriate actors, even for the animated characters. Consequently, Both Marvel Studios and its actors can benefit from this perfection.

Following the movie’s success, each actor can gain not only fame but also a significant amount of money, and below are the top twelve MCU actors and actresses who earn lucrative incomes from their roles thanks to the movie’s success. More than half of Paul Rudd’s bucks – US$41 million – come from the Ant-Man franchise and Avengers: Endgame, according to TheThings. Rudd was offered a modest US$300,000 for his first time playing the role. However, after Ant-Man brought in over US$500 million at the box office, he ended up getting a US$1.5 million dollar paycheque instead Thanks to playing the key role for a decade, Renner has earned some US$50 million, according to TheThings. In Endgame alone, Renner made a whopping US$15 million – reportedly the largest amount of money for any role he has played to date. Besides his acting, Renner is also a successful businessman as he bought and remodelled and sold over two dozen homes in California. Chris Evans makes most of his wealth from his iconic role as Captain America, per TheRichest, although he actually turned it down “a few times”. But thanks to the encouragement from family and friends, Evans finally joined the Avengers team with an initial salary of US$300,000 for Captain America in 2011, which ballooned into US$15 million for Endgame in 2019, according to Forbes. Thanks to his role as Thor, Chris Hemsworth has become one of Hollywood biggest stars. Relatively unknown in 2011, he was offered just US$150,000 for his first turn playing the God of Thunder, according to TheThings – which increased to a whopping US$30 million for the third film in the series, Thor: Ragnarok, in 2017 She raised her salary from US$400,000 – for her first appearance in Iron Man 2 – to US$15 million in Infinity War and Endgame, according to Yahoo! News. She also recently earned US$20 million for her first solo superhero movie Black Window this year – although this was less than she perhaps hoped to bank. She sued Disney+ for being short of at least US$50 million because of its simultaneous streaming and box office release, as per Insider. The Fast & Furious star earned US$54.5 million for playing the treelike alien Groot in the Guardians of the Galaxy and Avengers franchises, according to reports. It’s more than double of what he earned for F9 (US$20 million). He is the highest-grossing actor of all time in the US and Canada in 2021, making a grand total of US$5.65 billion at the US box office, putting him slightly ahead of his Marvel co-star Robert Downey Jr.’s US$5.47 billion and Tom Hanks’ US$5 billion, according to Statista. He made US$10 million salaries for both The Avengers and Iron Man 2, but per cent deals brought his total income to US$50 million by 2012, according to the International Business Times. He also earned another US$75 million apiece for Infinity War and Endgame, US$64 million for Captain America: Civil War and around US$15 million for his minutes-long cameo in Spider-Man: Homecoming.