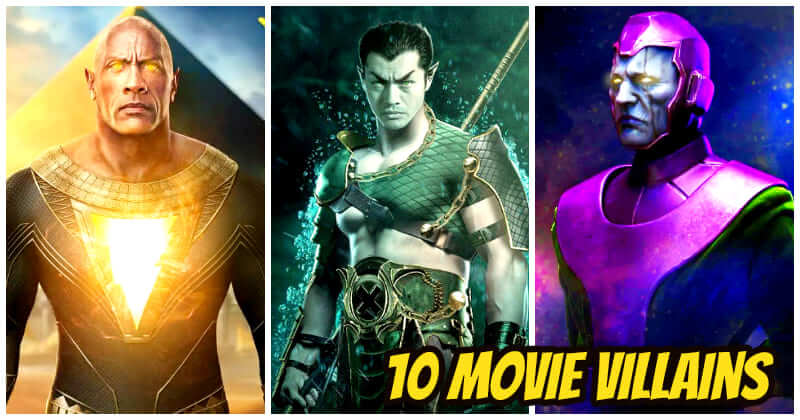 For superhero enthusiasts, we all know that compelling villains, in addition to superheroes, are what keep movies fascinating. So far, we’ve seen some mighty and crazy antagonists in the MCU, including Queen of Death Hella in Thor Ragnarock, Ultron in Avengers Age of Ultron, Dormammu in Doctor Strange, and the most impactful villain Thanos, who wiped out 50 percent of the universe’s inhabitants at the same time. We’ve also seen such complex and destructive villains in DC, one of whom is a fan favorite – Joker.

Therefore, in forthcoming Marvel and DC films, we’ll see some new villains that are far more deadly or strong than the MCU and DCEU’s previous adversaries. We’ll learn who those villains may be and what their abilities are in this post. In DC Comics, Dr. Zoom is a researcher from the future who develops a formula that allows him to become a speedster like Flash, and this character competes with Flash. Dr. Zoom was first featured in the DC comics series Flashpoint, and it now appears that he will be the antagonist in the next DC film The Flash. If you’ve seen Shazam 2019, you’ll recall that the sorcerer provides some background on Black Adam. DC is now developing a Black Adam movie featuring actor Dyawane Johnson, and in future Shazam flicks, Black Adam may be presented as a supervillain or antihero. Colonel Ross first appeared in the Incredible Hulk film, and we subsequently saw him in Captain America Civil War and Black Widow. Colonel Ross’s persona gets moved to Red Hulk in Marvel comics. The character of Red Hulk is expected to appear in the forthcoming Shehulk television series. We may call this character Aquaman of Marvel if we want to explain him in simple terms. In Marvel comics, he rises to the throne of Atlantis, and there are reports that he may appear in the next MCU film Black Panther Wakanda Forever. Namor’s character will also murder Black Panther in the MCU, according to reports. Mephisto is a Demon-like entity that is the ruler of Hell, a pocket universe. In Marvel comics, he is linked to the stories of several superheroes. As a result, this villain may feature in the next Rebooted Ghost Rider film. Those who have watched the Loki TV series season will be familiar with He Who Remains, the villain of the show, who was a version of Kang The Conquerer. He is a future scientist in Marvel comics who grasps the notion of the Multiverse and discovers a technique to travel between multiple realities for the first time. The statue of Kang The Conquerer was shown in the Loki TV series’ post-credit scene, and Marvel Studios has revealed that he will be the villain in the next Antman film. Galactus is one of those villains that can eat a whole planet; he was before the Big Bang and relies on life to survive, which is why he preys on worlds with sophisticated civilizations. Galactus will emerge as a villain in the forthcoming Fantastic Four movie. The God Gorr Butcher is a Marvel comics villain who murders gods. He has killed many gods and gained the power of each one he has killed. He’ll appear as a villain in the next Marvel film Thor Love And Thunder, and he’ll give Marvel’s Thor the God of Thunder a nice push. Dr. Doom is at the top of the list of forthcoming villains, and he will make an appearance in the MCU shortly. According to reports, much as Thanos was the villain of the Infinity Saga, Dr. Doom will be the villain of the Multiverse Saga.