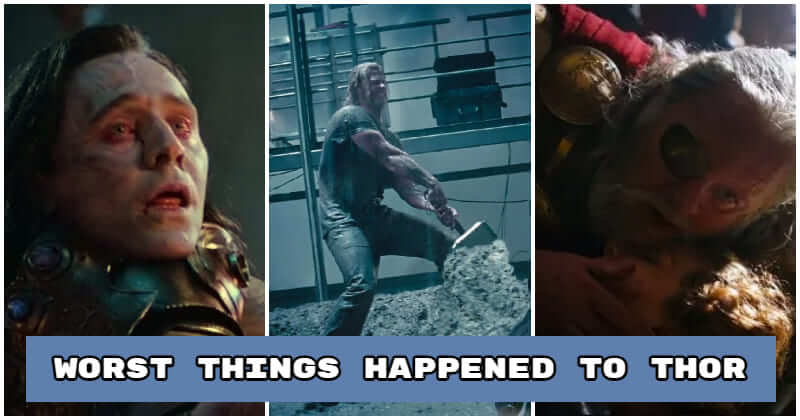 Among multiple superheroes in MCU, Thor still has a sense of uniqueness. Introduced in 2011, Thor, played by Chris Hemsworth, has an attractive looking with sunny-color hair, a big smile, and a heroic charisma, which is understandably why he can gain attention and love from the audience.

When it comes to the storyline, Even though Thor derives tremendous power from his father and the support from the Mjolnir, he still can’t avoid hindrance, stalemate, and misery throughout his life. But the way he suffered and surpassed makes him even more resilient not only physically but also in mental strength. Below are the ten most tragic incidents that happened to Thor.

1. He Is Exiled To The Earth With No Power After retrieving Thor from Jotunheim, Odin and Thor had a quarrel, which leads to Odin banishing Thor to earth, deprived of his powers, with his hammer Mjolnir within his reach but not answering his call. It’s a harsh lesson in humility, but this is one case where Thor probably had it coming.

2. Loki Tried To Kill Both Of Them Loki and Thor fight on the Rainbow Bridge, now directed at Jotunheim as a weapon of destruction. Thor destroys the bridge, and both brothers nearly fall into the abyss below. Odin catches them, but his words to Loki make Mischief God lose hope and he lets go, seemingly committing suicide under Thor’s horrified gaze. When Loki and Thor return home, Asgard. His All-Father passed away, which left Odin’s firstborn more powerful. As a result, Loki and Thor were impuissant to fight Hela. Meeting Hela costs Thor his hammer, as she catches Mjolnir with ease and destroys it. Thor is then taken captive on Sakaar and given a new haircut, much to his dismay. He makes his way back to Asgard, only to face the challenge his sister poses. Even at his best, Thor is truly no match for Hela, and he loses his eye before finally resorting to drastic methods to solve the problem

As Odin’s firstborn, Hela draws her power from Asgard and has an army of undead at her disposal. Realizing has no other option, Thor determines he has to sacrifice Asgard itself to stop her. He instructs Loki to resurrect the fire demon Surtur using the Eternal Flame. Tragically, everything goes as planned. Surtur defeats Hela, but it is by obliterating Asgard itself. Thor and Loki were seeking refuge for the remaining Asgardians, but before landed, Thanos had intercepted and taken control of Thor. At the time, Loki saw his brother torture, He made one final attempt to take out the Titan, but unfortunately, it cost him his life.

8. He Fails To Stop Thanos’s Snap-In His Quest For Revenge After Thor received a new hammer – Stormbreaker, he tried to confront Thanos, but Thor’s aim is off. Seeking revenge, he hits Thanos’s chest instead of going for an instantly lethal blow. This gives the Mad Titan time to use the Gauntlet and wipe out half of the life in the entire universe.

9. Confronting Everything He Lost During The Time Heist In the aftermath of his failure, Thor sinks into a terrible depression. He is unable to overcome his losses and succumbs to his grief. He becomes a recluse, taking refuge in alcohol abuse and Internet games. By the time the Avengers track him down years later, he is a shadow of his former self.

10. He Will Become Unworthy Soon Jane Foster is no longer romantically involved with Thor, but it seems she will take over his powers and become the Mighty Thor. This will probably be related to Thor’s imminent confrontation with Gorr the God Butcher. Whatever action triggers the loss of Thor’s powers, this will be a new blow for the God of Thunder, who has already lost so much. It really seems like Thor just can’t get a break.