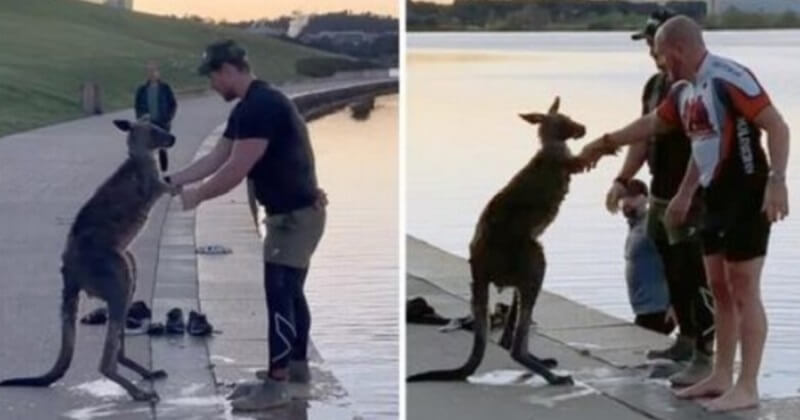 Just like us, animals have emotions and know how to show their gratefulness to people who help them. Therefore, when a kangaroo was saved from a freezing water lake by two heroic passers-by, he decided to use his own way to thank them. The heartwarming rescue filmed by David Boyd showed two men slowly approaching the trembling roo to help lift him up and put him out of the lake. The kangaroo was still frightened and nervous when one of the men came up next to him.

Finally, with the help of the third man, the heroic men were able to pull the kangaroo from the freezing lake, saving the poor vulnerable animal’s life. The kangaroo was in a bit of shock, and it took about 30 minutes for the animal to perk up again. As a gesture of gratitude, the lovely roo extended his hand to one of his rescuers and shook his hand. Everyone was melted by the kangaroo’s action but didn’t forget to thank these heroes for saving it from the worst.

You can watch the rescue video below:

Here’s how people reacted to the video:

“Wow, how the hell did the Roo not kick and scratch them is amazing, well done guys,” a person commented.

Another wrote, “Wow what an awesome job 👍👍 freezing cod 🥶 what a great story to start the day . Thanks for sharing.”

Little Girl Teaches Her Cats How To Draw A Flower