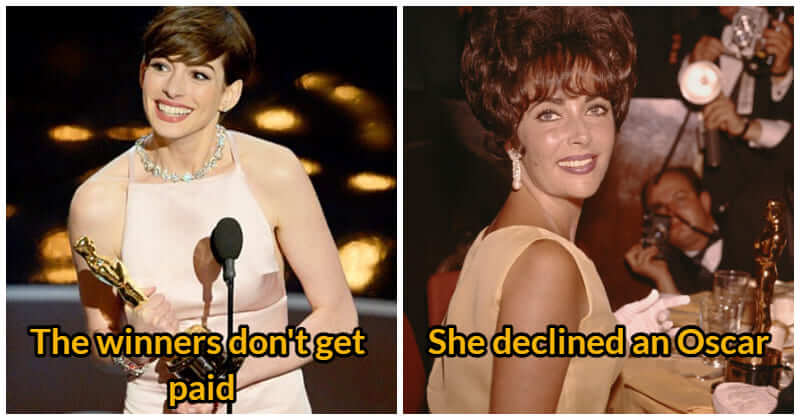 It’s time to brush up on our Oscars 2022 trivia! The glamour of Hollywood is on full display at the annual Academy Awards. These awards are presented for outstanding achievements in filmmaking during the preceding year. We all know that this is the most prestigious award in the field of cinema that many artists get their hearts set on. But a few people know the interesting secrets behind this prestigious award ceremony!

The following are 12 lesser-known facts about Hollywood’s biggest night of the year. Scroll down to learn all about the Oscars!

#1 It takes about one month to get ready for the red carpet. “The Oscars is the most visible awards show worldwide, so when someone wears a dress from a designer, it’s like a massive ad campaign for them,’’  said Hollywood stylist Tara Swennen, whose clients include Kristen Stewart and Julie Bowen. “It really is worth it.” And it’s not just the dress. A-list stars also need to pay attention to their physique. So, it takes them a team of specialists and about a month of grueling workouts to get in shape for this event. Most stars borrow designer gowns, which are only available in “sample size,” somewhere between 2 and 4, Swennen said: “If you don’t want to pay for it, you have to fit into it.” Hence the scramble to slim down. Experts in fitness and nutrition say it takes roughly four weeks to attain optimal results.

#2 The most expensive gown worn at the Oscars was worth 4 million dollars. Remember when Jennifer Lawrence made news for tripping on her way to get her Oscar for best actress? Well, she at least tumbled on those stairs in style as she went down in a pricey piece from Christian Dior Haute Couture – the most expensive to ever be seen on the red carpet for the Academy Awards.

#3 Why do the photographers shout? Every nominee receives a six-figure gift bag, which includes a variety of items and experiences. Companies pay up to $20,000 to the marketing firm in charge of putting together the goodie bags in exchange for the opportunity to have their products in the hands of the world’s most famous people. By no means are the presents modest. In fact, the luxurious gift bag for 2020 was worth a whopping $225,000 and contained items such as a fashionable bra and a luxury trip. The unfamiliar faces we see as the camera pans to the audience are actually volunteers filling empty seats. At the Oscars or any other important awards ceremony, no seats are left empty. The stars are not even allowed to leave their seats outside of halftime. #6 No snacks or beverages are allowed. It’s no wonder that celebrities grow hungry because getting dressed for an event, strolling the red carpet, posing for photographs, and attending the ceremony may take hours. However, in order to prevent ruining their pricey gowns, they avoid eating, and snacking during the awards ceremony is absolutely banned.

However, in a few cases, celebrities have managed to sneak backstage and get a snack before entering the theater. #7 What happens during commercial breaks? During commercial breaks, you can see staff members rushing to clear the stage, seat fillers rushing to fill empty seats, and celebrities taking the opportunity to stretch their legs or go to the restroom. It’s also the perfect time for celebrities to flip through their speeches one more time before taking to the stage. #8 The Oscar winners don’t get paid. On the night of the Oscar ceremony, no money is presented to the winners. There is, however, a significant benefit in other ways. For starters, according to Business Insider, Oscar winners in the Best Actor and Best Actress categories are eligible for a 20% salary raise for their next film. They are also more likely to get top picks of films, directors they want to work with, and production companies. Greer Garson, an American actress, made the world’s longest acceptance speech in 1942, lasting six minutes. After that, the Academy agreed to shorten the speech to 45 seconds. On the teleprompter, there are reminders, and after a winner has surpassed their time limit, the play-off music begins. The microphone shuts out if they continue to ramble.

#10 If something goes wrong, tell a joke. There is a team of comedy writers that specialize in writing last-minute jokes in case something goes wrong or to cover up potentially awkward moments, like if the host falls or if the wrong winner is announced. But the Oscar jokes are carefully selected: “You have to be careful to not cross the weird line,” former head writer for the Oscars, Bruce Vilanch, explains. #11 Nobody really knows why the statue is called Oscar. Initially named “the Academy Award of Merit,” it’s still a bit of a mystery where “Oscar” came from.  According to one rumor, actress Bette Davis named it ’’Oscar’’ because it resembled her husband, whose middle name was also Oscar. However, another prevailing rumor also holds that academy librarian, and eventual executive director, Margaret Herrick joked about the back of the statuette looking a bit like her Uncle Oscar.

#12 Liz Taylor once declined the award. Elizabeth Taylor didn’t accept her Academy Award for “Who’s Afraid of Virginia Woolf?” but it wasn’t completely her decision. Elizabeth was married to Richard Burton at the time, who had been rebuffed by the Academy on several occasions. The pair were both nominated for the 1966 Oscars, but Richard reportedly refused to go because he didn’t want to lose for the sixth time. Instead, he organized a trip to Paris and persuaded Elizabeth to accompany him instead of going to the show. At the time, Elizabeth explained her absence was due to Richard’s fear of flying but when she refused to issue a statement thanking the Academy for her win, it became obvious that her intentions were different.