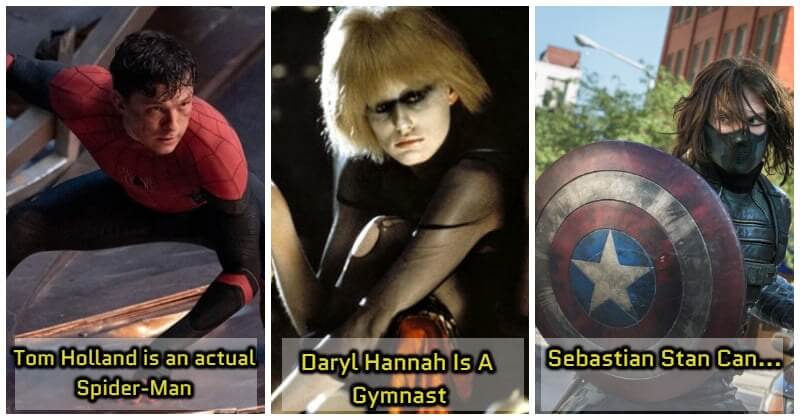 The importance of cascadeurs or substitute actors in the movie is beyond doubt. Because in several scenes, characters need to take menacing actions or do some artistic talents like playing an instrument, not all of the actors can meet those criteria and it’s such an uphill task for the director to seek an impeccable actor like that to fit the role.

But in the list below, we will show you some actors who have actual abilities to take the scenes themselves with neither need of substitute ones nor cinematic effects. Even based on their skills, the directors have changed scripts to fit their talents. Now take a look at these 11 actors and how they have done the scenes independently. Murray actually bowled three straight strikes and did so on his first attempt in Kingpin. Authentically, the reaction of the crowd is ebullient and enthusiastic. As co-director Bobby Farrelly recalled: “When we got to the final part and Bill had to get three strikes in a row, I figured it could take 10 to 15 rolls. It’s gonna take a while for him to get three strikes.”

2. Tom Holland Really Can Do Whatever A Spider Can In the cast for Peter Parker in Spider-Man, even though Tom Holland can actually jump, flip, and tumble around like Spider-Man. But Holland also inserted some gymnastics into his audition tapes: “They gave me two scenes… and I basically did like a somersault into the frame, and then a somersault out of frame, because I was like, “They may never see this, but if they do, I need them to know that I’ve got some gymnastic abilities and stuff.”

3. Keanu Reeves Got His Big Break Because Of His Hockey Goaltending Skills Reeves was a star goaltender nicknamed “The Wall” who was good enough to receive a tryout offer from a major junior club.Then Reeves was cast as Rob Lowe and Patrick Swayze’s goalie in the infamous hockey drama Youngblood, where his trademark deadpan deliverance probably earned him a few more lines than was originally intended

4. Daryl Hannah Was A Trained Gymnast, So They Rewrote The ‘Blade Runner’ Fight Scene To Show Off Her Skills Daryl brought something to the table that other hopefuls could not in the audition for the role of Pris in Blade Runner, – a talent so impressive that it inspired Ridley Scott to rewrite the character’s big scene. “I did some gymnastics for him, then he asked me to do it again in my audition, a very elaborate three-day filmed affair on the Warner Bros. soundstages with rain and smoke, and then during my screen test. The other girls auditioning didn’t have that in their concept of the character. He rewrote the scene based around that idea.” said Daryl

5. Captain America: Civil War’ Has A Scene In Bucharest Where Romanian-Born Sebastian Stan Got To Show Off His Native Language Sebastian Stan was actually born in Constanta, Romania. In the scene where Barnes hides out in a safehouse in Romania. On the way, he stops by a fruit stand and purchases plums in fluent Romanian – though the touching moment is cut short by Barnes’s discovery that he’s been framed for a war crime.

6. Tom Cruise Hanging from the Outside of a Plane In honor of his 58th birthday, we’re taking a look at five of the craziest stunts Tom Cruise has ever performed:

7. Denzel Washington Actually Scored On Ray Allen During ‘He Got Game’ Even Though He Wasn’t Supposed To Spike Lee, the director of “He Got Game” told: “Funny story. In the script, Jesus is supposed to beat his father 11-nothing. People don’t know that Denzel played junior varsity basketball at Fordham under [famed college and pro] coach P.J. Carlesimo. So no matter what I wrote, he was intent on scoring at least one basket. And Denzel threw up three or four lucky shots that went in.”  While Allennly remembers, “Everybody on set, including my acting coach, was up in arms. They were mad at me because I let him score.”

8. Steve McQueen Suggested They Add The Motorcycle Chase To ‘The Great Escape’ So He Could Show Off His Biking Skills McQueen’s character was initially supposed to make his escape on a train in the scene. But instead, he came up with the idea to use a bike, reportedly telling John Sturges, “John, I’ve got an idea that will put more juice into this…”

McQueen, a former professional motorcycle racer, was excited at the possibility of showing off his skills onscreen. He performed all of the stunts seen in the film himself, save for the one 6-foot jump over a barbed-wire fence, which was performed by stuntperson Bud Etkins.

9. Lance Henriksen Can Really Do The ‘Knife Trick’ From ‘Aliens’ Henriksen gets asked all the time if he can pull off the trick of stabbing a knife between his fingers at ever-increasing speeds in real life.Henriksen, who spent time in the Navy, told The A.V. Club: “A cop pulled me over at one point – this was really funny – and he tapped on the window, and then he looked down at me and said, “Bishop!” And he said, “Do the knife trick!” [Laughs.] Yeah, I’ve been asked to do that about a million times.
He said, “Get out of here. Just don’t do that in front of me.”

10. Mandy Patinkin Was A Trained Fencer But Still Worked With A Fencing Coach Eight Hours A Day For Two Months To Master The ‘Princess Bride’ Swordfight Patinkin came into the scene with a leg up, having studied fencing at Juilliard years later, but that didn’t save him from a grueling schedule of sword-fighting rehearsal.

11. Dustin Hoffman Is A Talented Pianist Who Wrote The Song He Performs In ‘Last Chance Harvey’ Hoffman composed a song he called “Shoot the Breeze” after a romantic misfire, and in 1977, after Hoffman had achieved fame, Bette Midler wrote lyrics for it, and they performed it together. It’s that same song that Hoffman, portraying a man who never got to live out his dream of being a jazz pianist, plays in Last Chance Harvey. “I originally wanted to be a jazz pianist,” said he.