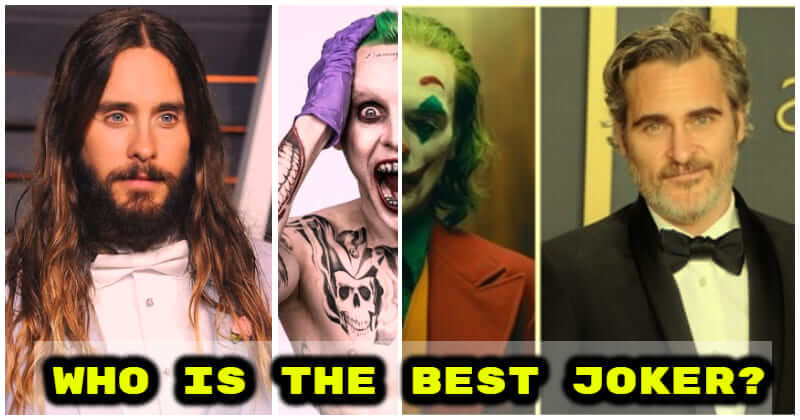 To have the incredible success of the name Batman, DC has to thank Joker’performance a lot, who is supposed to be the most infamous villain in DCU. Tracing back the first Joker version played by Cesar Romero to the latest version played by Joaquin Phoenix, we can see various aspects and colors of Joker, not only a version of madness and badass in the Batman series but also a comedian Arthur Fleck seeks connection as he walks the streets of Gotham City. Moreover, there are multiple animated movies voiced by Jeff Bennett or John Dimaggio that also draw attraction from the world.

In short, every Joker version has different characteristics, voices, or traits. So who is your favorite? Check out the list of top 10 Joker versions voted by fans below and see whether your favorite one is there. And we would love to see your opinion. Stay tuned! The actor took on the role of Batman’s infamous supervillain in the 2019 film that’s quite different from its predecessors, as it serves as the origin story of the killer clown. Similar to Jared, Phoenix transformed physically and mentally with his method of madness – losing 52 pounds for the role! In what was perhaps the most celebrated Joker portrayal of all time, Heath Ledger was posthumously awarded the Oscar for Best Actor following his performance in the critically acclaimed sequel to Batman Begins (2005), The Dark Knight (2008). 46-year-old Jared, took a stab at DC’s esteemed supervillain, the first major onscreen debut since Heath Ledger’s performance in 2008’s The Dark Knight—an act critics agreed was tough to follow. Despite its overall negative reception,  The movie defied its reviews to become a box office smash. Spiner, best known for his role as Data in the Star Trek franchise voiced the Joker in the series centered on teenage superheroes like Robin and Superboy, intended to be the younger version of the famous adult Justice League. The original Joker, Cesar Romero, was known for his acting and singing skills well before playing the iconic character in the first of the caped vigilante films, Batman: The Movie (1966). Nicholson told MTV his acceptance of the role stemmed from his confidence and admiration of Burton’s vision as well as his direction: “Tim Burton’s a genius. He had the right take on it. That’s why I did the movie,” he said. “I did the movie based on a single conversation with him. We both come from the cartoon world originally. We had similar ideas.” Kicking off the DC Animated Universe with his first appearance in the Emmy-nominated Batman the Animated Series (1992), Hamill has since gone on to star in adaptations of The Justice League and Superman. Kevin that the Joker was his favorite character to play. “He was like a crazy sick sandwich. He had his highs and lows and the laugh, I almost passed out every time doing that laugh, but I would love to do it again,” he said. In Batman: The Brave and The Bold, the characters’ designs were modeled after those from the 60s era, creating a lighter-hearted tone throughout the movie, better suited toward younger audiences. Produced by Warner Bros, it became the eighth animated feature in the DC Superhero Universe. DiMaggio, better known as Bender from Futurama and Jake the Dog from Adventure Time, played the former Robin (Jason Todd)’s abductor and relentless torturer in the film.