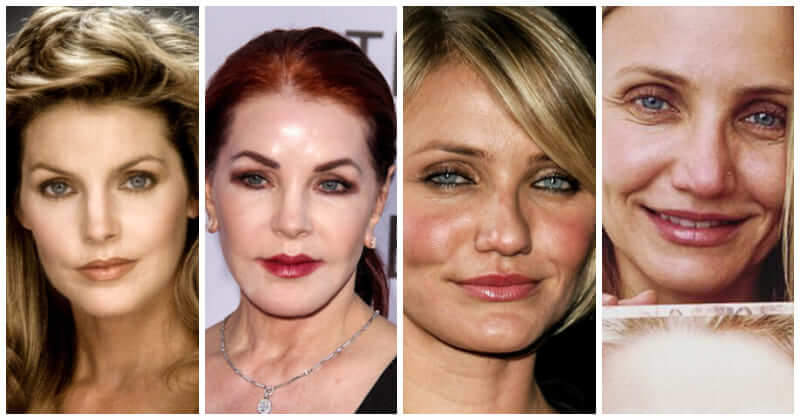 As time goes by, the beauty standards for women have gotten so high that sometimes they seem unrealistic. People have become more aware of what they look like in public settings. It led to the appearance of many methods that make people more perfect. One of them is plastic surgery, which has grown considerably in recent years. People use it as a way to effortlessly achieve their beauty goals. However, not everyone is happy with their transformation. The 16 celebrities in this post are examples. After having cosmetic surgery, they regretted it and wanted to take back their natural beauty.

In the entertainment industry, it is common for actors and performers to have cosmetic surgery. Many celebrities have admitted to going under the knife to preserve their youth and overcome their insecurities. Some celebrities are pretty happy with their new looks after having cosmetic procedures. Unfortunately, that’s not the case for stars like Kim Kardashian and Tara Reid. They underwent major complications or procedures that just didn’t turn out to their liking.

Here we have a list of celebrities who regret getting plastic surgery. If you’re curious about who they are, don’t skip! Cameron Diaz claimed in a 2014 interview that she had used Botox in the past but didn’t enjoy the results since she didn’t recognize her new look. Now, Cameron is a supporter of natural aging. She also loves her grin lines, which demonstrate that she is happy and smiles a lot. Jessica Simpson said in a 2006 interview that she had undergone lip injections but was happy when the results disappeared. She decided not to have another lip injection surgery in the future since she was unhappy with the outcome.

#3 Kylie Jenner had plump and fillers on her lips because of insecurities. As a teen girl, Kylie Jenner was self-conscious about her thin lips, so she plumped them up with injections and fillers. Even though she doesn’t want to return to her natural lips, she confesses that she went too far at one time. It was a terrible experience that she swore she would never repeat. Melanie Griffith wasn’t aware she’d gone too far with her plastic surgery until someone pointed it out to her. Melanie was offended by these comments and began seeking a new doctor, who guided her in reversing some of the treatments. Like many other celebrities, Jamie Lee Curtis has experimented with cosmetic surgery. However, she admits that neither of these worked as well as she had expected. Gwyneth Paltrow has also dabbled with Botox. She is not against all beauty treatments and may try others in the future, but not Botox. Gwyneth said she “looked crazy” after using it.

#8 Chrissy Teigen had breast implants due to her modeling career. The reason Chrissy Teigen underwent surgery in the first place was because of her modeling career. But she decided to remove her breast implants in 2020 due to breastfeeding complications.

#9 Ashley Tisdale faced some side effects after breast implants. Ashley Tindale got cosmetic surgery but didn’t get a good result. She had some unpleasant side effects, and she had to remove her breast implants in 2020.

#10 Jennifer Grey after her nose job. Jennifer Grey now blames the surgery for her career failures. Perhaps you don’t know that she underwent rhinoplasty surgery in 1989, just a few years after starring in the hit film “Dirty Dancing”. As time went by, she regretted the changes in the shape of her nose when she saw them.

#11 Cher didn’t get the desired results after breast surgeries. Cher’s breast augmentation made the singer disappointed and did not generate the desired results as she expected. She thought it made her appearance much worse than before. As a result of an unsuccessful cosmetic procedure, Linda Evangelista’s face got plump. She is unhappy with it and said that she no longer identifies with her previous self. Tori Spelling underwent breast implants in her early twenties. Later, the implants had a negative influence on her ability to nurse her children, leading her to regret the treatment.

#14 Nicole Kidman wasn’t exactly happy with her Botox surgery either. After getting Botox, Nicole Kidman felt like she had a frozen face. She had decided that she did not want to have any further procedures in the future. Kim Kardashian said that she had her hairline changed with electrolysis. She had a laser to eliminate the baby hairs on her eyebrows, but she was still disappointed with the outcome years later. She also stated that she misses her baby hairs because they made her appear more “young.”

#16 Priscilla Presley had injections that gave her an ugly look. Priscilla Presley confessed that the treatments she had received were dangerous and gave her an unattractive appearance. The actress thought she had terrible plastic surgery, and after that, she regretted it.

What Makes Kang The Conqueror Different From He Who Remains, MCU Filmmaker Explains

Doctor Who Season 14: Release Date, Cast, Plot And Everything You Need To Know

All The Hurts Taylor Swift Suffered All The Time, Revealed In “Midnights” Album