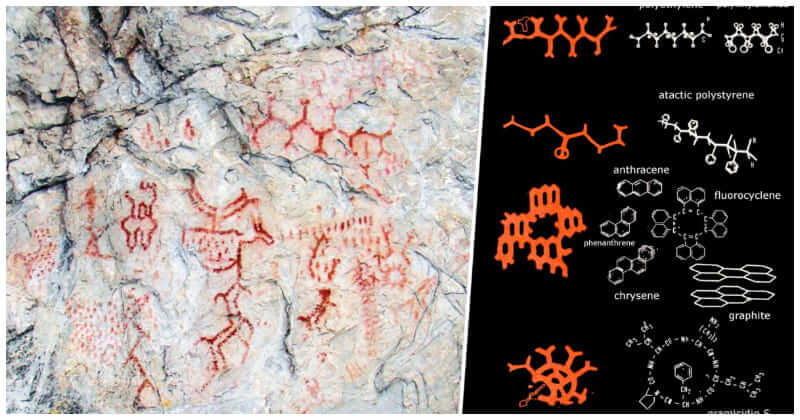 This appears to be impossible according to mainstream scientists. How could people living 5 millennia ago acknowledge modern chemical structures and write them down under the form of petroglyphs? The site in Ural, Russia has raised heated debate since its discovery.

The Ural region houses numerous mysteries, in which the large are filled with strange petroglyphs on the banks of several rivers, including Tagil, Tagil River, Neyva River, Rezh River, Yurozan River, and other surrounding locations.

On numerous stones at the site, a number of enigmatic figures and geometrical shapes are described, stretching 800 km throughout a vast quantity of rock formations.

The exquisite carvings are thought to date back 4,000 to 5,000 years ago, believed to be a combination of letters, symbols, and animals, a kind of prehistoric art discovered in several rock paintings sites throughout the world. The Ural petroglyphs have been recognized for centuries, intriguing generations ever since its first discovery until now. Even the Tsar of Russia, in 1699, had the petroglyphs replicated.

Still, it only became famous when Russian scientist Vladimir Avinsky, an Atomic, Molecular, and Optical Physicist carried out a thorough examination, revealing the striking likeness between a number of the symbols and highly sophisticated chemical formulas.

The question now lies in how the ancients knew about such things millennia ago.

In Avinsky’s opinion, advanced aliens visited ancient civilizations, bringing with them knowledge to pass down onto humanity. The Ural petroglyphs, according to him, are depictions of sophisticated chemical formals including chains and polygons utilized in organic chemistry.

Some of the unusual symbols and chains even looked like polyethylene, said Avinsky, though others did claim that they looked best similar to animals of fishing nets. There is another figure discovered on the riverbanks, appearing like a honeycomb. Mainstream experts have failed to clarify the meanings and importance of numerous geometric shapes that prehistoric people drew hexagons and extended them with several lines. One petroglyph is thought to describe the molecular structure of antibiotics.

The Russian scientist described the puzzling Ural pictograms to a number of chemists, the majority of which agreed with him that these bore resemblance to certain chemical formulas.

Avinsky remained convinced that this could not have been products of ancient civilization living thousands of years ago. But the Ural petroglyphs still situate where they are now, and still bear great resemblance to advanced chemical formulas. This cannot, and should not be attributed to sheer coincidence.

Where the Ural pictograms came from remains unexplained, causing archaeological work around the Ural region even more intriguing. Meanwhile, several experts still believe that the wisdom is acquired from visitors from the galaxy who traveled to Earth in prehistoric times.

Strange Viking Sex Rituals That Can Take You Aback