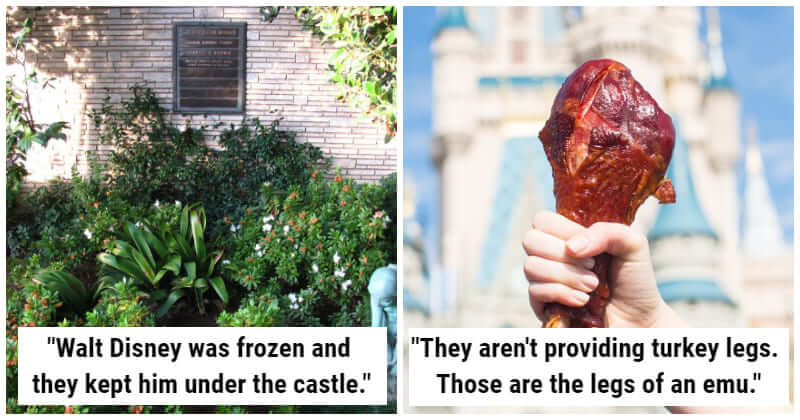 Opened 50 years ago, Walt Disney World is a 25,000-acre theme park that attracts 52 million visitors each year. As an exciting destination on weekends and holidays for both kids and adults, some rumors and myths about the theme park have spread widely. And Walt Disney, in particular, was a visionary who frequently spoke of the future and new inventions. So, let’s find out if these hearsays are true or not with us!

Below, we’ve compiled a list of the most common rumors, and some of them are actually genuine. It’s more fun to believe in rumors than it is to trust reality, which is often tedious, right?

Therefore, why don’t you scroll down to check this new post full of excitement now? We are sure you are all curious to find the answer to your questions about Walt Disney World!

#1 Rumor 1: “They aren’t providing turkey legs. Those are the legs of an emu.” Farmed male turkeys provide the enormous turkey legs eaten at Disney. That is why they are so massive. On the other hand, Emu is a massive bird that is slightly smaller than an ostrich, thus an emu’s leg is around the same size as yours. Another point is that mislabeling food would be a big violation of the law, with the corporation facing criminal punishment and civil litigation.

#2 Rumor 2: “Disney needs your fingerprints so they can track you.” This is just to prevent ticket fraud, so only you can use your Disneyland tickets. Once they scan your finger, they assign you a number and wipe your fingerprint. But if you don’t want to do it, there are some ways you can avoid it. View Disney’s Privacy FAQ here.

#3 Rumor 3: “Disney cast members are not allowed to say no.” In fact, Disney cast members are taught to say “no” softly instead of actually saying it. But if they can’t meet a client’s request or don’t comply with company policy, they won’t say “no” but will be fine.

#4 Rumor 4: “The Main Street and Cinderella’s Castle are optical illusions.” When you stroll from Main Street Station to Cinderella Castle, the walk may seem longer than it actually is. Disney Architects used forced perspective on Mainstreet buildings and castles. Forced perspective is used in many parts of Disneyland to make a fairly small space appear larger. The best place to see just how big the Magic Kingdom really is is the observation deck at California Grill. No new countries are currently planned, but there will be space for at least three new pavilions throughout the world show. Back in the 1980s, EPCOT visitors looked forward to pavilions in Spain, Israel, and Equatorial Africa. With the possibility of adding countries, this rumor will continue to circulate because people actually hope it’s true.

#6 Rumor 6: “Walt Disney was frozen and they kept him under the castle.” This is absolutely not true! Walt Disney lies beside his beloved wife Lillian at Forest Lawn Memorial Park in Glendale.