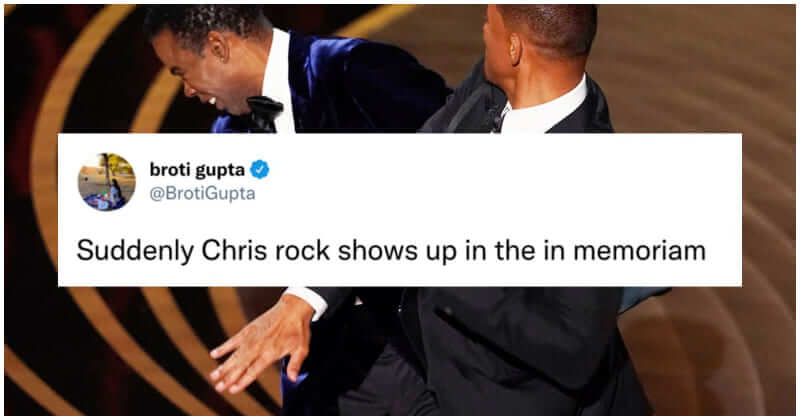 Just in case you didn’t watch the Oscars or didn’t know what that “slap heard around the world” means, here you go. So, Chris Rock was the MC at the Oscars ceremony this year. And as expected of a comedian, he was good at making jokes. But like, there’s a fine line between a joke and an offense. That’s why if you’re not subtle enough to keep your joke within the border, you need to prepare for the consequences.

Chris Rock made a joke about Smith’s wife, Jada Pinkett-Smith. His joke was a reference to the “G.I. Jane 2” when Demi Moore shaved her head to better portray a woman going through Navy SEAL training. But you know, Jada Pinket-Smith has been open about her struggles with hair loss and Alopecia, so the joke was mocking that. Okay, not cool. Body sh**ing has been a subject of criticism for ages. And of course, no husband would ever let anybody talk to his wife like that.

#1 So here, in case you missed it, the “slap heard around the world” #3 I can hear this picture: “keep my wife’s name out your fcking mouth” #4 Guests at the Oscars were frozen upon the incident. Wait, why Ryan Gosling was smiling down there? #6 Well, they may have seen their life flash before their eyes #8 Intended or not, it was not a cool thing

#11 Right or wrong, things have been done. Will Smith apologized for slapping Chris Rock Incredible Makeup Transformations That Prove “Every Woman Is A Hollywood Star”

“Men, DO THIS”: Bartender Warns Woman About A Suspicious Guy, Inspires Others To Share Similar Stories

16 Guys Who Have Earned The Moniker “Rad Dad”

15 Restaurants That Take Social Distancing To A Whole New Level

These 20 Tragic Hairdo Accidents Will Make Your Week