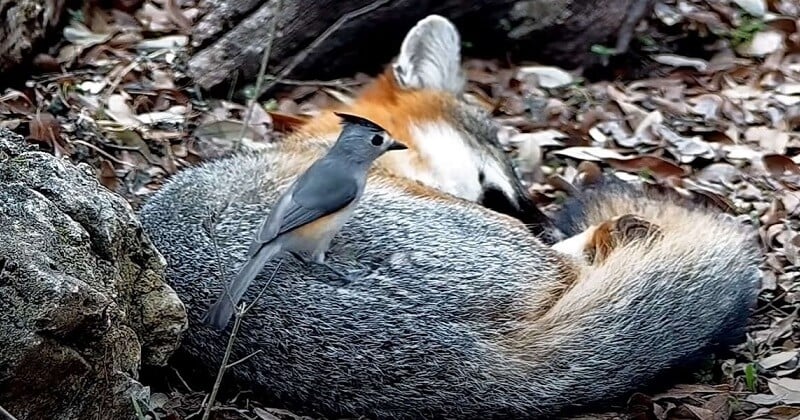 Birds are scared of foxes, so they often try their best to avoid them. But this little black-crested titmouse is a different case entirely. Not only does she approach the fox, but she also tries to cozy and relax on his soft fur. It is clear that it’s worth the risk when it comes to comfort. The incredible moment of a black-crested titmouse had an unusual encounter with a sleeping fox was captured at Texas Backyard Wildlife. They then shared the fascinating video on social media, where it went viral and won everyone’s heart. In the video, the fox sleeping in the sunshine outside a den was being disturbed by the tiny titmouse. The bold bird was seen repeatedly landing on the fox and doing everything she can to interrupt the fox. She pecked at the fox, jumped on his back, and launched little kicks at his side. Every time the fox stirred and tried to get her to leave him in peace, she flew out of his reach. And then came back. The sleepy fox seemed little more than annoyed by the jostling of the bird. Despite the bird’s disturbances, the fox decided to try to sleep for a while. And in the end, she got exactly what she wanted.

What does the titmouse want exactly? Turns out, as Texas Backyard Wildlife explains, she’s actually there to steal the fox’s fur:

“Turns out this is what she was thinking: “This is a very furry fox. Fox fur makes a nice, soft nest lining. Surely this fox doesn’t need all his fur? Summer is coming, after all. Surely he won’t mind if I take some?”. And that’s what she did. Once she’d established that the fox wasn’t going to kill her, she went to work plucking out fur and the fox let her do it! We were astonished. She hopped around on the fox’s back, harvested a beakful of fur, and took off with it. She was back the next day for more.”

Please share this video with your friends and family members to make their day!

Cheetah Sees Wildlife Photographer Taking A Nap, Decides To Join Him And Nap Too

20 Times Pets Feel Red Cheeks Coming On When You Look At Them, And That’s Cute!