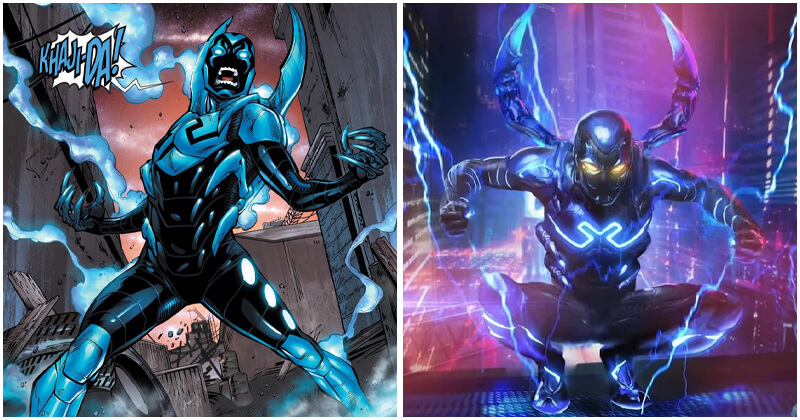 The production of Blue Beetle is proceeding apace and according to the latest updates, the movie seems to feature the presence of two distinct villains, one of which apparently linked to the predecessor of Jaime Reyes.

In fact, a new rumor has suggested that one of these two villains mentioned above has a family bond with Ted Kord, the second and also the best known Blue Beetle.

As we can see from the film’s first official concept art, Kord Industries may play an important role in Blue Beetle. Kord Industries is a company managed by Ted Kord, who in turn took the suit from the original hero Dan Garrett. You can take a look at this concept art below: According to The Cosmic Circus, the presence of Kord Industries will lead the way for a new villain created especially for the film, Victoria Kord. If this rumor is confirmed, it will be interesting to verify the link with the aforementioned Ted Kord.

The other villain in the film seems to be Conrad Carapax, aka Carapax the Indestructible Man, but we have to wait for further confirmation on this.

As DC fans already know, Blue Beetle will focus on the adventures of Jamie Reyes, a Latin American boy destined to take on the identity of the well-known superhero and become his third incarnation. Created by Keith Giffen, John Rogers and Cully Hamner, this character made his debut in the 2006 book Infinite Crisis #3 and, unlike his predecessors, received his powers via an alien scarab.

Previously, the Blue Beetle suit was worn by Dan Garrett, the original Blue Beetle who appeared in the Golden Age of comics, and by Ted Kord in the Silver Age. The film is written by Gareth Dunnet-Alcocer and directed by Angel Manuel Soto, who expressed all his enthusiasm in being chosen to direct the first superhero movie starring a Latin American protagonist in a statement to The Wrap a few months ago.

“It is an honor to direct Blue Beetle, the first Latino superhero film for DC,” he said. “I want to sincerely thank everyone at Warner Bros. and DC for trusting me to bring Jaime Reyes to life. I can’t wait to make history together.”

In Blue Beetle, it is Cobra Kai star Xolo Maridueña who lends his face to Jamie Reyes. The cast of the film also includes Bruna Marquezine as Penny, Belissa Escobedo as Milagros Reyes, George Lopez as uncle Rudy, Adriana Barraza as Nana, Elpidia Carrillo as Rocio, Damián Alcázar as Alberto and Harvey Guillén in a mystery role.

Blue Beetle is expected simultaneously on the big screen and on HBO Max on August 18, 2023.