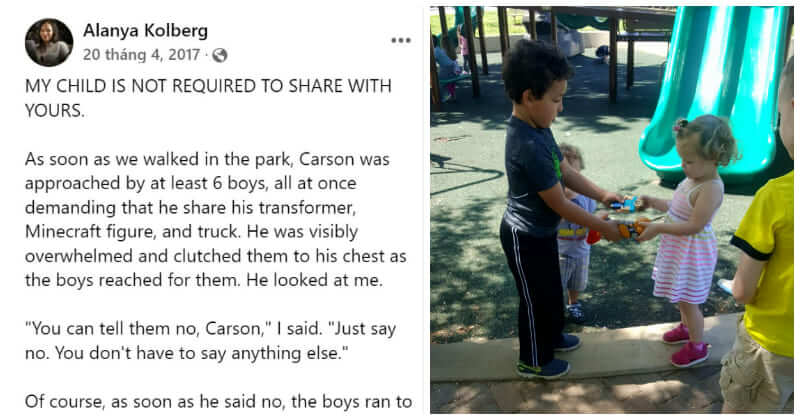 Is it OK to let your child refuse to share toys with other kids? Well, yes, for a good enough reason. When Alanya Kolberg‘s son, Carson, was overwhelmed by a group of boys who demanded him to share his super cool toy, Kolberg told her son that he could simply say “No”.

As she could expect, the decision earned her some dirty looks from other parents who assumed that it was ‘bad parenting’. Therefore, Kolberg left a massage on Facbook with a reason for her behavior.

In her viral post that gained thousands of likes, shares, and comments, the mom mentioned how many people were holding a misconception of raising ‘good kids’ that a good kid must be sweet, nice, willing to share toys with others without a question. It sounds like a great theory, but actually, it is unrealistic.

Kolberg also gave some reasons for not forcing her child to share toys as below: Kolberg’s Facebook post is persuasive enough for netizens to stand by her side. It soon became clear that Kolberg is not the only one who has the right conception of how to raise a child probably. In conclusion, Kolberg ended her post with an explicit message: “We don’t live in a world where it’s conducive to give up everything you have to anyone just because they said so, I’m not going to teach my kid that’s the way it works.” Do you agree with her?

12 Hilarious Moments Of A Taurus During Quarantine Time

15 Funny Moments Showing Two Opposite Personalities Of A Scorpio

15+Funny Aries Memes That Make You Smile All Day