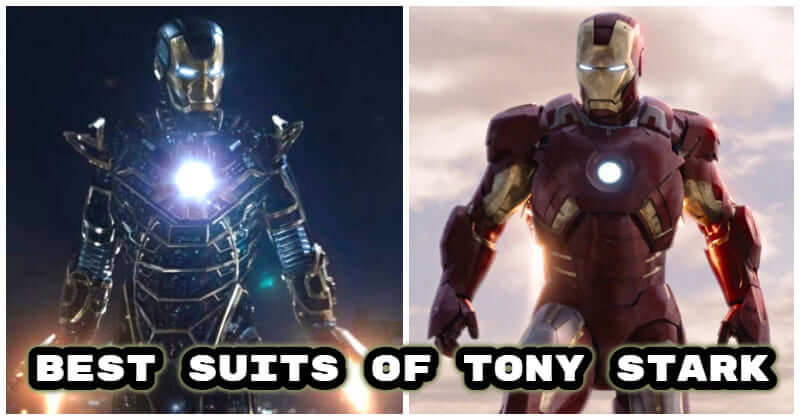 Tony Stark, a symbol of humans’ intelligence and resilience, has given birth to a variety of armour against terrorists to even Thanos – a literal god. That’s right to say Tony is a playboy, philanthropist, but not a hero in the absence of these armours. They proved Tony’s relentless dedication to improving and refining his own tech and stood as symbolism for his own character arc through his 10 MCU films.

Over 10 movies he got involved in, virtually 100 armours have been generated. Each has its function and was gradually upgraded to fit with the tougher fights. However, not all of them have appeared onscreen, the genius Avenger only wore 19 though. I’ll name some of the pivotal suits attached to unforgettable scenes of Iron Man. It’s hard to name all of them, so below are the top 15 suits that might give you a sense of retrospection. Perfectly resembling the classic look of Steve Ditko’s comic book illustrations, Tony’s final armour blends Mark L’s sleekness and nanotechnology with a visibly more muscular and stronger design. This most perfect suit can withstand a fight against Thanos and harness the power of all six Infinity Stones. The Mark L can materialize and reshape itself in a matter of seconds, it also has a wide variety of missiles, thrusters, cannons, blades, hammers, shields, wings, freezing spray, and even glasses. The design, however, is the same as the Mark XLVI, although its main improvement is the ability to be controlled by Wi-Fi without the need for a headset, It also has powerful detachable jets that allow Tony Stark to put the damaged ferry back together faster than Spider-Man’s webs.

Were it not for the two-on-one fight that concluded Captain America: Civil War, it’s easy to assume that the Mark XLVI would have had more than enough power to overwhelm Steve Rogers – and that fact alone makes it one of the most powerful Iron Man suits ever built. This suit is so durable that it manages to withstand a fight against Ultron and his minions and still be able to overload the machine that detonates Sokovia, subsequently surviving the raining debris.

This colossal suit is developed by Tony Stark and Bruce Banner (Mark Ruffalo) as a contingency plan in case the gamma-radiated scientist lost control. Powered by multiple arc reactors, the armour is deployed by a satellite named Veronica and assembled onto Tony’s regular armour. Tony Stark develops the infamous Mark 42 Iron Man suit, an armour inspired by Marvel’s “Extremis” storyline that he can manipulate remotely with subcutaneous chips implanted on his arms that control the individual parts that assemble, one by one, around his body. This feature also allows him to lock the suit onto another person. Not like most of the Iron Man suits seen throughout the comics have been modular in some way, shape or form, but much like the Shotgun armour, fans never really got a good look at what the Mark XLI was capable of. When it comes to the Marvel Cinematic Universe, the original suit was never really designed as a purely offensive machine. That’s where the Mark XL armour comes in. Despite only appearing for a few moments during the finale of Iron Man 3, the ‘Shotgun’ Armor is notable for its use of rapid-fire repulsor rays – something that’s never been seen in any of Tony Stark’s other suits. Better yet, the Shotgun Armor is the perfect quick-response weapon, with a top speed in excess of Mach 5 to match its excessive firepower. the Mark VII’s thrusters were able to redirect a nuclear warhead through a portal and into deep space, and its payload of mini-missiles was powerful enough to rip a Chitauri Leviathan apart from the inside. Needless to say, the Mark VII quickly became one of the biggest guns in Tony Stark’s ever-growing arsenal.

When the arc reactor in Tony Stark’s chest poisons him, he creates a cleaner and more powerful one — plus a proper armour to go with it. This gives him the bonus advantage of harnessing an incredibly higher energy supply that allows him to add more mobility, more weapons, and more protection to the suit.

The Mark V’s debut appearance is easily one of the best parts of the movie. It may not have all of the different weapon systems or defensive measures of Tony’s other, fully-featured armours, but the Mark V ensured that Iron Man wasn’t tied down to a single location. Plus, with that shiny silver finish, Iron Man 2 gave fans a better Silver Centurion reference than any other film in the franchise. The original Iron Man armour might not be all that advanced compared to most of Tony Stark’s newer suits, but at the time, it was still one of the most advanced pieces of technology ever invented. Not only that, but Stark was able to build the Mark I while captured in Afghanistan and trying to keep a piece of shrapnel from piercing his heart. To say that he was working under pressure is a bit of an understatement. By utilizing Asgardian artifacts, Tony Stark was able to create the Mark XXII armour – otherwise known as the Thorbuster Armor. Modeled after the Destroyer, one of Thor’s oldest and most dangerous foes, the Thorbuster Armor was strong enough to withstand a beating from a god… for a time, at least. One of the many fan-pleasing surprises that Avengers: Endgame brought to fans was Pepper Potts’ own suit of armour. The Rescue armour isn’t as weapon-heavy as most of Tony Stark’s suits in the comics, but the MCU did give Pepper all the features Iron Man is known for, such as the floating ion cannons and the uni-beam, courtesy of Tony’s determination to protect Pepper and their daughter Morgan